An inappropriate response to environmental allergens or antigens, or a defective epithelial barrier (allowing otherwise harmless exposures to persistently trigger a mucosal reaction), have been proposed as underlying mechanisms for the airway dysfunction of chronic rhinosinusitis with nasal polyps (CRSwNP) (6-8). Previous experiments have shown elevated expression of Interleukin (IL)-25, IL-33, and thymic stromal lymphopoietin, and altered ciliary morphology and activity in CRSwNP mucosa, indicating that mucosal inflammation and MCC dysfunction may synergistically interact to produce the observed clinical symptomatology and pathology of CRS (7-14).

Environmental allergens, pollutants, and concurrent viral infection may further potentiate innate airway defence dysfunction. Viral infection with superimposed allergens down-regulates the TLR3 mediated anti-viral pathways (2,15), causing enhanced viral replication, cell death, and greater clinical symptomatology, particularly in chronic airway diseases such as asthma (16-18), and is thought to contribute to seasonal variation in CRS exacerbations (19). Likewise, this combination has been shown to alter epithelial inflammation, with a greater release of IL-8, IFNα, and other cytokines (15,20,21). However, there have been conflicting reports of both a deficient (21), or exaggerated (20) IL-6 response. Hence it would be worthwhile to further characterise the effect of rhinovirus infection and common environmental exposures, such as dust mite and pollutants, on both the inflammatory response and other innate defences.

The multi-challenge, air-liquid interface (ALI) model of this study was established to create an in-vitro model of the aetiology of CRSwNP and its differences in responses from normal tissue, allowing for future therapeutic assessments.

Patients included in this study either were undergoing endoscopic surgery for the removal of tumours and had no sinus disease and had nasal mucosa collected, or were CRSwNP patients undergoing endoscopic sinus surgery for treatment, with polyps instead collected as the tissue sample. Patients on systemic or intranasal steroids, macrolide antibiotics, anti-histamines, or other immune-modulating drugs 4 weeks prior to surgery, or with a history of immunological disorders or other sinus diseases were excluded from the study. Tissue collection was carried out during the 2015 calendar year from patients of three ENT surgeons in Sydney who satisfied the inclusion and exclusion criteria.

ALI cultures utilise a semipermeable culture well insert to expose cells to air and thus create an environment more representative of in vivo conditions (Figure 1). These were grown from the harvested tissue as previously described (22). Briefly, tissue samples were rinsed in MEM media (Gibco, USA), carefully dissected to remove adherent bone, cartilage, blood, and mucous extract mucosa, and then cut into small pieces. These were dissociated in MEM media with 1.4 mg/mL of protease isolated from Streptomyces griseus (Sigma-Aldrich, USA) and 10 µg/mL DNAse (Roche Applied Science, Germany) to undergo enzymatic digestion for 1 h at 37 °C, after which 2.5 mL fetal bovine serum (FBS, Gibco, USA) was added to neutralise the enzymes. The supernatant was harvested, centrifuged, resuspended, and seeded in a culture dish for 1h at 37 °C to allow the non-motile non-ciliated cells to adhere to the culture dish. The supernatant containing motile ciliated epithelial cells was then harvested, centrifuged, resuspended, and seeded into a culture flask in 10 mL growth medium [BEBM (Lonza, Switzerland), BEGM SingleQuots (Lonza, Switzerland), 1% penicillin/streptomycin 10K/10K (Lonza, Switzerland), and 0.1% Fungizone antimycotic (Gibco, USA)]. Cells were cultured (37 °C, 5% CO2) with media replacement 24 h later, and subsequently three times a week. 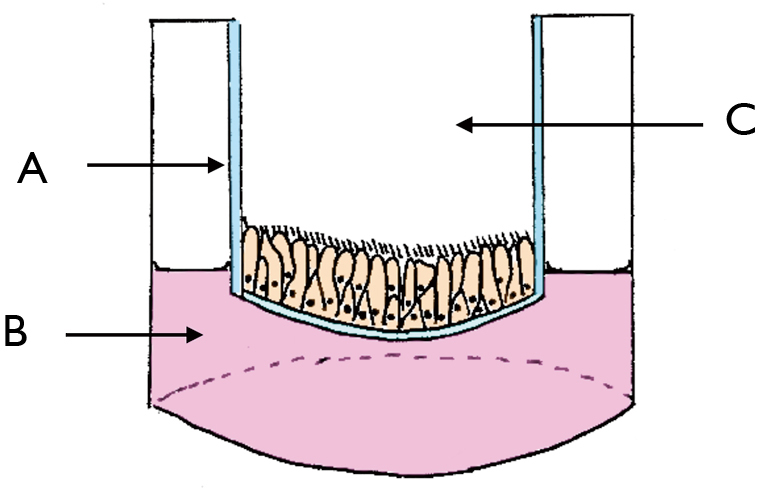 Figure 1 ALI culture as a model of in vivo conditions. Diagramed representation of ALI culture on the Transwell culture well insert (A), separating the well into the basal compartment with media (B), and the apical compartment for air exposure (C). ALI, air-liquid interface.

Once 70–90% confluence was reached, cells were detached with 5 mL trypsin (Gibco, USA) (5 min, 37 °C, 5% CO2), then neutralised with 10% FBS in 10 mL MEM (Gibco, USA), resuspended in differentiation medium [1:1 BEBM (Lonza, Switzerland) and DMEM high glucose (Gibco, USA), BEGM SingleQuots (Lonza, Switzerland) without retinoic acid additive, 1% antibiotic/antimycotic (Gibco, USA), 1.5% bovine serum albumin, and 0.03% of 10 mM retinol (Sigma-Aldrich, USA)], and seeded at a density of 5×105 cells/mL in the apical compartment of Transwell inserts coated with type I collagen (Corning, USA), with 600 µL of differentiation medium in the basal compartment (changed every 2 days). When the apical cells were 100% confluent, the apical medium was removed permanently.

Challenges were applied after viral infection to mimic real-life airway responses, and to accommodate for the longer viral replication and response time compared with acute challenge exposure. Challenges were applied to the wells apically in quantities of 200 µL. Diesel particulate matter (DPM) (standard reference material 1650b, National Institute of Standards and Technology, USA) was suspended in steroid-free differentiation medium at a concentration of 100 ng/cm2 using sonication (20 min, 0.5 Hz, 50 amps; UTR200, Hielscher, Germany). House dust mite (HDM) (Stallergenes, Sydney, Australia) was suspended in steroid-free differentiation medium for an exposure of 6,960 AU/cm2. Steroid-free differentiation medium, or “vehicle”, was used as a control challenge. Wells received either vehicle, DPM, HDM, or DPM + HDM combination as challenges. Challenges were evenly distributed amongst all non-infected and infected wells.

Cytotoxic effects of the virus and challenges were assessed using the Tox7 LDH Cytotoxicity Assay (Sigma-Aldrich, USA), by measuring intracellular LDH release following cell lysis. Viral infection did not cause an elevation in LDH release from cultures. 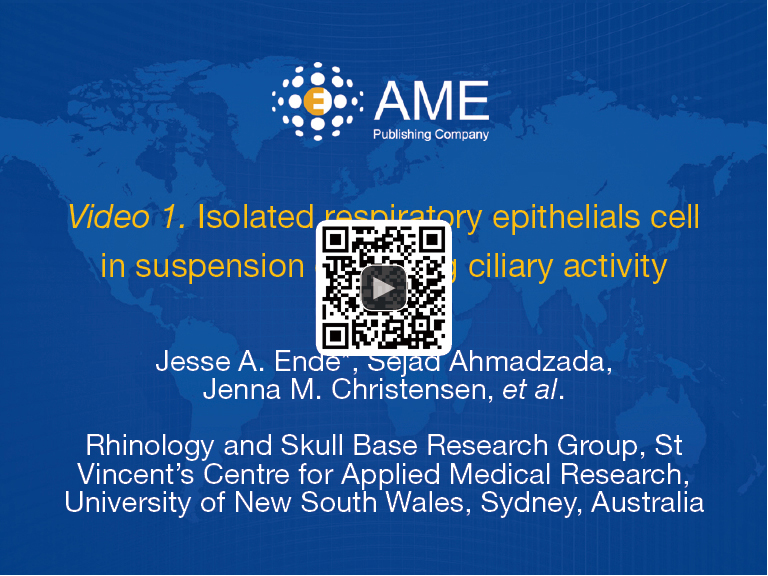 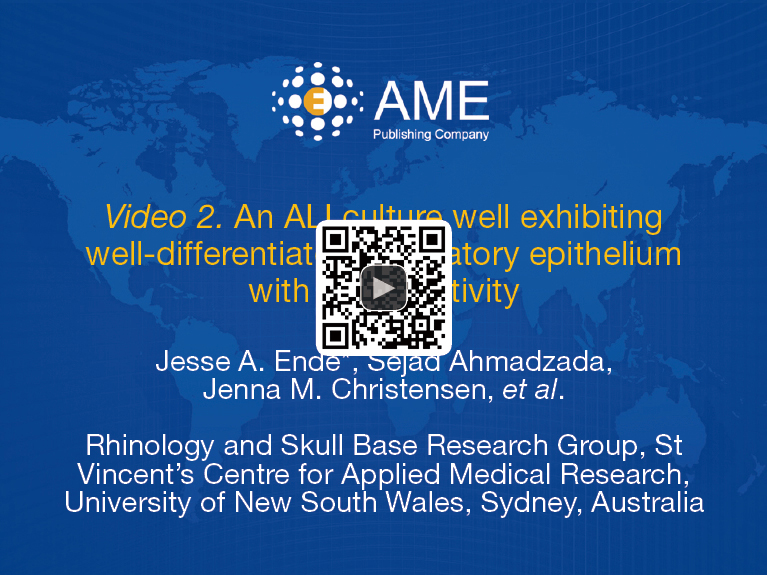 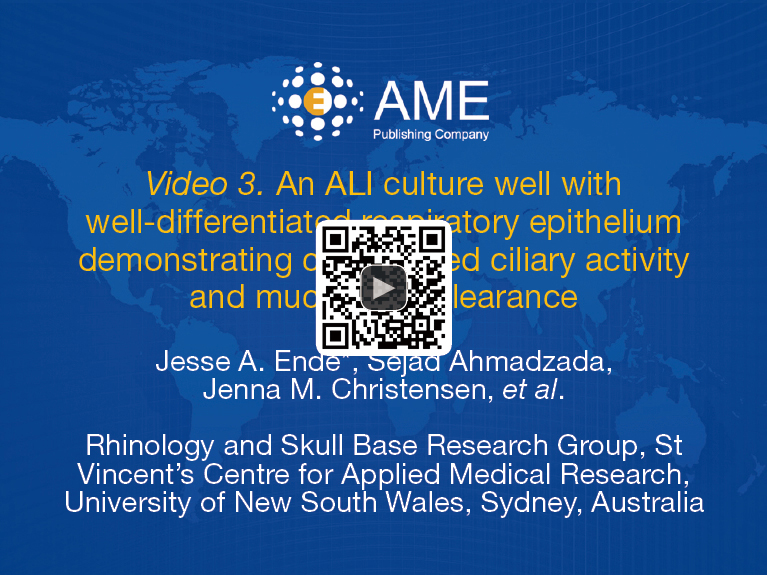 Data analysis was performed using SPSS v22 (IBM, USA). Demographic data between healthy and CRSwNP groups was compared using independent t-tests (continuous variables) or Chi squared analysis (categorical variables). Outcomes were compared between infected and non-infected groups, and healthy and CRSwNP subgroups. CBF was determined to be parametric and analysed using paired t-tests for changes from baseline, independent t-tests for comparison of groups, and ANOVA (with Bonferroni correction) to compare challenge responses within each group. Parametric data is reported as the mean ± standard deviation. IL-6 release was represented as fold change from control wells to account for inter-individual variation in IL-6 baseline levels and release. IL-6 release was determined to be non-parametric, and groups were compared using Mann-Whitney U tests and reported as median [interquartile range, (IQR)]. Challenge responses within each group were compared using Kruskal-Wallis one-way analysis of variance tests.

A total of 204 ALI wells were cultured, with 96 from healthy and 108 from CRSwNP patients. Half of each patient’s culture was infected with rhinovirus, yielding 102 virally infected and 102 non-infected cultures (infected healthy n=48, infected CRSwNP n=54), of which 26 wells of each received challenges of the control medium, DPM, or HDM, and 24 received the DPM + HDM challenge.

The effect of rhinovirus on the response to challenges 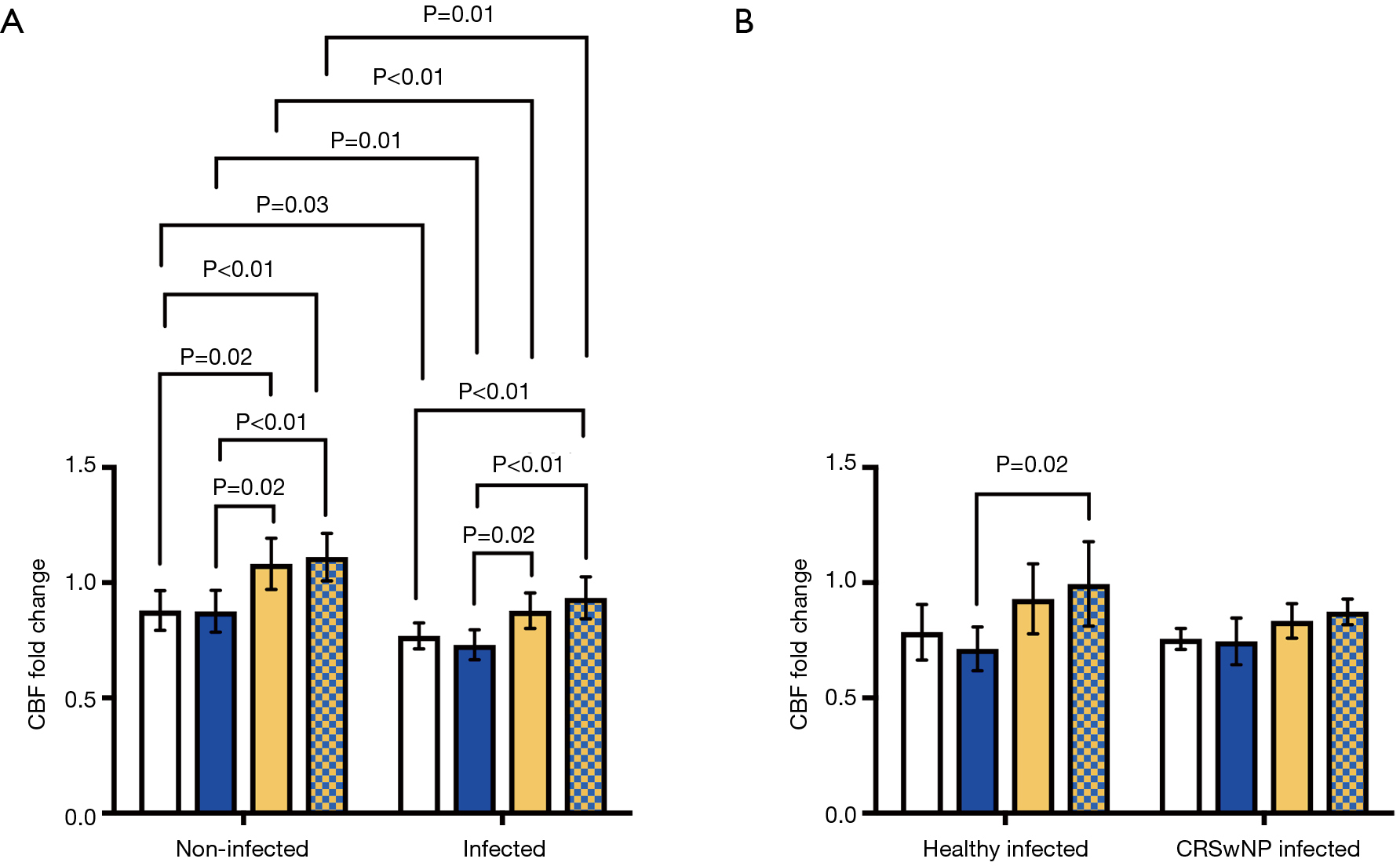 Viral infection and challenges responses in healthy and CRSwNP cultures

However, overall there was no difference in the CBF response between the challenges amongst virally infected cells from both the healthy or CRSwNP groups (Figure 6B).

Although differences exist between infected and non-infected cells, apical IL-6 release did not differ between the challenges within these groups, nor within infected healthy and infected CRSwNP groups (Figure 7).

Rhinovirus infection altered the innate defences of the airway epithelial cells cultured at ALI. At baseline, the CBF of all virally infected wells was higher than all non-infected wells (Figure 5A). Interestingly, the CBF at baseline of CRSwNP cells was lower than healthy cells in both the non-infected and infected groups (Figure 5B), despite several weeks of culturing ex vivo prior to experimentation. This could suggest the presence of an intrinsic defect of the CRSwNP cells regarding their MCC function, which may contribute to the disease state in this population. The influence of local microflora had long been removed due to cell washes and antibiotics in culture media, and cell turnover had since occurred several times.

For all challenges, the CBF fold change from baseline remained lower in virally infected cells compared with uninfected cells at 24 h post-challenge. This may indicate an altered chronic adaptation to environmental challenges with concurrent rhinovirus infection, which has been found in previous studies (15,27,28). Additionally, the CBF of infected wells was significantly lower compared with baseline, while for non-infected wells overall there was no difference except with DPM challenge. Together, this implicates rhinovirus infection as being a substantial contributor to an altered environmental epithelial response.

Following challenge exposure, the CBF and IL-6 responses to challenges of infected healthy and infected CRSwNP wells were similar. This suggests that CRSwNP mucosa does not show a deficient innate response in viral infection to these particular challenges compared with healthy sinus mucosa. Previous studies have shown both similar, and differing responses in terms of IL-6 release (29-32), and it is therefore possible that these interactions are complex, with variation also based on the specific type of challenge applied.

With DPM alone failing to produce an epithelial reaction, it is likely HDM was the main contributor to the challenge response. HDM dosing was based on a previous clinical study eliciting nasal symptoms with doses both lower and higher than that used in this experiment (33). This makes it possible that the translation from in vivo to in vitro produced these unexpectedly strong epithelial reactions. Additionally, as this dose of DPM has previously been seen to increase IL-6 release in ALI cultures (34), it is surprising that an effect on cilia was not able to be observed, perhaps owing to insufficient disintegration or dispersion in solution. Together, these results indicate the effects of HDM may have masked the responses to other challenges in terms of ciliary function. Considering that the amount of exposure to an environmental challenge may be important for determining epithelial responses, future experiments could modify these doses to normalise their relative effects and possibly reveal a synergistic interaction. With greater patient numbers, it would be interesting to perform subgroup analysis accounting for clinical sensitisation to HDM, and comparing epithelial responses.

IL-6 release was significantly elevated with rhinovirus infection in all wells, and for infected CRSwNP wells for the challenges of control, DPM, and HDM. This supports previous experimental findings of increased IL-6 with viral infection (30,31). However, with no difference between the challenge responses it appears rhinovirus was the main factor in this result. This disagrees with previous studies suggesting a positive synergistic effect of challenges, and could again be explained by the different types of challenges applied, or the use of submerged cell lines (rather than primary tissue) in some previous experiments (20,35). Additionally, other results have demonstrated impaired IL-6 release in virally infected wells (21). With clinical findings of elevated IL-6 in nasal washes during CRSwNP exacerbations (36), the findings of IL-6 release with viral infection support the role of rhinovirus in contributing to these episodes. However, these conflicting results require further investigation to characterise the inflammation occurring in CRS, viral infection, and challenge exposure concurrently.

Cytotoxicity was primarily assessed to control for its potential confounding effects on cytokine release. While LDH was elevated for the HDM and HDM + DPM challenges, and did not differ from the positive control in these cases, there was no corresponding pattern of IL-6 release, suggesting cell cytotoxicity did not confound the levels of detected cytokines. Cytotoxicity however, is less important for CBF, as this is a function of the beating frequency of the cilia, rather than their absolute numbers.

Primary cultures are more representative of cell behaviour compared with cell lines, which through serial passaging have undergone phenotypic changes (1). As a result of the in vivo physiological conditions of ALI, the cultures in this study more accurately represent the responses of virally infected airway epithelium. However, a single-cell model such as this cannot be used to assess the adaptive immune response in vitro, which may be central to the complex immune response of the airway mucosa.

Rhinovirus infection and CRSwNP are characterised by ciliary dysfunction and maladaptive inflammation. Superimposed environmental challenges likewise contribute to disease burden. This study has demonstrated the impacts of rhinovirus and HDM as potential triggers for airway disease, however true synergism in CBF impairment or IL-6 release was not seen.

Dr. Erika Strazdins for her support throughout the entirety of the project.

Conflicts of Interest: RJ Harvey is consultant with Medtronic, Olympus, and NeilMed pharmaceuticals. He has been on the speakers’ bureau for Glaxo-Smith-Kline and Arthrocare. J Rimmer has honoraria with Sanofi Aventis, Novartis, Mundipharma, BioCSL, and Stallergenes. The other authors have no conflicts of interest to declare.