Head and neck cancer (HNC) is the sixth most common cancer in the world with squamous cell carcinoma (SCC) being the most common type affecting the head and neck region (1). Recent advances in diagnostic and multimodal management of Head and Neck Squamous Cell Carcinoma (HNSCC) has resulted in better locoregional control and lower recurrence rates. However, survival outcomes have not demonstrated significant improvements (1-4). This may be attributable to patients with HNSCC being at an increased risk of developing a second primary malignancy (SPM) (3-5). Epidemiological risk factors such as tobacco and alcohol use, genetic susceptibility and/or the choice of different treatment modalities may account for SPM (1). Risk factors associated with HNSCC include tobacco and alcohol use, human papilloma virus (HPV) and Epstein-Barr virus (EBV) in oropharyngeal cancer and nasopharyngeal cancer (6-8).

The literature reported that the overall survival rate in this patient population continues to be adversely affected by SPM regardless of its location. The role of panendoscopy as a screening tool is pivotal in the early detection of SPM and subsequent treatment with curative intent. Nevertheless, this clinical entity still portends to poorer overall survival despite the substantial improvement in disease free survival rate (1,3,4).

In this study, we report the incidence of SPM (synchronous and metachronous) in HNSCC patients and association between the epidemiological risk factors and the survival outcomes.

We analyzed 790 patients with HNSCCs recorded in the Ear Nose and Throat (ENT) Microsoft Access database at the ENT Department at Fremantle Hospital, Western Australia, between 1993 and May 2011. All patients with cancer who received services through the Department were recorded in this Database, which included the pathology, treatment and follow-up.

The data was extracted into Microsoft Excel for screening and preliminary analysis, and subsequently imported into Statistical Package for Social Sciences (SPSS) version 14 (IBM Corporation, New York, USA) for analysis. Descriptive statistics and Kaplan Meier survival analysis were used as appropriate, and a P value of 0.05 was considered statistically significant. Sites were classified according to Table 1 using free text descriptions and The International Statistical Classification of Diseases and Related Health Problems, Tenth Revision, Australian Modification (ICD-10-AM) codes entered into the Head and Neck Oncology Database (see Table 2 for Morphology Codes included) (9). Cases were deemed as synchronous, metachronous or metastases based on the Warren and Gates (10) criteria, which was modified by Hong et al. (11,12). Classification for synchronous, i.e., multiple primary HNSCC required (I) each neoplasm to be geographically distinct (separated by normal tissue), and (II) the possibility that the second primary represents a metastasis, or a local relapse must be excluded. A second primary must be separated by at least 2 cm of normal epithelium or occur at least 3 years after the first diagnosis. Any new lung tumor must be solitary and histologically distinct from the first, unless it occurred 3 or more years later. Synchronous carcinomas are second neoplasms occurring at the same time or within a 6-month period of the primary lesion. After this period, they are considered metachronous neoplasms. 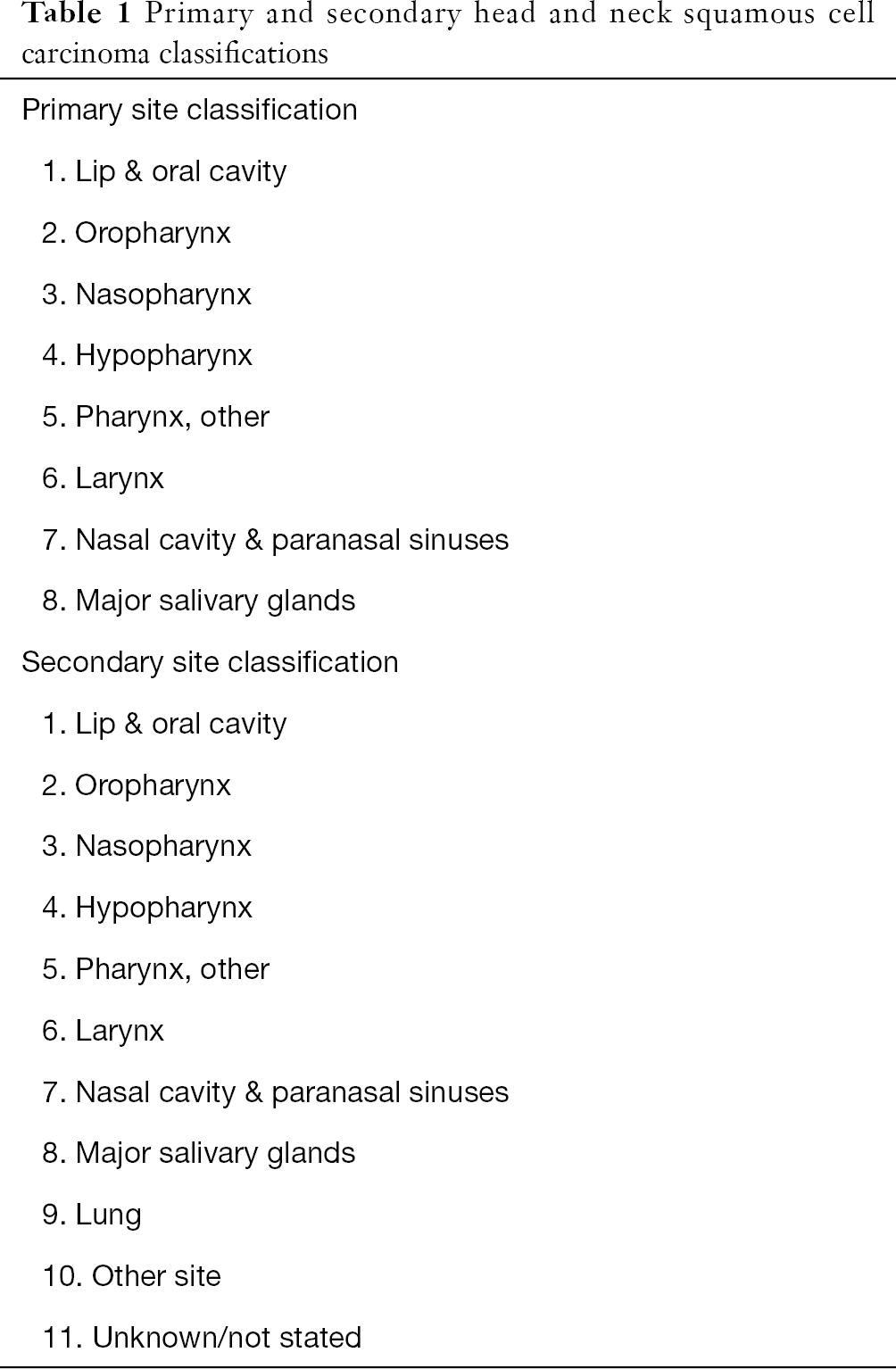 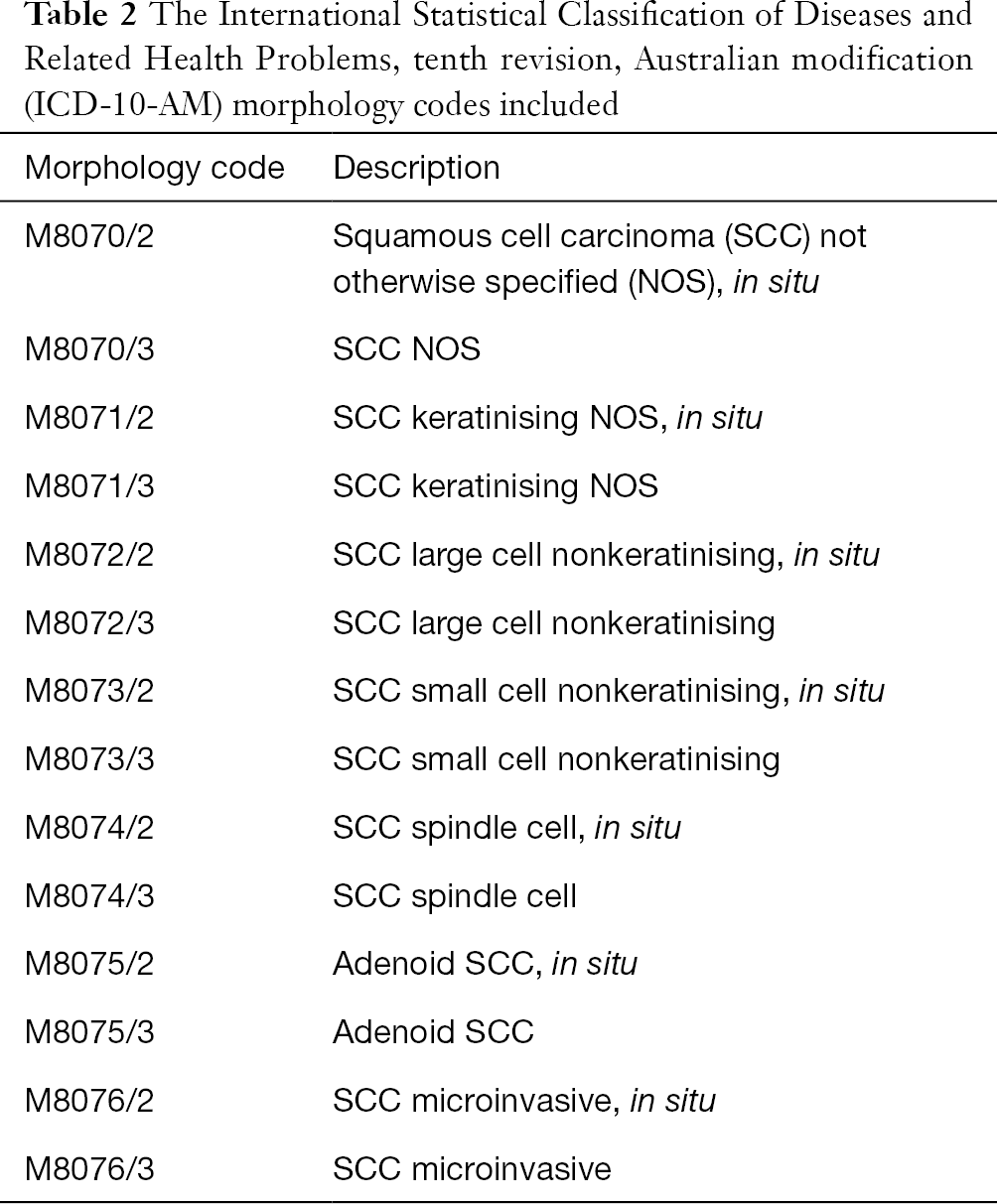 In the era of rapid advancements in diagnostic and therapeutic management for HNSCC, and with better detection and locoregional control rates, the overall survival rate has not experienced significant improvement (1,13). Similar studies have shown that the incidence of synchronous and metachronous carcinoma ranges from 8% to 21%, showing that its presence is a poor prognostic factor with a subsequently poor overall survival rate (1,4,13,14).

Excluding skin cancers, world-wide, cancer of the mouth and pharynx have been ranked between fifth and sixth overall in the world (behind lung, stomach, breast, colon and rectum, and cervix/corpus uteri), and is the sixth leading cause of cancer mortality (21-23). In developed countries, men are affected two to three times as often as women, possibly due to higher use of alcohol and tobacco.

Our study revealed 5.9% (44 patients) patients developed SPM (29 with synchronous, and 15 with metachronous tumor) within a median follow-up period of 25 months.

Researchers looking at risk of SPM following HNC (24,25) have reported 1.3% of patients (1,294) developing a SPM within a mean 4.9-year follow-up period. This exceeded their expected number of 115.75, and cumulative risk was 36%. However, meta-analysis (26) has found an overall SPM prevalence of 14.2%, with the majority being metachronous and oral cavity. Our findings fall within expected limits for SPM occurrence. Our results revealed a higher occurrence of synchronous (3.7%), rather than metachronous (2.3%) malignancy. Time to diagnosis (early or late) and TNM classification, may impact on the synchronous and metachronous proportions.

Warren and Gates [1932] looked at 1,259 cases of multiple primary tumors arising from unrelated sites (of which 40 were their own cases), and calculated multiple malignancy to be 3.9% of all cancer cases (10). These figures have remained stable over time.

Furthermore, a meta-analysis of the Washington University Department of Otolaryngology Head and Neck Tumor Registry and 24 studies reported an overall SPM prevalence of 14.2% in 40,287 patients (26). Most tumors were metachronous, with oral cavity tumors having the highest rate of SPM.

Primary tumors of the lip and oral cavity were most common (37.8%) and these most commonly recurred as synchronous and metachronous tumors again in the lip and oral cavity. While only 1.8% of patients reported neither tobacco nor alcohol use, our findings support previous research that HNC relating to tobacco and alcohol use have SPM pertaining to the oral cavity (2,28). This is due to the chronic and accumulative toxic insult to the oral mucosa by the tobacco and alcohol use. Those patients who continued to smoke after the diagnosis of the HNSCC with SPM had poorer overall survival rates.

Due to both the rate of SPC and the majority of synchronous and metachronous tumors occurring in the oral cavity, oropharynx, larynx and lung, clinical attention must focus on prevention. Once malignancy is established, the focus must shift to regular surveillance. Patient education on smoking and alcohol cessation may reduce incidence of multiple primaries.

Limitations of this study include that being a retrospective analysis, while data was screened; there were limitations on information captured. The data was dependent on the accuracy of personnel entering the data, which resulted in incomplete and omitted fields. Patients with multiple or important omissions were excluded from analysis. The ENT Database may not include all patients that presented to our institution. Unfortunately, there was missing data for tobacco and alcohol use which reduced the strength of association and the deductions that could be made. Some fields were predetermined. For example, pack years could be calculated, however alcohol use was recorded subjectively (e.g., socially vs. heavily), which depends on the honesty of the patient and interpretation of the clinician collecting the data.

While this study found a lower rate of SPM in patients with HNSCC than some other studies, there is a clear association between smoking and the development of HNSCCs. Fatality in patient with HNSCC is high and the development of a SPM has a higher fatality than without. Once malignancy is established, the focus must shift to regular surveillance. Given the anatomical location of HNSCC and SPC, prevention and early treatment of SPC will impact on a patient’s quality of life. Patient education on smoking and alcohol cessation may reduce incidence of multiple primaries. While this study did not look at the role of viruses (such as HPV and EBV) in the development of HNSCC, growing research supports this association, and future data collection could include DNA testing for such viruses.

This retrospective study demonstrates that the SPM occurred at the rate of 5.9% and that there is a clear association between tobacco and alcohol use with the development of HNSCC with SPM. In our patient population, 3.7% developed synchronous and 2.3% metachronous malignancy. Metachronous malignancy was associated with much poorer overall survival rate. This study contributes to the literature in that it strengthens the notion that public health efforts should target alcohol and smoking cessation in Australia, and that our study specifies specific malignancies that patients are at risk for.

Ethical Statement: This study was exempt from the Fremantle Hospital ethical review board due to the negligible risk on collections of non-identifiable data.