In oropharyngeal SCC, HPV positivity represents a distinct biological entity, both in terms of its underlying genetics and clinical behaviour. Next generation sequencing has enabled researchers to begin identifying biomarkers associated with HPV-positive and negative SCC, which can aid in predicting tumour behaviour as well as offering potential targets for treatment in the future. HPV positive tumours have already been demonstrated to have lower mutation rates than their HPV-negative counterparts and mutated genes rarely overlap between these two groups (7,8).

P16, a cyclin dependent kinase inhibitor, is frequently underexpressed in HPV-negative oropharyngeal SCC and overexpressed in HPV positive tumours. Thus, P16 is utilized as a first-line test for determination of HPV status as well as serves as an independent prognostic tool (9,10).

Currently, the gold standard of care of HPV positive cancers involves either surgery with adjuvant radiotherapy +/− chemotherapy or definitive concurrent chemoradiotherapy (11,12). HPV positive oropharyngeal SCC is associated with an improved prognosis and better response to treatment. This finding has been replicated in sinonasal malignancy (13) but remains to be proven in other subsites. Despite this association, a small subset of HPV-positive patients have been demonstrated to have less favourable outcomes. Whilst tobacco smoking has been implicated as a risk factor for poorer outcomes (14,15), few other poor prognostic factors in HPV-positive SCC have been described in the literature. Approximately 10% of HPV positive patients are at high risk of developing distant metastasis and whilst this rate is similar to that of HPV-negative tumours, metastasis in HPV positive cancers tend to occur later and be more disseminated (16-18). This study aims to systematically review the literature and assess the evidence for known biomarkers in HPV positive neoplasia of the upper aerodigestive tract (UADT), that may aid in predicting which patients may go on to have poorer outcomes or respond poorly to treatment.

A systematic review was performed to evaluate the literature regarding prognostic biomarkers in HPV positive neoplasia of the UADT. The methods of this review were in keeping with PRISMA guidelines (19) and/or the Cochrane Handbook for Systematic Reviews of Interventions where applicable (20).

Studies containing original data pertaining prognostic outcomes of any biomarkers in HPV positive neoplasia of the UADT were considered for inclusion in this study. HPV-positive status was defined by polymerase chain reaction (PCR), in situ hybridization (ISH) or P16 immunohistochemistry (IHC). No age or comorbidity restrictions were applied. Studies assessing biomarkers in both HPV-positive and negative neoplasia were included only if they reported extractable data pertaining specifically to HPV-positive tumours. Case series, case-control studies, crossover studies, cohort studies and randomized controlled trials (RCTs) were included. Only manuscripts published in English were eligible; reviews, guidelines, letters, and editorials with no original data were excluded, as were case reports, conference abstracts, in vitro and animal studies.

A search strategy was designed for each database (Table 1) to identify all studies evaluating prognostic biomarkers of HPV-positive neoplasia of the UADT.

One author (PL Sacks) reviewed and selected trials found in the searches and evaluated them against the inclusion criteria. In cases where PL Sacks was unsure as to whether the trial was relevant, a second review author (R Harvey) was consulted. Initial screening was upon title review, with brief abstract review if there was uncertainty. The remaining selection underwent stringent abstract review, with discussion between reviewers if uncertain about relevance of individual studies. The full texts of the subsequent selection were analyzed, with study exclusion if not relevant.

Proportions of individual biomarker expression were calculated manually. Hazard ratios and 95% confidence intervals for each prognostic outcome were extracted from manuscripts when available.

A qualitative synthesis was performed where a thematic organisation was created based on endpoint of each study. Outcomes assessed included treatment effects, severity effects and overall mortality.

The search strategy found 4,702 records. This was reduced to 3,327 after the removal of duplicates. Title and abstract review excluded a further 3,100 articles, leaving 227 full text articles to be assessed for eligibility. There were 31 studies included in the final qualitative synthesis (Figure 1). All 31 articles were case series and all investigated malignant disease of the UADT. Twenty-four articles looked exclusively at oropharyngeal or oral SCC. Characteristics of included studies are described in Table 2. 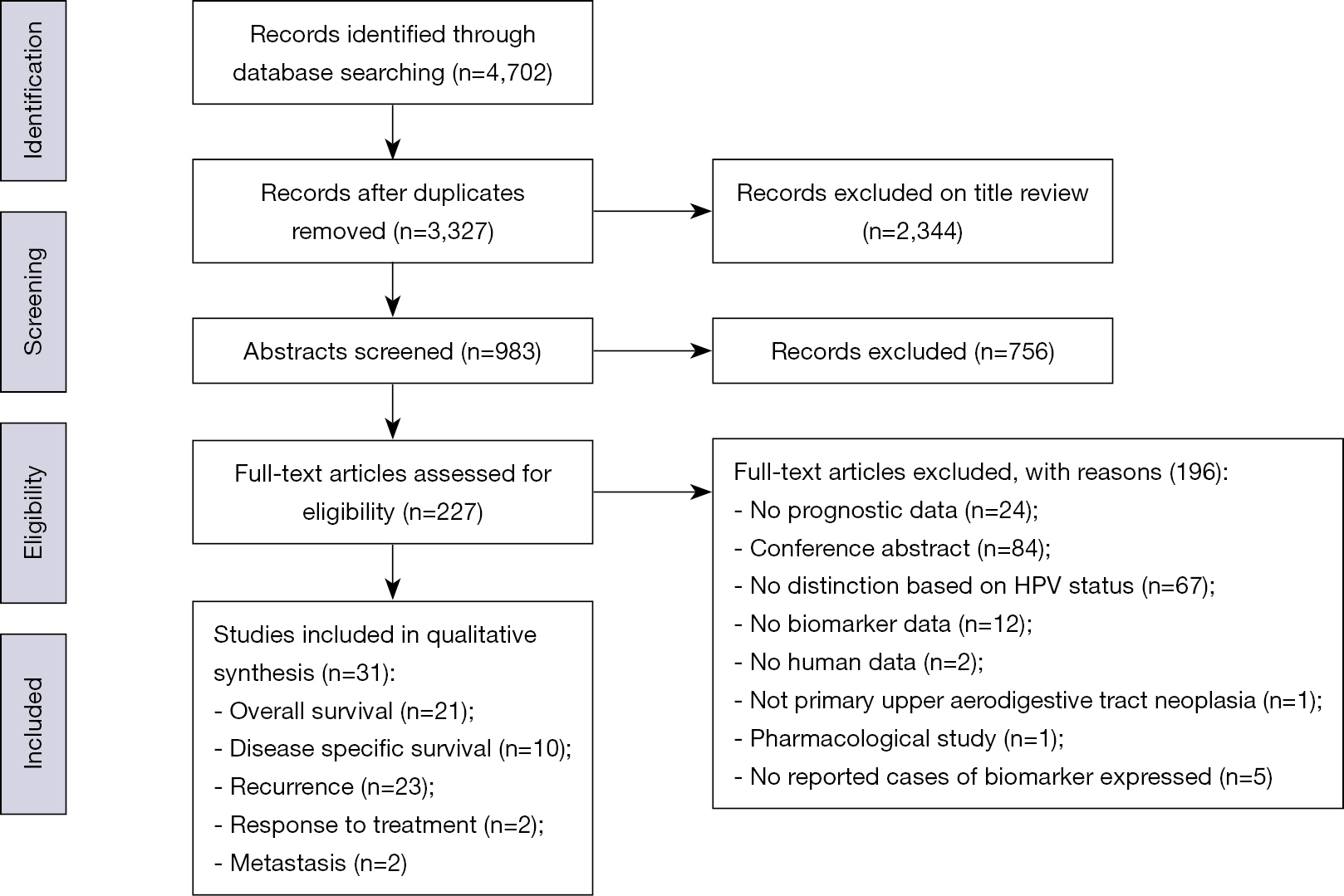 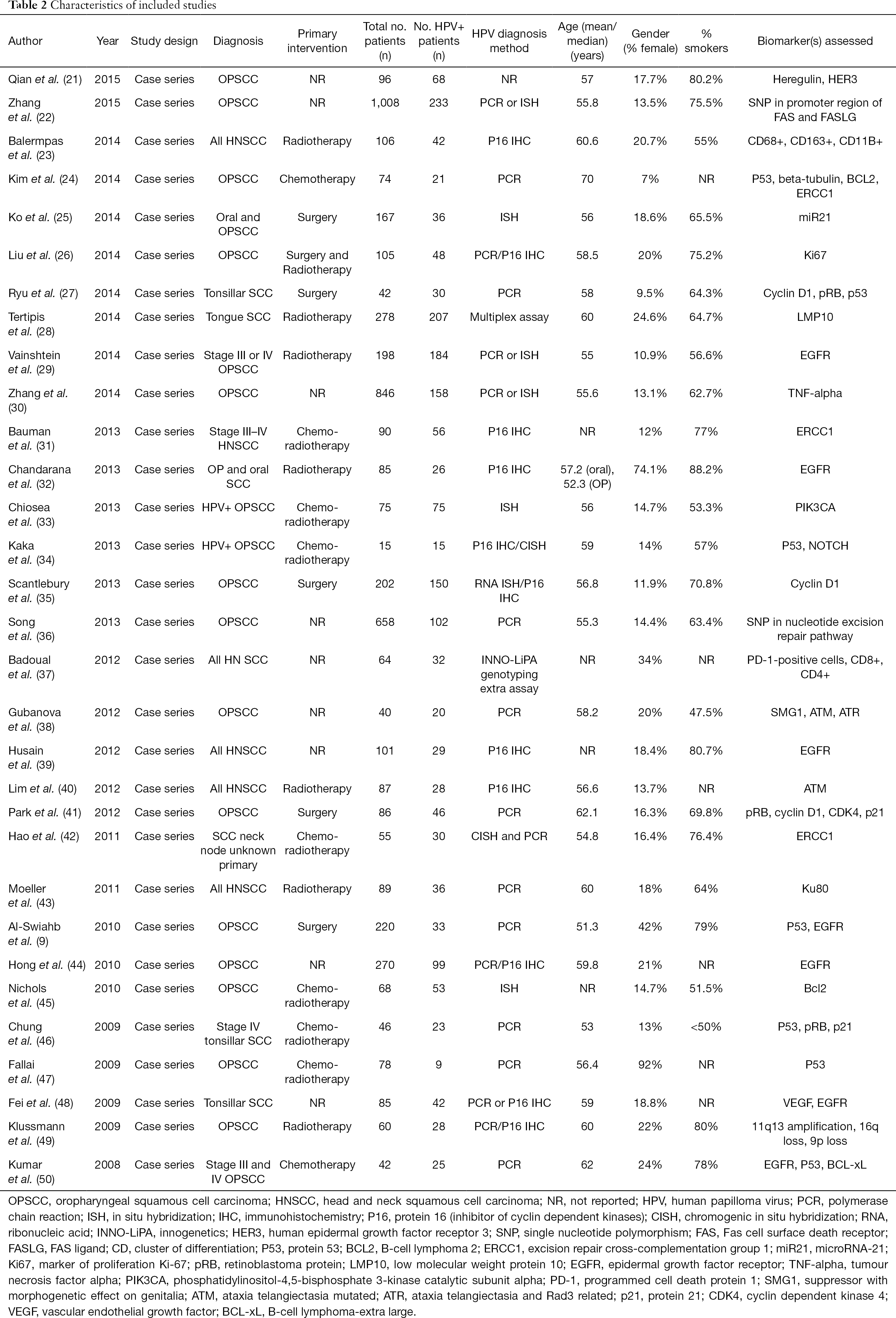 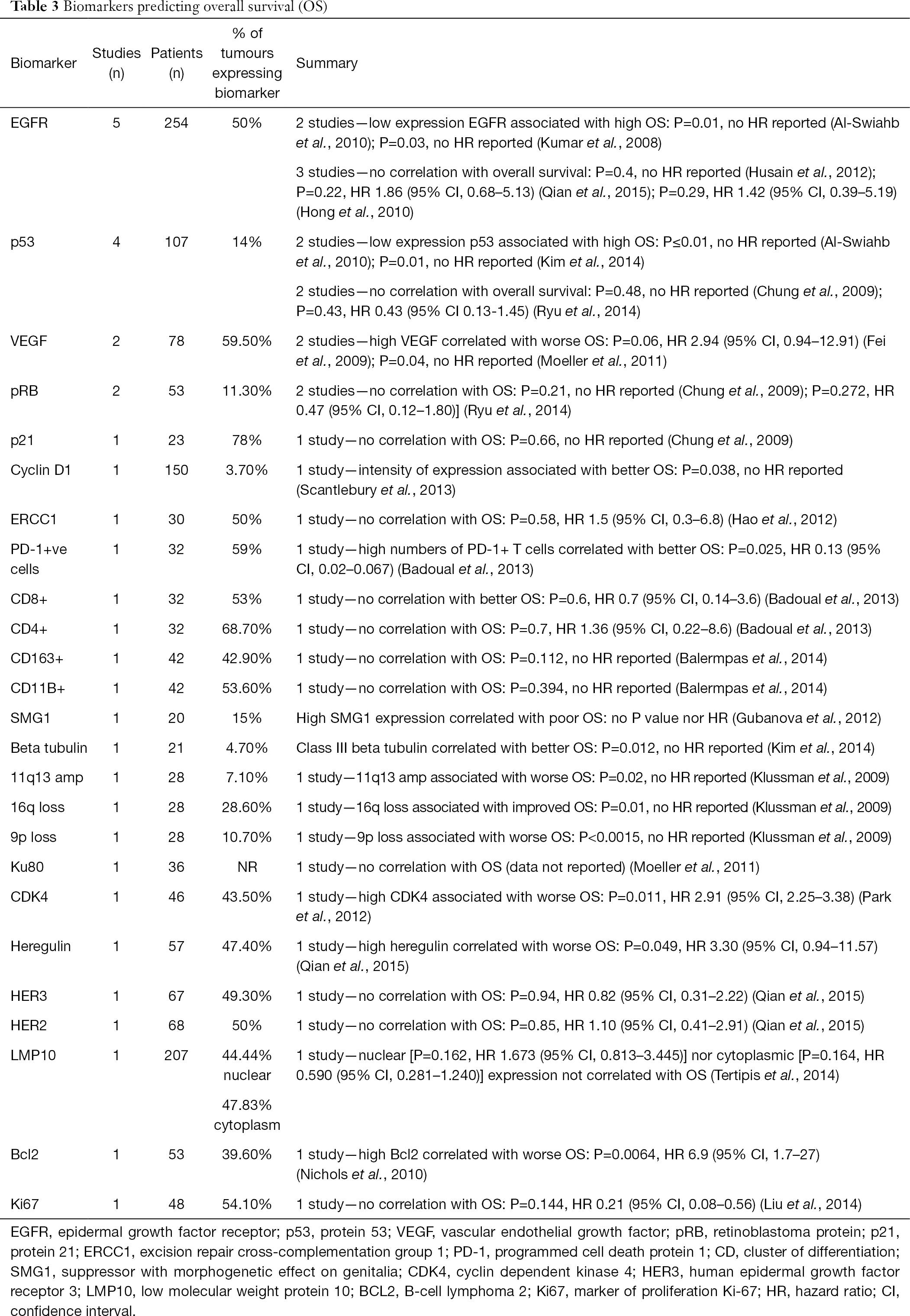 There were ten studies evaluating disease specific survival with a total number of eight biomarkers investigated. EGFR was evaluated in three studies, including a total of 93 patients and correlated with worse disease specific survival in all three studies (32,48,50). Correlations of other biomarkers evaluated in less than two studies can be found in Table 4.

There were two studies evaluating rates of distant metastasis with four biomarkers investigated in total. Only NOTCH was found to be lower in patients developing distant metastasis (34) with p53, CD163 and CD11b showing no correlation (23,34) (Table 7).

It is well described that particularly in the oropharyngeal literature, HPV-positive neoplasia represents a distinct clinical and biological entity from that of HPV-negative neoplasia. When functioning properly, p53 responds to cellular injury resulting in cell cycle arrest, attempted DNA repair, and, if DNA repair is ineffective, apoptosis. Mutations in p53 have been well established in HPV-negative SCC with prevalence in the literature to be between 47–100% (7,8,52). In this study, mutated p53 was prevalent in only 14% of HPV-positive cases. Overexpression of p53 was not found to be a reliable indicator of prognosis in this review with studies demonstrating mixed results. This contrasts with that of HPV-negative neoplasia in the literature in which p53 mutation has been demonstrated to be a poor prognostic indicator (53,54). EGFR activation induces cellular proliferation and prevents apoptosis. In the current review, EGFR overexpression showed 50% prevalence amongst HPV-positive patients, compared to more than 90% of HPV-negative or undifferentiated patients in the literature (55,56). Studies evaluating the prognostic value of EGFR showed mixed results in HPV-positive neoplasia, again contrasting the undifferentiated literature (55,56). Whilst there are a vast array of studies appraising prognostic biomarkers in UADT neoplasia, few studies differentiated between HPV-positive and negative tumours despite these essentially representing distinct pathologies. In this review, there were no biomarkers that reliably demonstrated prognostic value in HPV-positive tumours specifically in multiple studies.

All thirty-one included studies evaluated SCC of the UADT. There were no studies that met the inclusion criteria that evaluated prognostic biomarkers in HPV-positive benign neoplasia such as IP. Laryngeal papillomatosis is a relapsing remitting growth of the upper respiratory tract and is a benign manifestation of HPV. Recent studies have documented a high prevalence (20–50%) of laryngeal dysplasia in patients who have had a diagnosis of laryngeal papillomatosis (57-59). Whilst HPV has been implicated in the pathogenesis of IP and its malignant transformation to SCC, studies have not consistently demonstrated a true connection between the virus and IP nor whether or not HPV-positive IP behaves like HPV-positive malignant neoplasia, representing less aggressive disease (4-6).

Limitations in this analysis of the literature included the heterogeneity of the included studies such as differing primary modes of treatment, different population severity and variable follow-up periods. This restricts comparison of the studies and increases risk of confounding. Whilst there were many different biomarkers assessed in the various studies, few of these had more than one study to compare results. Meta-analysis was not considered appropriate due to the heterogeneity of populations, treatments and disease. Exclusion of studies that did not specifically examine HPV-positive neoplasia as distinct from HPV-negative neoplasia may have limited results, as the majority of studies identified in the search did not differentiate between these groups in their analysis.

It is well established that HPV-positivity correlates with improved prognosis in oropharyngeal SCC. However, there are no reliable biomarkers that can predict which tumours may fall into the more aggressive subset in this group. Further research is required to establish reliable prognostic biomarkers of HPV-positive SCC of the UADT. Furthermore, the influence of HPV on the behavioral or oncogenic influence in benign papilloma has yet to be fully defined.