Patel and Nouraei first described, in 2015, the use of THRIVE in prolonging apnoea in preparation for intubation of patients with a difficult airway (1). Several studies have now demonstrated that THRIVE allows enough time for short procedures such as panendoscopy and subglottic stenosis dilatation with reported apnoea time ranging from 18–65 minutes (1,2,4). This has extended the application of THRIVE beyond simply using it for pre-oxygenation. However, numerous authors have raised concerns about using THRIVE in overweight patients. It is theorised that obese patients have reduced functional residual capacity which may decrease the apnoeic window (1,7). The aim of this study is to analyse the use of THRIVE in a range of laryngeal or pharyngeal surgeries. The secondary aim is to explore patient characteristics that may contribute to the success or failure with the use of THRIVE.

We conducted a retrospective review of all patients who underwent elective pharyngeal and laryngeal surgery using THRIVE as primary airway support for general anaesthesia at Flinders Medical Centre and Flinders Private Hospital between March 2017 to May 2018. The primary outcomes were the successful completion of the operation with the use of THRIVE alone, and the need for alternative rescue ventilation or intubation during the operation. Failure of THRIVE was defined as patients requiring alternate airway management such as bag and mask ventilation, jet ventilation or intubation with an endotracheal tube. Other details collected were patient demographics and medical history. These were used to determine whether specific patient characteristics predicted the successful use of THRIVE in upper airway surgery.

It was a joint decision between the anaesthetist and the surgeon to use THRIVE in these patients. All patients received pre-oxygenation prior to their procedure. Patients were placed on OptiflowTM (Fisher & Paykel, New Zealand) at lower flow rates of 30–40 L min−1 as pre-oxygenation. The duration of pre-oxygenation was often poorly documented in the case notes. The rationale for lower flow rate during pre-oxygenation was for patient comfort. All patients received total intravenous anaesthesia with opioid analgesia and propofol infusion. Neuromuscular blockade (rocuronium, vecuronium or mivacurium) was used in 84% (n=37) of patients in those without rescue ventilation, and 92% (n=11) in those with rescue ventilation. Sugammadex was used for reversal for those who received neuromuscular blockade. Flow rate was increased to 70 L min−1 once the patient was anaesthetised. Potassium titanyl phosphate (KTP) laser was used with THRIVE in 11 cases. As there is a potential risk of airway fire when using laser with 100% oxygen, THRIVE was turned off for 30 seconds prior to using the laser and resumed afterwards. Patients were grouped into those that successfully completed the operation with THRIVE and those who required rescue ventilation.

Normality of data were assessed using the Shapiro-Wilk test and were not found to be normally distributed. Therefore, the descriptive data is presented as median with interquartile range. Non-parametric statistical tests (Mann-Whitney U test, Pearson correlation coefficient) were used for hypothesis testing. Fisher Exact Test with odds ratios were used to analyse the association between weight and BMI with rescue ventilations. 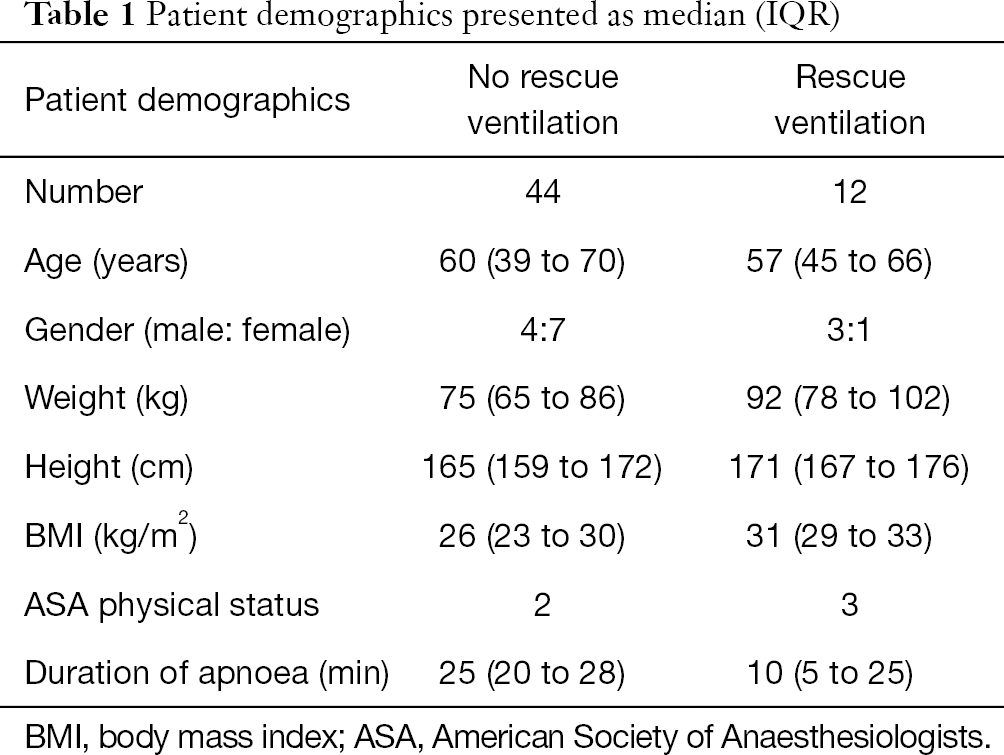 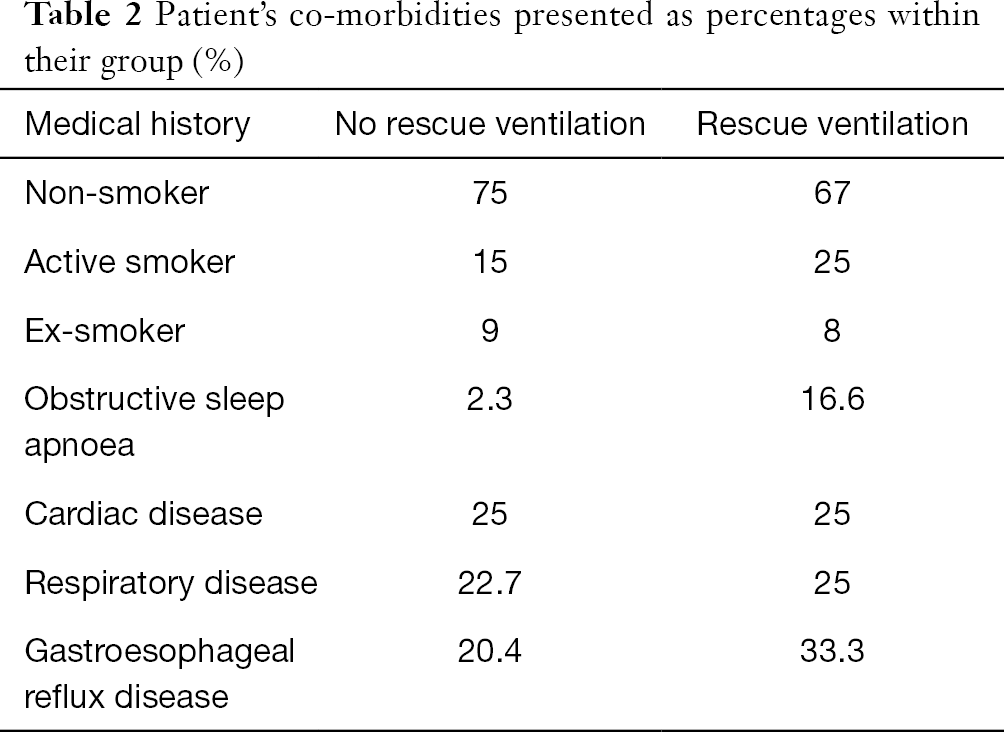 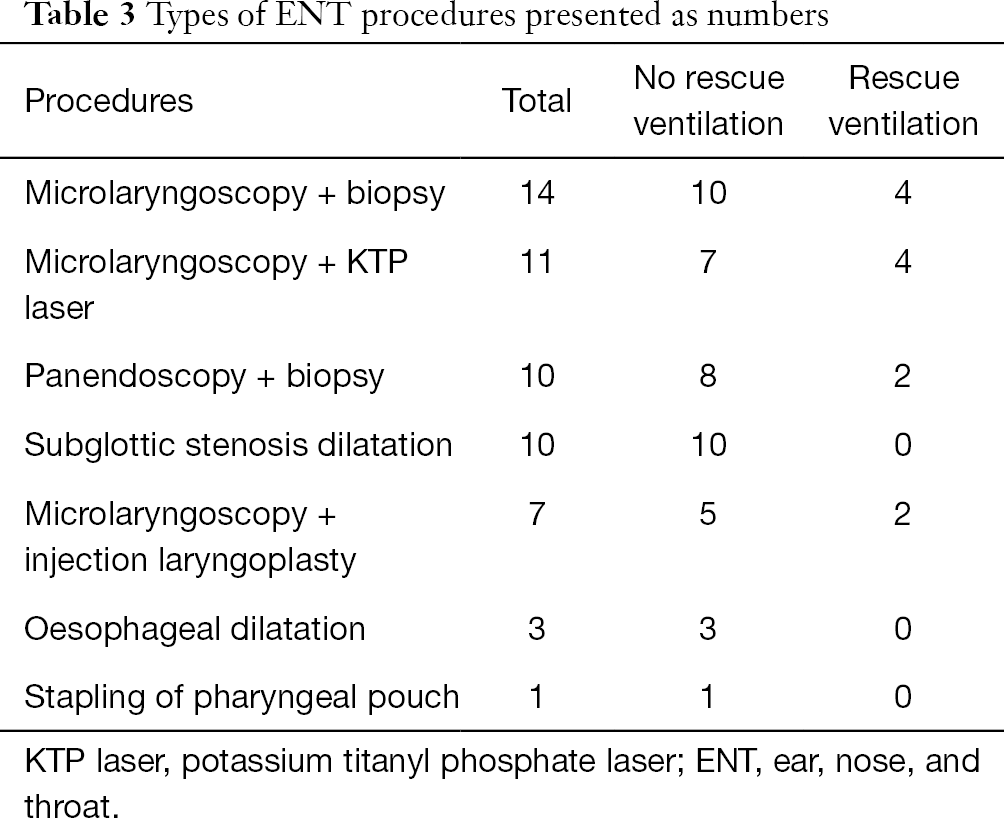 THRIVE has been used in the critical care and the peri-operative environment since it was first described in 2000 (8,9). Despite being available since 2000, its use for apnoeic oxygenation during general anaesthesia is a relatively new concept. The published literature consisting of several case series is supportive of apnoeic oxygenation in a small group of patients requiring upper airway surgery (1-4). The high flow rate allows flow-dependent clearance of carbon dioxide and anatomical dead space (8,10). It has been demonstrated to reduce the rate of carbon dioxide accumulation compared to low flow oxygen therapy, allowing prolonged use as an apnoeic ventilation technique (2-4,11). THRIVE allows excellent access to the surgical field without the vibrational movement and interruptions of jet ventilation or obstruction from an endotracheal tube, thus potentially reducing the operation time (1,8).

In our study, we report a median [range (IQR)] apnoea time of 23 [5–40 (20 to 28)] minutes which is comparable to what has been previously reported in the literature (1-4). Gustafsson et al. conducted a study using THRIVE with 31 patients who had an ASA score of I–II, and a BMI of less than 30 kg/m2. The mean (SD) apnoea time was 22.5 (4.5) minutes (4). Patel and Nouraei utilised THRIVE as a pre-oxygenation technique in 25 patients with known difficult airways until definitive airways were secured and with two patients using THRIVE as their primary airway support. Their median (range) apnoea time was 14 minutes (range, 5 to 65 minutes), though one patient had an apnoea time as long as 65 minutes (1). To et al. utilised THRIVE in 17 cases of subglottic stenosis dilatation with a mean (range) age of 52 years (range, 20–74 years), a weight of 69 kg (range, 53–103.2 kg), and BMI of 27 kg/m2 (range, 20–36 kg/m2). THRIVE was discontinued in one patient due to desaturation. The median (range) reported apnoea time is 18 minutes (range, 10–27 minutes) (2). Lyons also reported a case series of 28 patients with upper airway surgeries similar to those in our study (microlaryngoscopy with biopsy, tumour excision, subglottic stenosis dilatation, rigid bronchoscopy, cordotomy and injection thyroplasty) (3). They had a mean [SD] age of 56.6 [18], BMI of 24.8 (4.5) kg/m2, resulting in median apnoea time (range) of 19 (range, 9–37) (3). The rate of rescue ventilation at our institution was 21%. Even though no patients had long-term complications from requiring alternate airway support, there is a theoretical risk of hypoxaemia or hypercapnoea. It is therefore essential to ensure there are patient-specific rescue plans in place if THRIVE is unsuccessful.

This study demonstrates that THRIVE can be safely used in a wide range of laryngeal and pharyngeal procedures. Microlaryngoscopy and biopsy was the most common procedure performed in our institution when using THRIVE. It was the main procedure performed by Gustafsson et al. (4). Their study demonstrated no patients desaturated below 91%, however, their patient population differed from this study—with an ASA physical status of less than two, and BMI of less than 30 kg/m2. The use of THRIVE with subglottic stenosis balloon dilatation has also been described in several case series (2,3). No patients in our study who received subglottic stenosis balloon dilatation required rescue ventilation. This is the first description in the literature of using THRIVE in proximal oesophageal stricture dilatation and stapling of a pharyngeal pouch. All three patients completed their surgery using THRIVE alone. Lyons et al. and Tam et al. demonstrated the successful use of THRIVE in other laryngeal and airway procedures not included in our study—cordotomy, rigid bronchoscopy and supraglottic stenosis dilatation (3,12). A patent airway is essential for the success of THRIVE, which is provided by suspension laryngoscopy or direct laryngoscopy in the cases described above. Flow dependent flushing of carbon dioxide from dead-space and denitrogenation appears to allow sufficient oxygen reservoir. Therefore, these patients were still able to maintain oxygen saturation without oxygen flow for short durations. The types of procedures were not shown to be significantly associated with rescue ventilation in this study, keeping in mind that our sample size was small.

The main findings from this study indicated that weight and BMI were significantly associated with the need for rescue ventilation. Patel and Nouraei encountered two cases of desaturation—one patient with severe obesity and the other had obesity and tracheobronchomalacia (1). In To et al.’s study, one of the two patients of which they had to discontinue THRIVE use had a BMI of 35 and known difficult subglottic access (2). Both studies recommended caution when using THRIVE in this patient population. Obesity is associated with reduced lung compliance and increased airway resistance due to excess adipose tissue (13). As functional residual capacity and expiratory reserve volume are also reduced in obesity due to mass effect, there is increased intra-pulmonary shunt (7,13-15). The small continuous positive airway pressure of 7 cmH2O provided by the continuous high flow of oxygen in THRIVE may not be enough to prevent atelectasis in this group of patients (1,16).

Theoretically, patients with poor lung function, a smoking history and obstructive sleep apnoea have a higher likelihood of desaturation. The mechanism of THRIVE surrounds the concept of apnoeic oxygenation and flow-dependent flushing of dead space (1,17). Therefore, those with low diffusion capacity and low functional residual capacity could result in a higher chance of failure. Our study does not demonstrate statistical significance for patients with respiratory disease, obstructive sleep apnoea, cardiac disease or gastro-oesophageal reflux. However, our findings are limited by the small number of patients in this study.

Caution should be taken when using laser or electrosurgery with THRIVE. The combination of oxygen rich airflow and electrical heat have the potential to cause an airway fire (18). These incidents have been documented when using diathermy while performing a tracheostomy (19). The only case of fire when using THRIVE has been reported by Onwochei et al. where non-sustained ignition occurred while using monopolar diathermy in the oral cavity (20). High oxygen concentration has been demonstrated to be a major contributor of ignition (21,22).

The retrospective nature of the study, small sample size, heterogeneity of procedures and incomplete documentation were the main limitations of this study. Missing data values due to poor documentation potentially introduces bias in the analysis. In response to these limitations we are designing a future prospective study to address these concerns and limitations.

In summary, this retrospective Australian study demonstrates that THRIVE is safe to be used in a range of laryngeal and pharyngeal procedures. Male patients, patients with a weight more than 80kg regardless of gender, or patients with a BMI more than 30 kg/m2 regardless of gender are more likely to desaturate when using THRIVE, requiring further airway intervention. A larger sample size is needed to validate these findings and determine the significance of other comorbidities when using THRIVE.