The gold standard for voice rehabilitation post-total laryngectomy is tracheoesophageal puncture and placement of an indwelling voice prosthesis (VP). Unfortunately, loss of airway reflexes may result in accidental bronchial aspiration of the VP (1). A VP more frequently lodges in the right bronchial tree due to a more vertical course and larger diameter lumen than the left (2). The reported incidence of aspiration ranges from 3.9% to 23.5% in published series (3-5).

There is no published diagnostic algorithm for a missing VP. As with all potential airway foreign bodies, Emergency Physicians often refer to Otolaryngologists for a flexible endoscopic assessment of the aerodigestive tract as the first line investigation. A dislodged VP can progress beyond the carina and may not be visible with a proximal endoscopic evaluation. Chest X-ray (CXR) and at times, even computed tomography (CT) of the chest may be falsely negative as treating teams may not be certain on the imaging hallmarks of a VP in the lower airways. Moreover, there is no official manufacturer data on the radiologic characteristics of these prostheses to guide a reporting Radiologist.

This radiologic study aims to characterize the distinct imaging characteristics of common VPs, and to make recommendations on optimal radiographic protocols to avoid the potentially fatal consequence of an aspirated prosthesis.

No ethics approval was required as this is an in vitro radiology study.

In this study, we simulated a dislodged VP within the tracheobronchial tree by placing each valve individually into an imaging phantom. An imaging phantom is an object constructed using materials designed to simulate the radiation absorption characteristics of human tissue, and therefore estimate radiation dose and evaluate the quality of imaging systems. In contrast to human or cadaveric models, phantoms provide more consistent and measurable data, and avoid subjecting a human to unnecessary radiation exposure (7). Phantoms of differing geometry and construction are used to accurately represent attenuation of different human tissues across various imaging modalities.

An American National Standards Institute sensitometry head and neck phantom, consisting of 3 mm of aluminium embedded within 4 × 1 inch sheets of acrylic, was used for plain radiography. This model was slightly modified by introducing a small air gap between the layers of Perspex in order to accommodate all VPs surrounded by air for one plain X-ray acquisition using standard adult CXR settings (radiation exposure of ~0.1 mSv).

A standard cylindrical polymethyl methacrylate 32cm dosimetry phantom with pre-drilled holes was used for CT imaging. Prostheses were individually placed into the phantom for each acquisition and a non-contrast fine slice CT was performed under low and standard dose conditions with lung (optimised for lung parenchyma) and soft tissue (optimised for mediastinal soft tissues) protocols. As iterative model reconstruction (IR) can further reduce image noise, this was further applied to assess its utility for our study question. Aligning these variables, a total of 8 images were available for interpretation for each VP.

The images were interpreted by an experienced Head and Neck Radiologist and verified by an Otolaryngologist. Primary outcomes were visibility of VP, description of VP appearance, measurement of CT attenuation in Hounsfield units (HU) and assessment of the optimal protocol for diagnostic purposes.

All prostheses were visible on the phantom (Figure 2).

Figure 2 Plain radiographic appearance of VP in a phantom.

All prostheses were difficult to see on low dose protocol images due to the small size of the VP, poor image contrast resolution and lower signal-to-noise ratio resulting in grainy images. Conversely, all VP were easily detected on standard dose settings. In particular, standard dose CT lung protocol with IR gave the best visualisation for identification purposes.

To measure the CT attenuation, two separate measurements were taken via a circular regional of interest from the same prosthesis, aiming for the most solid part of the prosthesis on the standard dose soft tissue and lung IR protocols. The measurement with the lowest standard deviation is expressed in Hounsfield Units (HU) in Table 1. Attenuation values are not given for low dose protocols as the inferior image quality was felt unable to provide sufficiently accurate and reproducible measures.

Product guides from Blom Singer® and Provox® state that all VPs are radiopaque. Beyond this statement, there is no further guidance on radiologic appearance, nor recommendations for specific imaging modalities and protocols. In some institutions, diagnostic radiology may not proceed beyond a plain CXR (8). Even when dedicated CT chest is performed, the reporting Radiologist may not detect the aspirated foreign body.

Our study has shown that all prostheses have HU measurements of at least >1,500, and usually >2,000 as long as the solid components of the prostheses are accurately measured at high magnification, without sampling error. It is important to note that HU measurements remain variable due to the small size of these devices and the effects of surrounding air. For that reason, standard deviations have been provided in our results.

Although we attempted to scan the prostheses using low dose protocols, the prostheses were either difficult or very difficult to see on these images due to their small size and poor image contrast resolution and signal to noise ratio.

In this in vitro study, all VPs were identified on plain and standard dose CT radiography. However, our experienced Head and Neck Radiologist author encountered some difficulty in detecting and characterising the valves, in particular on mediastinal soft tissue windows, and when low dose protocols were employed, even with an element of bias in knowing exactly what to look for. Radiologists will have limited clinical exposure to VPs and this may make radiological interpretation or identification of the prostheses challenging. Laryngectomy patients are also an older patient group with more co-morbidities. Anatomical alterations (e.g., emphysematous barrel chest) and other artefacts (e.g., pacemakers) can further obscure VP identification. For these reasons, an in vivo retrospective study on our institution’s known aspirated VP cases will be performed as a follow-up study to validate our in vitro findings.

At acute presentation, it is possible that many Emergency Physicians may never have seen a VP before. The cohort of community laryngectomy patients is small and, outside of Otolaryngology, clinical exposure to VPs in a surgically altered airway is rare.

Based on all these confounding factors, a plain chest radiograph is seldomly useful as a confirmatory diagnostic tool to exclude a VP in the lower airways. We therefore recommend that a non-contrast CT neck and chest covering the entire airway to exclude all sites where the dislodged prosthesis may be located, should be the next investigation. The results of this study suggest that a CT protocol with fine slices, an IR reconstruction optimised for lung windows (i.e., Fine Slice Lung IR) is the best protocol for identifying any prostheses. Review of fine slice images using mediastinal soft tissue windows (W: 350, L: 50), lung windows (W: 1,500, L: 600) and bone windows (W: 1,800, L: 400) is optimal. Coronal and sagittal maximum intensity projection (MIP) reconstructions may often be preferable to axial projections to identify and characterise the prostheses (Figures 3,4). Attenuation measurements may be compared to the reference ranges provided in Table 1. If the brand and model of voice prosthesis is known, this should be indicated on the request form by the treating team. In addition, providing a photo of what the VP may look like on the request form would assist the reporting radiologist to recognise it. Standardised reporting could include precise location within the tracheobronchial tree, relationship to surrounding soft tissue (e.g., embedded within an adjacent soft tissue wall). These data demonstrate that low dose CT protocols are suboptimal in the identification of a missing VP. 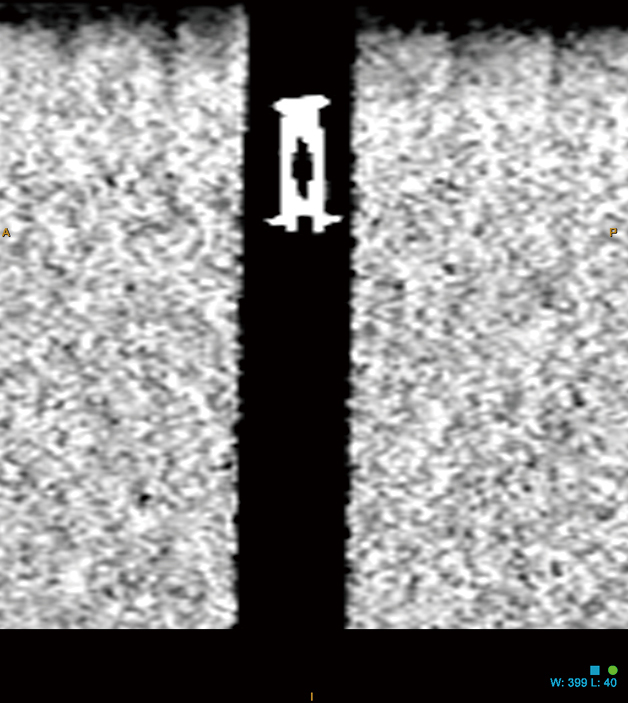 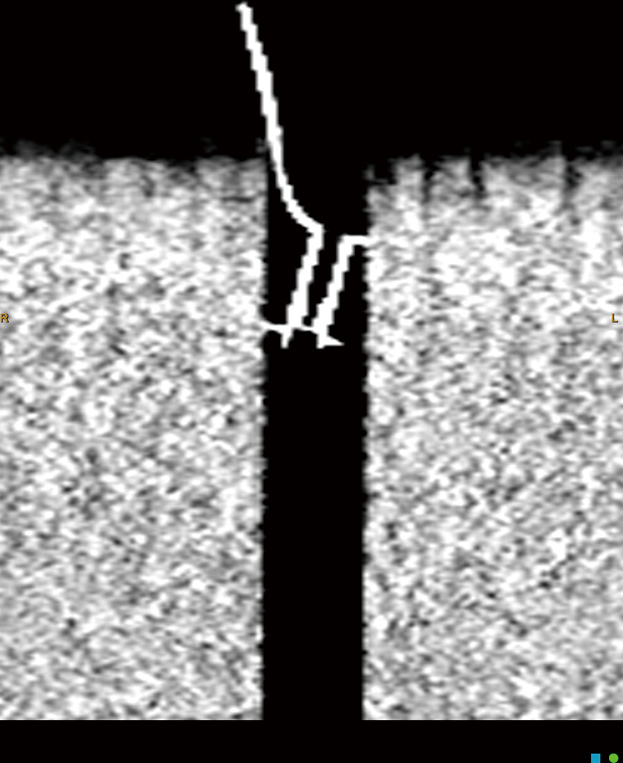 The missing VP generates much anxiety amongst patients and clinicians alike. Following a negative chest X-ray, this study would recommend performing a standard dose non-contrast CT neck and chest to cover the entire airway with IR reconstruction optimised for lung windows. Once the VP has been identified and localised, bronchoscopy for retrieval should be expedited.