Secondary post-tonsillectomy haemorrhage (sPTH) is a common post-operative complication in Otolaryngology with the National prospective tonsillectomy audit reporting a secondary haemorrhage rate ranging from 1.3% to 6.1% in 33921 patients undergoing tonsillectomy between 2003 and 2004 in England and Northern Ireland (1). The majority of available literature focuses on the factors associated with the risk of sPTH such as surgical technique, same day discharge or surgeon experience with only limited evidence-based literature on the management of sPTH (2) once a patient presents with sPTH. Conservative management of sPTH is usually attempted in the first instance. However, it is unclear how safe or effective conservative management is or whether it is associated with increased length of stay (LOS). A 7-year retrospective analysis by Arora et al attempted to produce guidelines for management of sPTH (3). Their protocol was to admit most patients with sPTH, with 61% of their patients requiring active medical intervention. Also, patients under 6 years of age with a normal oropharyngeal examination at the emergency department were less likely to need further intervention (3).

Flinders Medical Centre (FMC) is a tertiary academic South Australian (SA) public hospital that covers a large geographical area in the southern region of SA. There are several peripheral public and private hospitals in this geographical area performing tonsillectomy in both adults and paediatric patients. FMC provides 24-hour emergency Otolaryngology care service for patients living in this area. Hence, patients with sPTH presenting to FMC for admission and management in the study include patients operated at FMC as well as other surrounding hospitals.

The Stammberger classification for sPTH proposed a method of grading bleeding episodes according to the clinical examination findings of the oropharynx and the need to intervene (Table 1) following a 9-month prospective analysis of sPTH at a single centre (4). In April 2014, Flinders Medical Centre (FMC) applied the Stammberger classification of sPTH for all patients presenting to FMC as part of a protocol (Figure 1) and results were audited every four weeks. 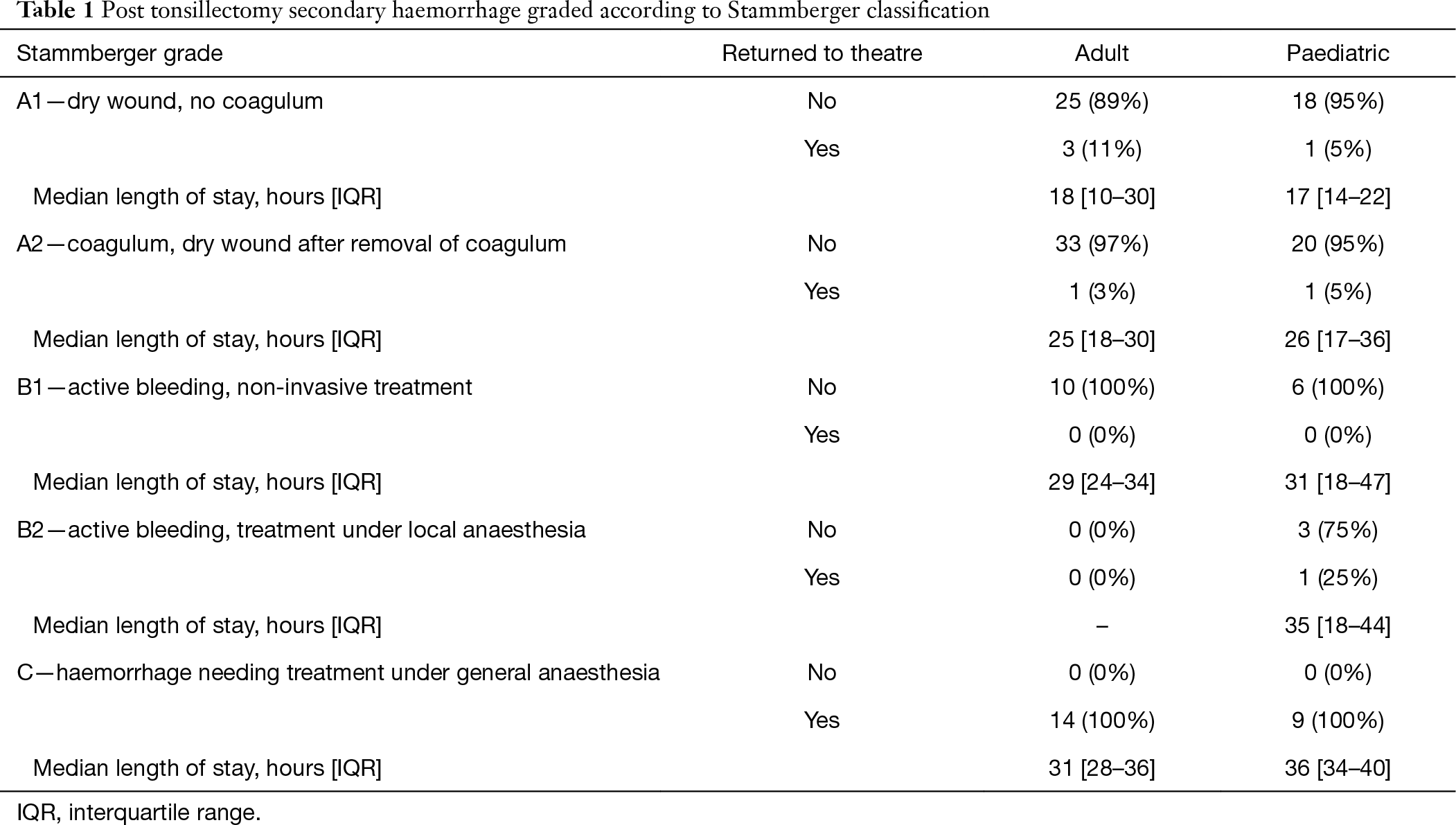 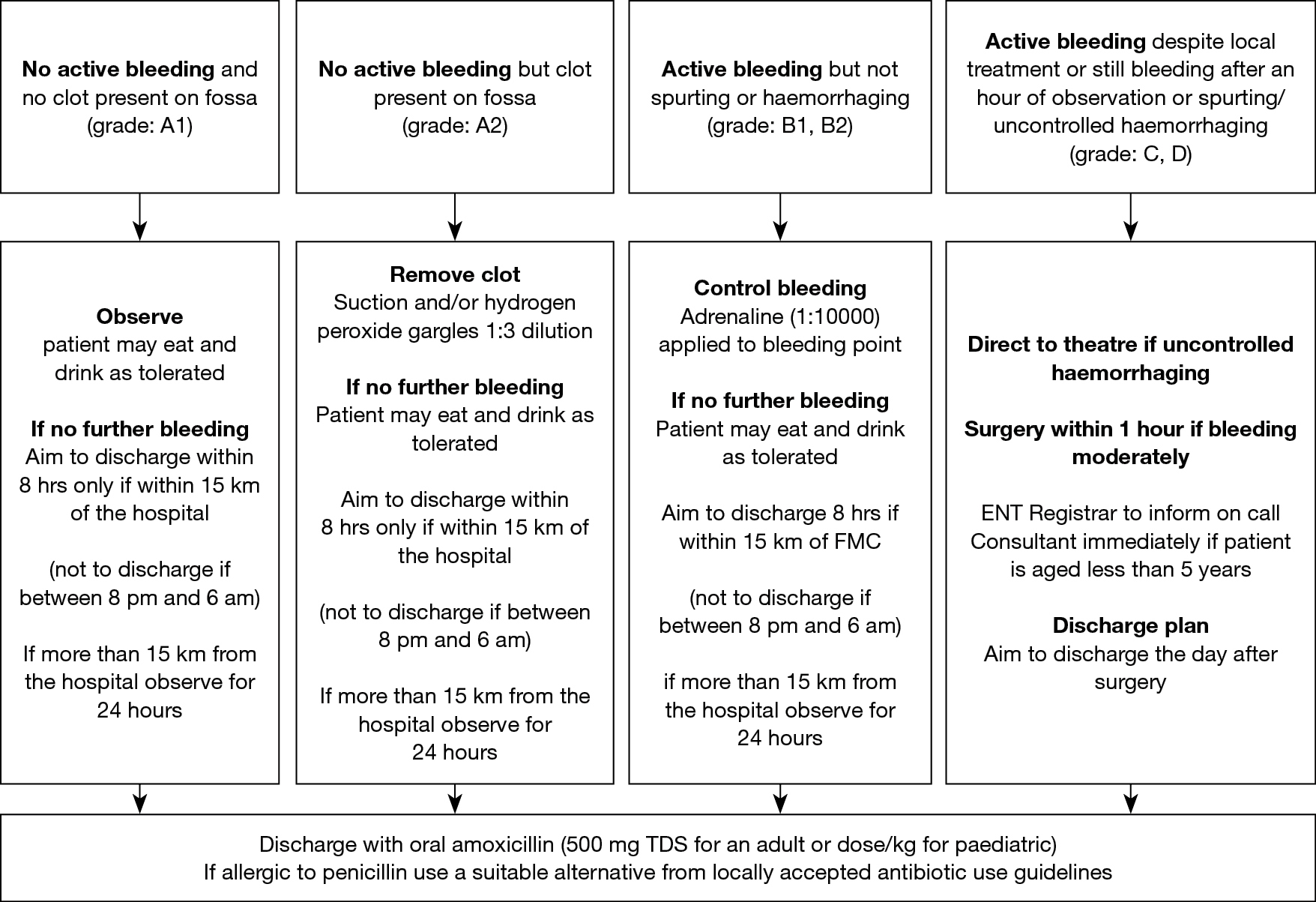 This study aims to report outcomes of patients presenting with sPTH to FMC, graded according to the Stammberger classification, with regards to re-bleeding during their admission (Figure 2). 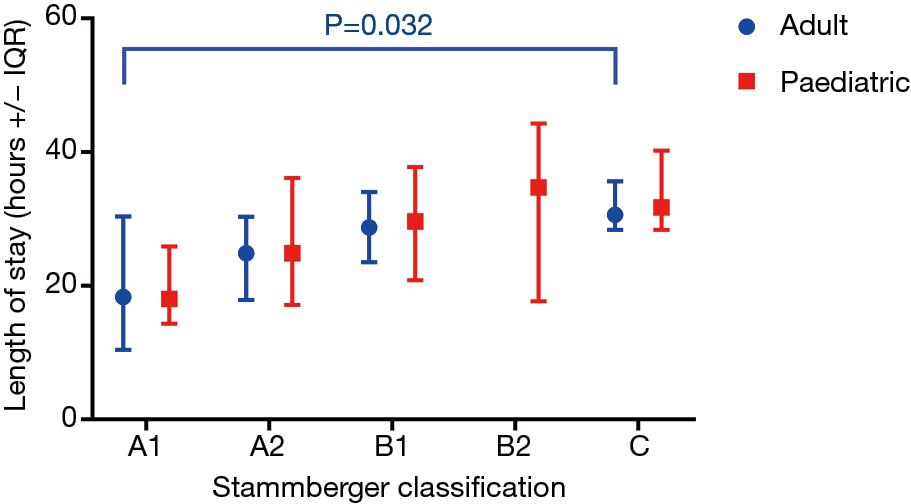 The Otolaryngology department at FMC has an electronic registry that identifies all patients with sPTH admitted to the hospital. A retrospective chart review of all sPTH admissions to FMC from April 2014 to May 2016 identified by the registry was conducted to analyse the management of sPTH. For the purposes of this study, sPTH was defined as a bleeding episode beyond midnight of the day of the tonsillectomy. Each admission to FMC was counted and analysed as a single episode of sPTH for the purposes of this study. A proportion of these patients had their tonsillectomy at a hospital other than FMC.

Non-parametric two tailed Mann-Whitney-U and Fisher’s Exact Chi-Squared testing was conducted for categorical comparisons and Kruskal-Wallis test for multivariate analysis. An alpha value of 0.05 was utilized to determine statistical significance. Central tendency reported as median values with interquartile range (IQR) due to small sample size and non-normal distribution of data.

Ethical approval was granted by The Southern Adelaide Clinical Human Research Ethics Committee. There was no conflict of interest declared by the authors of this paper. 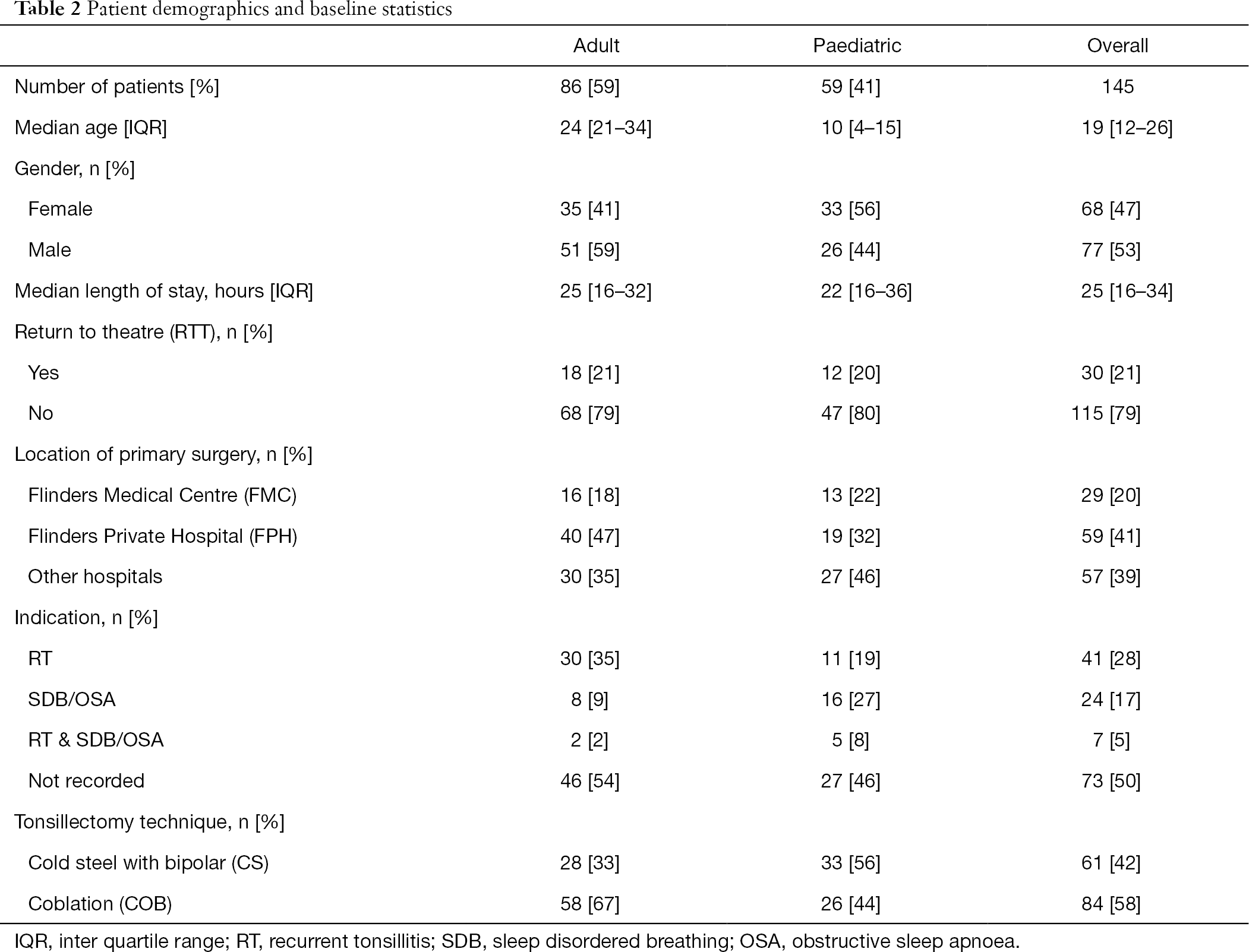 Overall, 79% of the patients were treated conservatively without the need to return the patient to theatre (RTT). Twelve children (20% of the paediatric group) returned to theatre and 18 adults (21% of the adult group) returned to theatre. Adult patients were marginally more likely to RTT compared to paediatric patients with RR =1.07 (CI 0.5–2.3), however, patient age was not a statistically significant factor for returning to theatre (P>0.05). The overall relative risk (RR) of returning to theatre is higher if the patient had a COB tonsillectomy [RR =1.45 (CI 0.7–2.9)]. This was observed for both paediatric patients with a RR =1.78 (CI 0.6–5.0) and for adult patients with a RR =1.25 (CI 0.5–3.1). However, these RR values were not statistically significant (P>0.05) between CS and COB groups.

In total, thirteen patients (8.9% of the original sPTH) from grade A1 to B2 were readmitted for subsequent sPTH (i.e., more than one admission with sPTH) with seven of these patients needing RTT (Table 4). Patients who had COB tonsillectomy were more likely to represent with sPTH and needed to RTT (Table 4). Median time to represent with a sPTH after their tonsillectomy was 42.34 hours (IQR, 14.7–74.4). None of the patients with sPTH who returned to theatre in the initial visit (Stammberger Classification C) subsequently represented to hospital with further haemorrhage. 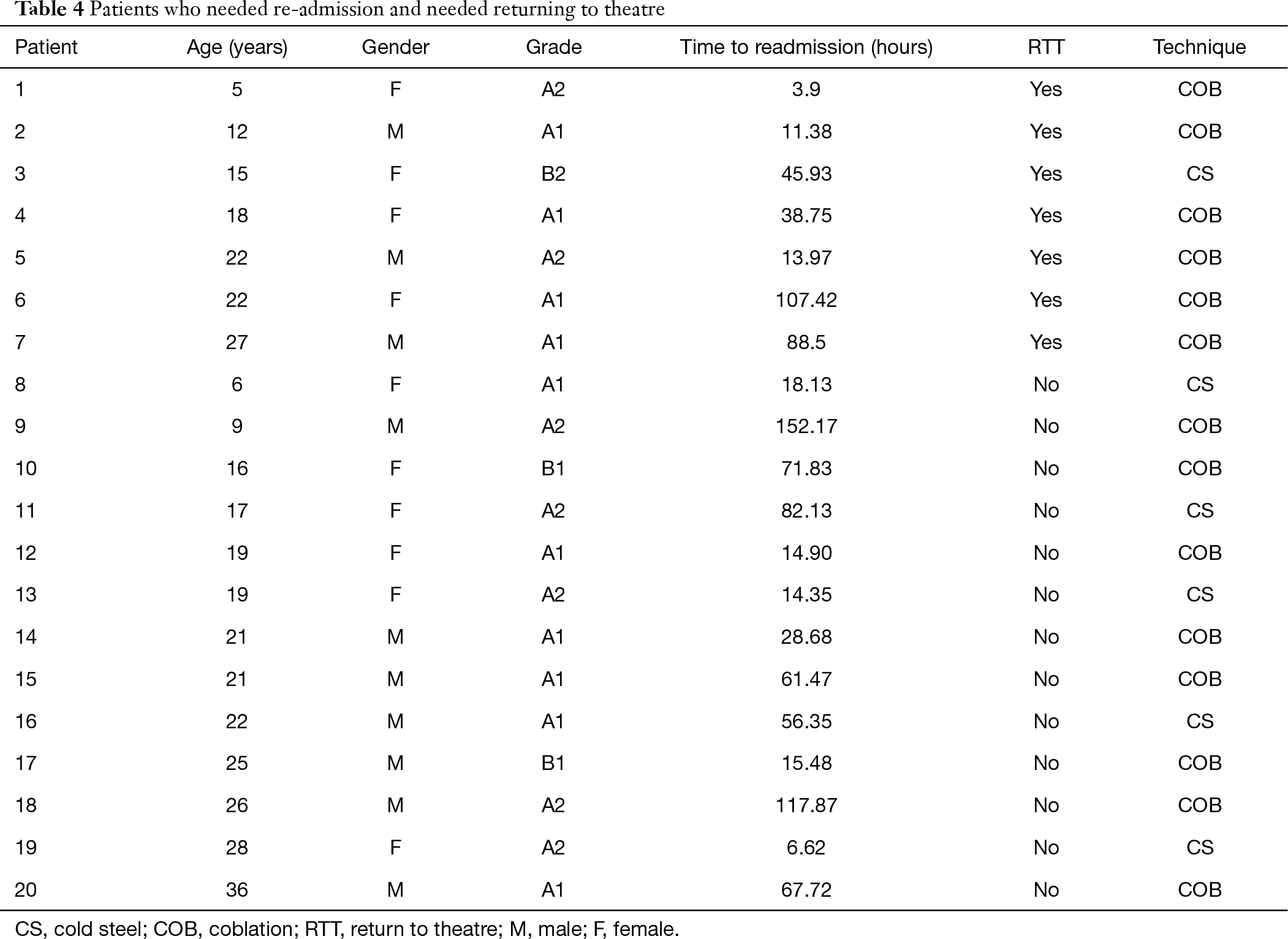 Overall, median LOS was 25 hours per admission with adult patients being admitted for 3 hours longer than the paediatric patients (P>0.05) (Table 2). LOS increased with severity of sPTH (Figure 2), however, the only statistically significant difference was between grade A1 and C for adult patients (13 hours longer in grade C, P=0.032). The median time of admission was 10:00 hours (IQR, 05:17–17:24) in the morning for adults and 15:00 hours (IQR, 05:19–20:47) in the afternoon for paediatric patients. 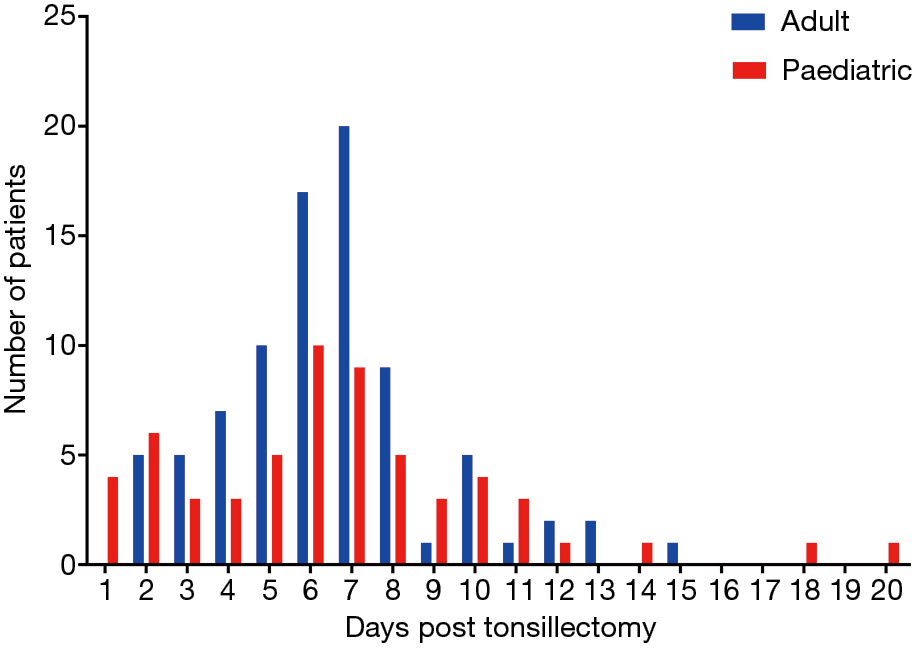 Duration between 1st episode of sPTH and 2nd sPTH

Tonsillectomy is a common procedure in otolaryngology with post tonsillectomy haemorrhage being one of the complications that is potentially life threatening (mortality rate 0.002%) (5). A thorough literature search using PubMed®, EMBASE® and Google® advanced search for grey literature indicated no published guidelines for management of sPTH. Standardised recording of events has the benefit of auditing the management of sPTH and for future research. The Stammberger classification (4) (Table 1) provides a way of grading sPTH on admission. Our observations in this study suggest that conservative management in the first instance is appropriate for patients presenting with their first sPTH episode as 79% of patients in our study did not require a return to theatre (RTT) during the first admission for sPTH. We found in our retrospective review that COB tonsillectomy or multiple presentations with sPTH in the same patient was associated with an increased chance of requiring a RTT.

Patients who required a RTT with their first sPTH did not present to FMC or other SA public hospitals with further bleeding episodes. SA health has an electronic patient registry that allows us to identify if patients were admitted at other public hospitals for sPTH. Most of the patients who RTT had a COB tonsillectomy but this result was not statistically significantly compared to the CS group due to the small number of patients in this study. Study of 2,541 tonsillectomies with a COB tonsillectomy technique, reported a 1.7% RTT rate for sPTH (6). They also reported an increased severity of bleeding in this group of patients with 33% of these patients requiring a blood transfusion. The decision to RTT is made at the time of patient presentation based on ongoing oropharyngeal bleeding, and significant decrease in haemoglobin levels. The experience at FMC supports the conservative management of most patients with their first sPTH who had COB tonsillectomy.

Managing patients with a self-reported sPTH with a normal oropharyngeal examination is a contentious issue in the literature, especially in the paediatric setting. The Graz study in 2013 recommends admitting all patients for at least 24 hours for monitoring because of the small risk of a severe second bleeding episode (7). Attner et al. in 2009 reported, only 1 out of 114 paediatric patients with self-reported sPTH, who had a normal oropharyngeal examination on presentation to the emergency department (ED), required further intervention. However, the authors recommend admission and monitoring for potential re-bleeding for all patients (8). A recent study of 407 sPTH presentation (92% paediatric), indicated that only 11% of patients with a normal oropharynx in the initial examination progressed to have a more severe bleeding episode requiring further intervention (9). At FMC (Table 4), only 2 out of 58 paediatric patients (3.4%) with self-reported sPTH (grade A1) required multiple admissions for sPTH and one of these patients needed to RTT for definitive management of sPTH in the subsequent visit. Our results also show that teenaged and adult patients were more likely to require a RTT if they presented on multiple occasions with sPTH. Yuen et al. reports 83% of these re-bleeding episodes occurred within 24 hours of the initial episode, consistent with previously reported data (10). In contrast, our results show 40% of re-bleeding episodes occurred within 24 hours of the initial admission. However, our results also show that re-bleeding in all grade A1 paediatric patients occurred within 24 hours of the initial admission. In contrast, only 13% of adults with an initial grade A1 re-bled within 24 hours of the initial admission. Hence, we propose that paediatric patients with sPTH should be admitted for 24 hours for observation and adult patients require shorter period of inpatient observation. There is no specific literature exploring the safety of specific distances from hospital for the outpatient management of sPTH. However, a recent study from Auckland, New Zealand reporting on the safety of day case tonsillectomy indicated their criteria to be: patients living within one hour from the hospital (11).

Majority of sPTH presentations to FMC were patients who had their tonsillectomy at other institutions in the surrounding geographical area (Table 2) with only 20% of the sPTH presentations having their original surgery at FMC. Indications for the tonsillectomy were poorly recorded in the patient notes. Attempt to contact external surgeons for further history was not always successful. Of the recorded indications, recurrent tonsillitis was the most common indication.

We have considered the distances patients travel to our hospital on presentation with sPTH and the age differences between patients. The overall time to readmit with a second sPTH episode ranged from 15 to 152 hours after their first sPTH with no statistically significant difference when compared to age, gender or tonsillectomy technique. At FMC the median LOS was 25 and 22 hours for adult and paediatric group respectively. The time of presentation appears to be a significant predictor of LOS due to logistical reasons. Median time at presentation was 12:19PM, which meant most patients were kept overnight for observation. Post tonsillectomy haemorrhage is a concern for patients, their families and surgeons. Our retrospective chart review contains only observational data but it does provide some evidence that the risk of requiring a RTT is low and conservative management of grade A and B bleeds is appropriate.

Our study limitations include the risks and biases inherent to retrospective chart reviews, incomplete data on the indications for tonsillectomy, relatively small sample size, and the heterogeneous population with tonsillectomies performed by multiple surgeons using multiple techniques from various institutions. We also acknowledge the variability in clinical assessment of sPTH in ED setting is based on experience of the medical officer and is likely to affect our dataset.

This retrospective chart review suggests that risk of ongoing bleeding after initial presentation is low for grade A and B sPTH patients and conservative management of sPTH is safe. Patients with multiple sPTH presentations are more likely to require a RTT on subsequent presentations with sPTH. There is no clear evidence on the best management of sPTH based on age, gender or tonsillectomy technique. A prospective controlled study would provide better evidence for the management strategies of sPTH.