Antibiotic prescribing practices in otolaryngology head and neck surgery in Australia and New Zealand: a survey of 137 specialists

Antibiotic resistance has become a global health issue with substantial health and economic burdens (1). Mortality related to antibiotic resistance exceeds 20,000 deaths per year in United States and European Union (1). Although the mortality rate in Australia has not been quantified, there is evidence to suggest that multi-drug resistant Staphylococcus aureus bacteraemia rates are significantly higher than European countries (2). In Australia, 21.9% of hospital antibiotic prescriptions were considered inappropriate either because they were not indicated (19.6%), duration was incorrect (17.7%), dose was incorrect (19.5%) or the chosen antimicrobial did not comply with guidelines (25.2%) (3). To counteract the developing problem of resistance, a national antibiotic resistance strategy has been developed with goals and objectives to mitigate the progression of antimicrobial resistance (1). This is based on the Global Action Plan on Antimicrobial resistance developed by the World Health Organisation (4).

Surgical prophylaxis is the main indication for prescribing antibiotics and interestingly over 40% of antibiotics prescribed are inappropriate. This has remained consistent for the past 3 years (3) and poses a significant problem especially given that close to 750,000 people had elective surgery in public hospitals across Australia in 2016–2017 (5). Specifically within Otolaryngology, Head and Neck Surgery, over 60,000 patients were admitted in public hospitals to receive an elective operation (5). The most common elective operations were tonsillectomy (with or without adenoidectomy), myringotomy and septoplasty (5).

There is currently limited evidence for the role of antibiotics in reducing post tonsillectomy morbidity (6). There is also little evidence to demonstrate the effectiveness of systemic antibiotics in septoplasty and myringotomy ± insertion of middle ear ventilation tubes (7). Australian guidelines recommend that in the absence of specific cardiac conditions, prophylaxis is not required for tonsillectomy, adenoidectomy, endoscopic sinus surgery or uncontaminated neck dissection (8). For other procedures in Otolaryngology, Head and Neck surgery, a single dose of a first generation cephalosporin (cephazolin) and a nitroimidazole (metronidazole) within 60 minutes before surgical incision is recommended for procedures where the incision is made through mucosal surfaces (oral, nasal, pharyngeal and oesophageal) or those involving insertion of a prosthetic material (8).

Evidence to measure the awareness and effectiveness of guidelines, particularly within Australia and New Zealand is sparse. Previous studies in Netherlands suggest that while approximately 70% of Otolaryngologists, Head and Neck Surgeons were aware of national and international, guidelines, adherence rates were only 45% (9). Although studies in the USA demonstrated a higher adherence rate to guidelines in paediatric tonsillectomy patients, there was still a significant non-adherence rate emphasising the need for increased awareness and implementation in the future (10).

This study aims to assess the antibiotic prescribing practices in Otolaryngology, Head and Neck surgery in Australia and New Zealand, comparing current practices to national guidelines and current evidence.

The survey contained four pages with the first page asking surgeons about antibiotic prescribing practices for tonsillectomy ± adenoidectomy, septoplasty ± turbinoplasty (with or without packing), functional endoscopic sinus surgery (with or without packing) and insertion of grommets. Options to select were no antibiotics, pre- or post-operative antibiotics. For insertion of grommets, participants were asked to select whether they prescribed oral antibiotics, ototopical or both.

Participants were then asked to indicate their preference of pre- or post-operative antibiotics.

The final section of the survey asked about country of practice (Australia, New Zealand), area of interest and number of years in practice (<5, 5–10, 10–20, >20). Three reminders were sent out at 4-week intervals through email in order to increase response rate.

A total of 472 emails were sent to members from ASOHNS and NZSOHNS. This consisted of 306 ASOHNS members and 166 NZSOHNS members.

After 12 weeks of the survey being active, a total of 137 responses were collected (29.0% response rate). Average survey completion time was 4 minutes and 47 seconds. 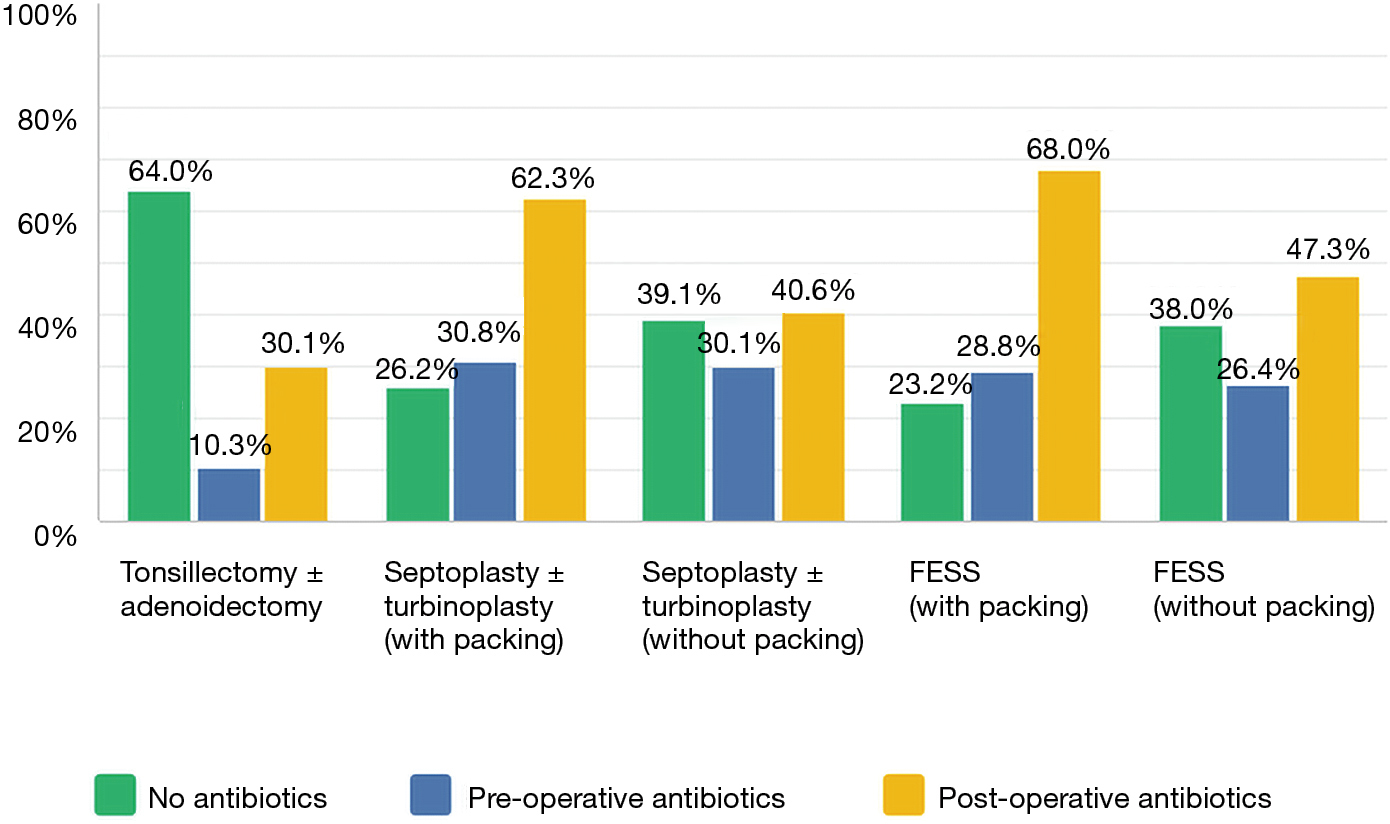 For insertion of middle ear ventilation tubes, most surgeons (51.8%, n=71) did not prescribe antibiotics while 48.9% (n=67) prescribed post-operative ototopical antibiotics only (Figure 2).

Majority of the surgeons indicated they would not give antibiotics for middle ear surgery (myringoplasty, tympanoplasty, OCR) (47.2%, n=50/106).

Our results indicate that while most surgeons did not prescribe any antibiotics for tonsillectomy ± adenoidectomy, a significant number prescribe post-operative antibiotics. Our findings were similar to previous studies in the USA where 30–40% of surgeons surveyed, prescribe antibiotics for these operations (10,12). Common reasons for prescribing antibiotics in this survey were prevention of infection, less post-operative pain and less post-operative bleeding. However, a Cochrane systematic review and meta-analysis by Dhiwakar et al. (6), found that antibiotics did not significantly reduce pain or need for analgesics. Furthermore, a meta-analysis did not show a significant reduction in delayed haemorrhage (6). However, there was a slight reduction in reducing number of patients with fever.

For septoplasty ± turbinoplasty and FESS (without packing) antibiotic prescribing was almost split between prescribing no antibiotics at all to prescribing post-operative antibiotics. In cases where packing was involved, preferences favored toward prescribing post-operative antibiotics. A similar survey of surgeons attending the American Rhinology Society demonstrated that 43% do not prescribe antibiotics for a routine FESS operation (13). However, survey of 442 otolaryngologists found that 70% of respondents prescribed antibiotics for endoscopic sinus surgery in the USA (12). Current Australian guidelines do not recommend use of antibiotics for routine uncomplicated FESS (8). Furthermore, a systematic review and meta-analysis of randomized controlled trials by Saleh et al. (14), found that antibiotic prophylaxis in FESS was associated with slightly lower but not significantly different rates of infection, symptoms scores and endoscopic scores.

A Cochrane systematic review and meta-analysis found that post-operative ototopical antibiotics were associated with a reduced incidence of post-operative otorrhea. However, the authors have recommended intervention only in patients with a high risk of ear discharge (15).

For otological procedures such as mastoidectomy and middle ear surgery (myringoplasty, tympanoplasty, OCR), our survey indicated that 33.3% and 47.2% did not prescribe antibiotics for these procedures respectively. This is similar to prescribing practices of colleagues in the USA (12). A Cochrane systematic review concluded that there is no evidence to support prophylactic use of antibiotics in clean otologic surgery (23). However, the role of antibiotics in cochlear implantation remains uncertain (24).

Inherent within the study is the response bias associated with survey design. Although most surgeons completed the entire survey, responses were low for some specialty procedures such as cochlear implantation where out of 120 responses, 91 did not routinely perform this procedure. This may reflect the small community of subspecialists who perform these procedures in Australia or New Zealand.

Overall, this study highlights a gap between current guidelines and prescribing practices in some areas of Otolaryngology Head and Neck Surgery. Although evidence in Australia and New Zealand on adherence to guidelines is sparse, previous studies in the Netherlands and USA have emphasised a need for increased awareness and implementation of guidelines in the future (9,10). Furthermore, the Australian Commission on Safety and Quality in Health Care have highlighted the need for increased collaboration with the Royal Australasian College of Surgeons to improve this gap (3).

Given the increased attention to and awareness of antibiotic resistance, further high level randomised controlled trials may help to determine the need and efficacy of antibiotics in various procedures within Otolaryngology, Head and Neck Surgery. For procedures where there is level 1a evidence regarding antibiotics use, e.g., tonsillectomy ± adenoidectomy, uncomplicated neck dissections and uncomplicated ear surgery, guidelines should reflect these findings with efforts to increase dissemination and awareness among specialists.

In conclusion, our data indicate a gap between current guidelines and antibiotic prescribing practices of Otolaryngologists, Head and Neck Surgeons in Australia and New Zealand. In addition to efforts focussing on awareness and dissemination of current guidelines, high-level studies are needed to establish robust evidence-based guidelines to aid in the decision-making process for surgeons.