Head and neck cancer is the 6th most common malignancy world-wide, affecting 600,000 patients annually (1). Despite advances in treatment modality, dysphagia is still a common post-treatment morbidity affecting greater than 50% of cancer survivors (2). Gastrostomy tubes are important adjuncts in maintaining nutrition in patients undergoing treatment for their head and neck cancer and sometimes are a permanent necessity for those suffering from severe long-term dysphagia after treatment of their cancer. There is currently no consensus regarding the role of gastrostomy tube insertions for head and neck cancer patients (3).

Treatment options for head and neck cancer currently include surgery, radiotherapy and chemotherapy alone or in combination. However, despite a general trend towards organ-preservation chemo-radiotherapy protocols, dysphagia is still common as it is recognised tissue preservation does not always equal function preservation (4). Dysphagia following non-surgical therapy is usually secondary to mucositis in the acute period and pharyngeal submucosal and muscular fibrosis in the long-term (5-7). These treatments associated side effects lead to hospital readmissions, malnutrition and disruption or delay in treatment.

A retrospective chart review was performed on all patients with head and neck cancer treated with non-surgical modality at Flinders Medical Centre and Royal Adelaide Hospital from January 1st 2010 to December 31st 2015 with at least 12 months follow-up data. Inclusion criteria included patients greater than 18 years of age with a histological diagnosis of mucosal squamous cell carcinoma (SCC) in any head and neck subsite treated with primary radiotherapy or chemoradiotherapy aimed at curative intent. Patients managed with palliative intent were excluded.

Prior to treatment, patients were examined clinically and with a panendoscopy under general anaesthesia. Radiological examination consisted of computed tomography (CT) neck and chest and positron emission tomography (PET) scans where indicated. Tumour staging was based on the TNM classification of International Union Against Cancer (UICC) 7th edition (9). All cases were discussed in a multidisciplinary meeting where a decision was made regarding treatment modality. Decision on gastrostomy tube insertion was based on institution preference and pre-defined criteria (Table 1). Prophylactic gastrostomy insertion was defined by the multidisciplinary team (MDT) decision to insert the tube prior to treatment, whereas reactive tube insertion was defined as gastrostomies inserted after initiation of treatment. 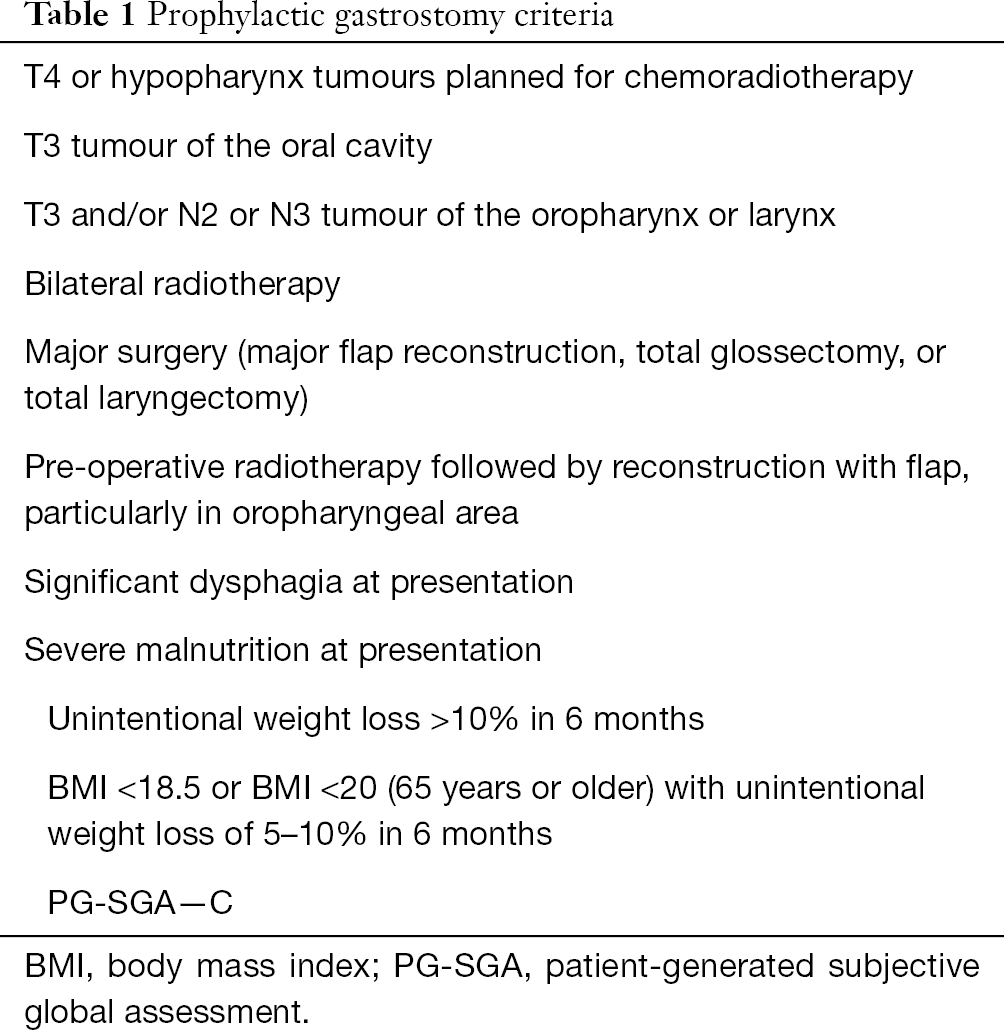 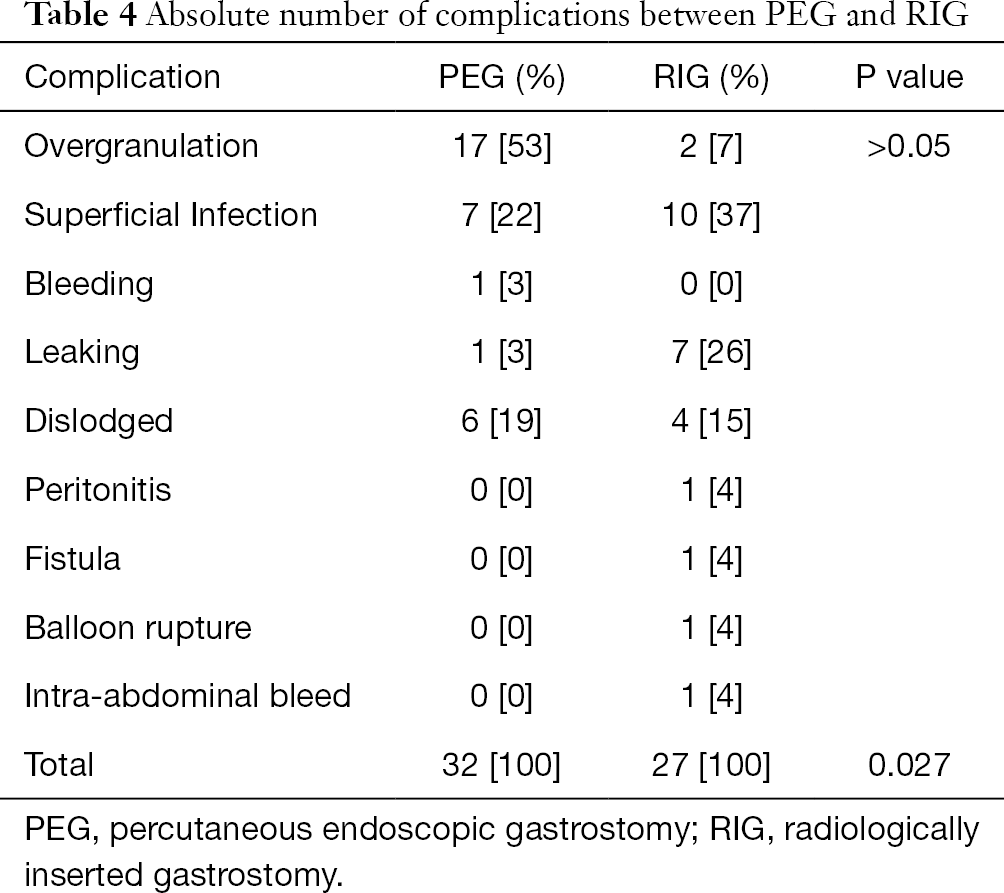 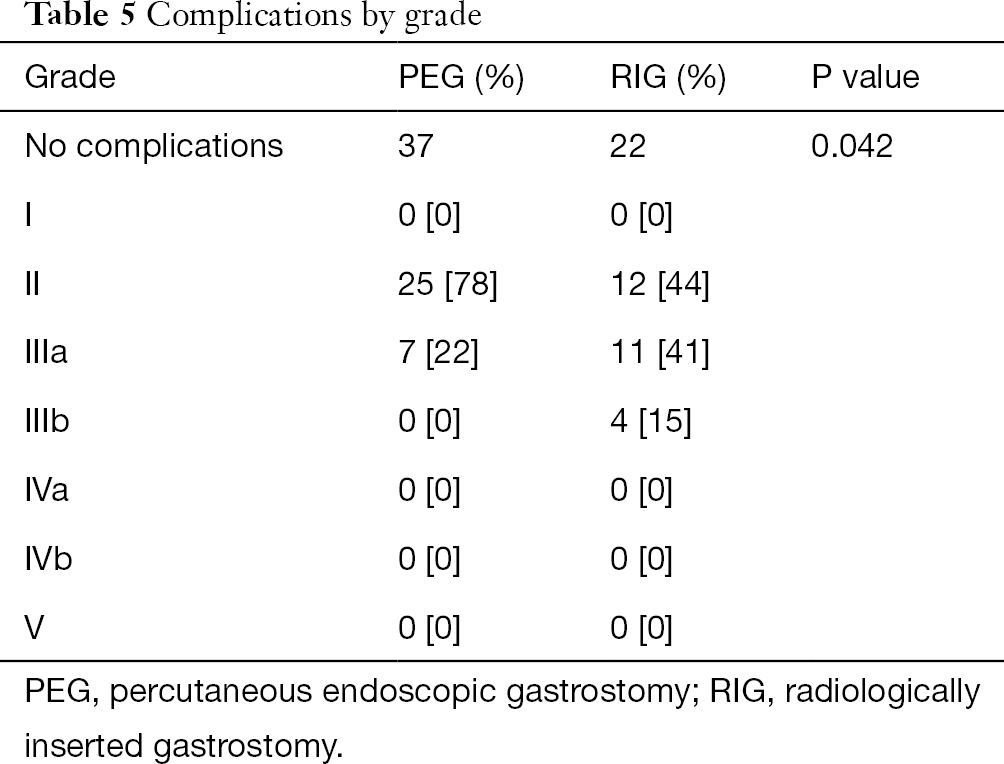 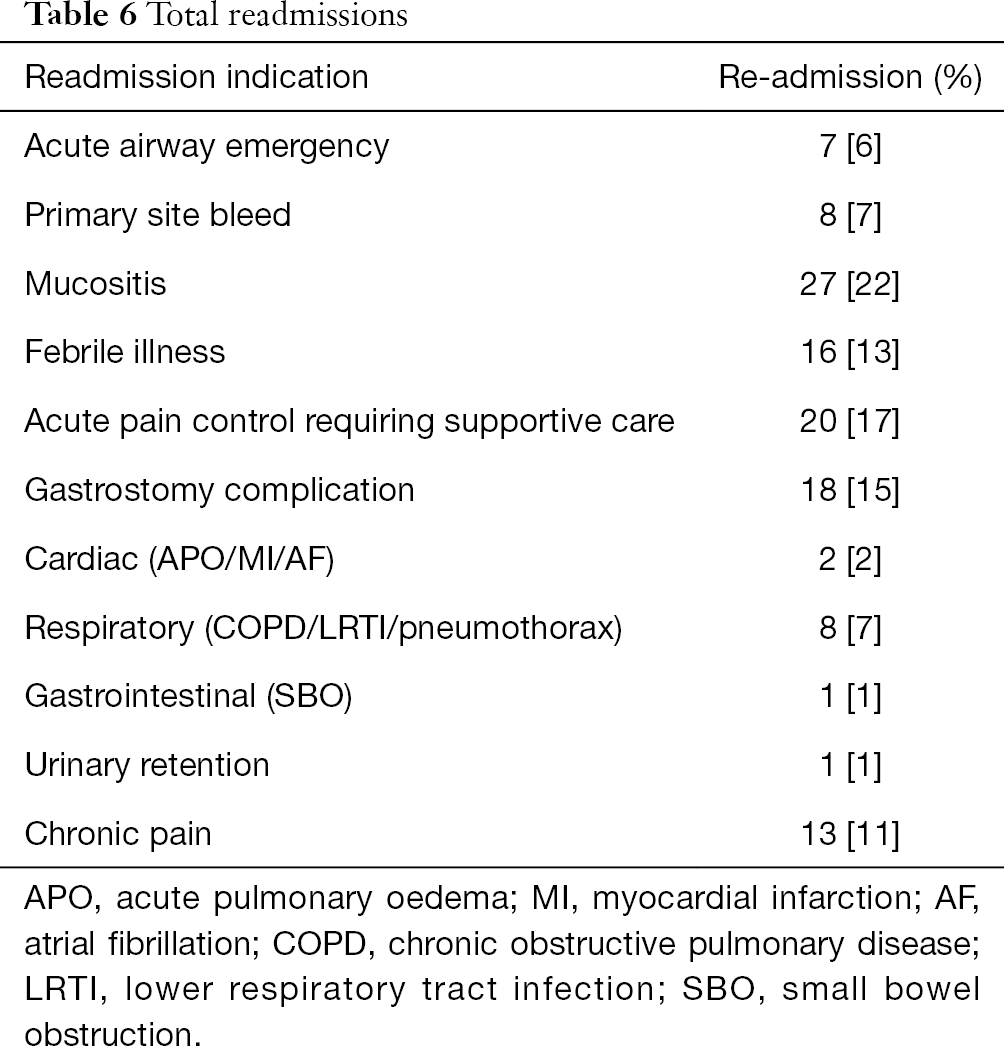 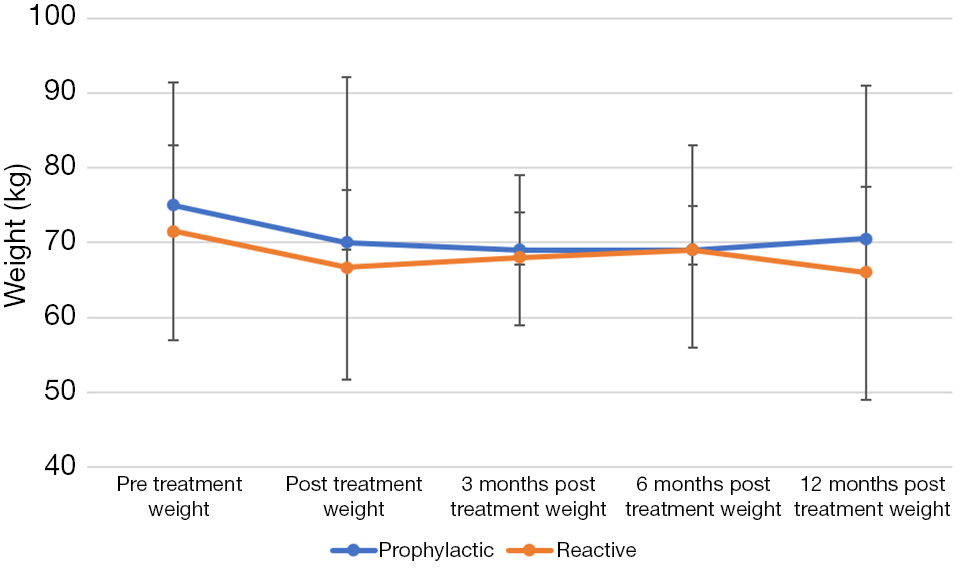 This multi-institutional retrospective chart review examines the use of gastrostomy tubes in 103 head and neck cancer patients treated with primary non-surgical therapy in two South Australian tertiary head and neck centres. The use of gastrostomy tubes in the maintenance of nutrition in head and neck cancer patients during treatment is a controversial topic. Current literature demonstrates conflicting results with different institutions adopting varying protocols and treatment regimes (3,11,12). The decision for prophylactic insertion of a gastrostomy tube was made at our multi-disciplinary meetings, based on patient and treatment factors, before the patient began treatment of their cancer. Despite these issues, there was found to be no delay in treatment.

This study demonstrated overall complication rates for PEG and RIG insertions were 16% and 26% respectively. RIG insertions were found to have a greater number of grade III complications compared to the PEG group. Grade II complications occurred in 24% of patients, requiring pharmacological intervention. Grade III complications occurred in 18% of patients requiring surgical management. Brown et al. demonstrated minor and major complication rates of 40% and 10% respectively in Australian head and neck cancer patients (13). It was difficult to compare these results due to differing classifications of complications and 93% of Brown’s patients having PEG insertions. This study had comparable results to the systematic review conducted by Grant et al. demonstrating PEG and RIG complication rates of 19% and 24% respectively (8). Although no mortalities were present in this series, the current literature demonstrates fatality rates following PEG and RIG insertions of 2.2% and 1.8% respectively (8). Our results demonstrate lower rates of overall and serious complications with PEG’s. The choice of employing a PEG or RIG is dependent on patient factors, such as oral access (mouth opening, obstructive aerodigestive tract mass), previous abdominal surgeries, co-morbidities, institution and operator expertise. These results bring into question the use of nasogastric tube feeding as a safer alternative for short-term nutrition. Systematic reviews by Wang et al. and Paleri et al. demonstrated equivalent weight maintenance between the PEG’s and nasogastric feeding (14,15). Additionally, PEG’s were associated with increased incidence of pain and delay in return to oral diet compared to nasogastric tubes. Alternatively, patients with nasogastric feeds experienced altered body image with increased inconvenience compared to their PEG counterparts.

Readmissions to hospital were found to be due to acute pain management requiring supportive care secondary to mucositis. Mucositis affects up to 60% of patients receiving radiation therapy to the head and neck region, with a significant rise in incidence to greater than 90% when utilized on conjunction with chemotherapy (5). The significant pain associated with mucositis commonly leads to severe dehydration and malnutrition associated with hospital readmissions. Capuano et al. found reduced rates of hospital readmissions with stable maintenance of weight in patients with prophylactic gastrostomy insertions (16). Patients with prophylactic gastrostomies readmitted with dehydration could be due to non-compliance with gastrostomy use. Patient education and motivation on gastrostomy use must be considered prior to insertion; however, this was outside the scope of this study.

Maintenance of weight and nutrition is an important aspect in the treatment of patients with head and neck cancer. Patients treated in both prophylactic and reactive gastrostomy groups were found to lose a median weight of 5 kg during treatment, which stabilised by 12 months following treatment. These findings are similar to the study by Kramer et al. demonstrating no significant difference in rates of weight loss between patients with prophylactic or reactive gastrostomy tubes (11). Additionally, our study identified that pre-treatment weight was strongly correlated with post-treatment weight at all time points, demonstrating the importance of pre-treatment nutritional status on weight maintenance. These findings demonstrate the importance of optimising head and neck patient nutritional status prior to treatment. Capuano et al. and Paccagnella et al. demonstrated early nutritional intervention to be associated with improved weight maintenance, decreased infections, early mortality, survival, treatment tolerance and decreased readmissions (16,17). Isenring et al. demonstrated early nutritional supplementation resulted in improvement with global quality of life and physical function with reduction in treatment-associated morbidity (18).

Prophylactic gastrostomy tubes were found to be in situ in the patient for a shorter period compared to reactive gastrostomy tubes, being 174 and 249 days respectively. Brown et al. demonstrated median time to tube removal in prophylactic gastrostomy insertions ranging from 100 to 110 days (13). Additionally, they found 87% of patients were completely dependent on enteric feeds for their full nutritional needs at the completion of treatment. This rate dropped to 66% and 29% at one- and three-months post-treatment. The extend of gastrostomy usage was outside the scope of this study. The prolonged gastrostomy dependence present in the reactive group may demonstrate progressive swallowing impairment secondary to treatment with poor nutritional status. This group of patients may have had impaired swallowing prior to treatment predisposing them to increased incidence of failing oral feeding during treatment compared to patients completing chemoradiotherapy without gastrostomy feeds, this was outside the scope of this study. The increased gastrostomy dependence in these patients is likely secondary to the effects of chemoradiotherapy such as late oesophageal strictures, muscular fibrosis and disuse atrophy of pharyngeal muscles (12,19,20). Additionally, prolonged gastrostomy dependency has been associated with adverse effects on quality of life (15). The shorter gastrostomy dependency within the prophylactic group could be due to that group of patients having minor swallowing difficulties. There is evidence to support maintenance of swallowing function during and after treatment to prevent the deterioration of swallowing function (21,22). The speech pathology and dietetic departments in our institutions routinely see the patients during treatment to aid in swallowing therapy, gastrostomy education and monitoring nutritional status. Patients were encouraged to continue with oral intake and swallowing exercises during treatment despite having a gastrostomy in situ.

The retrospective nature of this study leads to a source of several potential biases. Firstly, there was a difference in population size between the PEG and RIG groups. There was heterogeneity with malignancies of differing stages and head and neck subsites in this study. Advanced staged tumours are associated with higher levels of dysphagia, and thus would be expected to have a longer duration of gastrostomy dependency. However, despite these potential biases, there was no significant difference in weight changes between patients with different stages. It was difficult to draw conclusions regarding weight changes and gastrostomy dependency between prophylactic and reactive gastrostomy patients as the reactive gastrostomy group did not include all head and neck cancer patients treated without gastrostomy tube insertions.

Gastrostomy use in head and neck cancer is an important and controversial topic among clinicians. The results from our study indicate optimisation of nutritional status prior to treatment is useful for patient’s weight maintenance and minimising weight loss post treatment. Protocol-based approach may be advantageous for patients with advanced malignancies due to greater potential for long-term dysphagia, however, patients with lower stage malignancy may not require gastrostomy tube insertion. The risks need to be stratified as these patients may benefit from a “watch and wait” approach with gradual escalation to short-term nasogastric feeds prior to gastrostomy tube insertion as nasogastric feeds have also been demonstrated to be a safe alternative for short-term dysphagia (15). Institution expertise, patient factors and preference must be taken into consideration prior to tube insertion.