Oral cavity cancer is the tenth most common cancer in the developed world (1), and treatment outcomes have shown limited improvement in survival compared to other head and neck cancers (2,3). Contributing to poor survival is the relatively advanced stage at diagnosis (4) and limitations of imaging in pre-surgical staging (5), leading to more aggressive surgical and adjuvant management. Elective neck dissection in clinically node-negative pT1 and pT2 oral cavity cancer demonstrates occult metastatic disease in 13–33% (pT1) and 37–50% (pT2) of cases (6). There is significant morbidity associated with neck dissection and adjuvant radiotherapy, highlighting a need for predictive markers to improve patient selection.

Underpinning cancer development and metastasis is genomic instability, which is a function of outside stresses and the cellular DNA damage response cascade. Double-strand DNA breaks are the most deleterious genomic lesion and are repaired by two competing repair pathways; homologous recombination (HR) and non-homologous end joining (NHEJ). RNF8 is a ubiquitin-E3 ligase (7) that acts in a number of roles in the DNA damage response and repair system (8,9), is preferentially expressed following IR exposure (10), and is a rate-limiting component among the ubiquitin-E3 ligase analogues (11). RNF8-mediated ubiquitin-chain polymerisation of histones H2A and H2Ax promote initiation of the both HR and NHEJ upstream mediators (9), however there is also evidence it can prevent interference between the two pathways (12). In vitro knockdown of RNF8 induces PARP1-inhibitor sensitivity, chemosensitivity and radiosensitivity (12,13). In this study, our aim is to investigate the role of RNF8 protein expression in overall survival and association with established adverse clinical markers.

Ethics and governance approval was obtained from Metro South Governance at the Princess Alexandra Hospital (HREC/13/QPAH/2). From the Fifty-five [55] formalin-fixed paraffin-embedded tumours were sampled and assembled in a tissue microarray with a Beecher MTA-1 Manual Arrayer. Antigen retrieval was effected by autoclave at 105 degrees celcius in EDTA buffer for 15 minutes, blocked with TBS. Sections were incubated for 1 hour with primary antibody (Sigma HPA050731) 1:100 dilution at room temperature. Sections were counterstained with haematoxylin and assessed by the study pathologist. A four-point grading scale (No uptake, mild uptake, moderate uptake, significant uptake) was constructed using reference normal oral mucosa as a control. Tumours were scored according to percentage expression and intensity. Clinical data was obtained from chart review and pathological database search. Comorbidity was graded with the ACE-27 scoring tool (14). Data analysis is performed with the assistance of IBM SPSS (ver 21) statistical analysis software. Kaplan-Meier survival graphs are constructed for each, and statistical significance is tested using the Mantel-Cox log rank. Interactions between biomarkers and clinical cofactors were manually tested using Pearson’s R-test or Spearman correlation.

Staining intensity showed reasonable variability with the RNF8 antibody, with 16 of 53 valid tumours (30.2%) graded ‘positive’ on stain intensity. Localisation in positive samples was homogenous, with a granular nuclear stain uptake.

While overall survival was not significantly affected in RNF8-positive disease in this study, stratification by received radiotherapy treatment showed an inverse survival relationship (Figures 1,2). One patient in this analysis was censored, as they did not receive radiotherapy however still had residual disease. 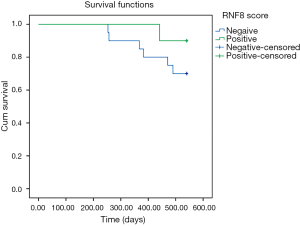 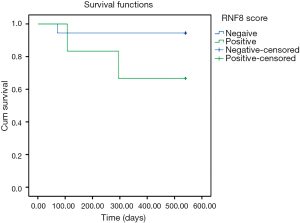 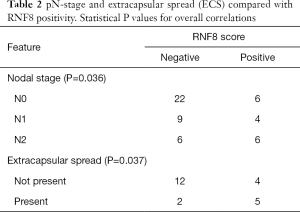 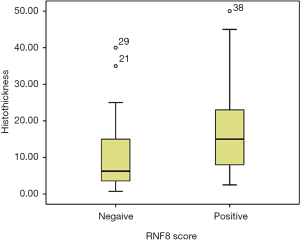 The present study demonstrates an association between RNF8 expression and tumour thickness, nodal status and nodal ECS. Prediction of overall survival is linked to radiotherapy treatment, with RNF8-positive disease demonstrating increased radiosensitivity. Interestingly, positivity was also associated with the presence of adverse features. In particular, strong association was found with nodal ECS, one of the most sensitive predictors for aggressive disease (15,16). While these findings appear to be in contrast to in vitro cell knockdown studies which demonstrate increased IR and chemosensitivity in RNF8-deficient disease (12,13), staining was not calibrated to indicate deficiency. RNF8 is a rate-limiting component of the E3-ubiquitin ligase system that aids coordination of NHEJ and HR DNA repair (11). RNF8 also generates Lys48-linked ubiquitin chains which are associated with histone degradation (17). High in vivo tumour expression of RNF8 may represent higher levels of underlying genomic instability, and propensity to develop the associated adverse features of ECS and nodal spread.

Overall survival data suggests an association with radiosensitivity, however interpretation of the predictive effect of RNF8 expression on the effectiveness of radiotherapy in the present retrospective study is not possible due to the inability to exclude patients who were offered radiotherapy but declined, or were decided to be unfit for radiotherapy. One such patient was identified and excluded, however as chart documentation was not standardised this could not be properly assessed. As a subgroup analysis, neither survival graph reaches prognostic significance in isolation. Given the strong role of RNF8 in both radioresistance mechanisms and dsDNA repair pathways, this is a promising link for larger trials to investigate.

We have demonstrated a strong association between RNF8 expression and several critical clinical markers for disease prognosis; tumour thickness, ECS and histological N-stage, which are only available following surgical excision. Importantly, as RNF8 expression may be assessed on a pre-operative biopsy specimen, its association with ECS and nodal spread may allow these features to be predicted pre-operatively. This early identification of adverse pathological staging has application in early chemotherapy & radiotherapy planning, patient treatment discussion and multidisciplinary team decision-making.

Further prospective studies are required to elucidate the effectiveness and predictive power of RNF8 as a treatment biomarker. The association between high intrinsic RNF8 expression and aggressive tumour features suggests underlying genomic instability, and in the context of previous work demonstrating chemoradiosensitivity in RNF8-deficient cells offers an attractive adjuvant drug target.