Otic neuralgia (ON), defined as persistent otalgia in the absence of clinically evident ear pathology, is a diagnostic challenge and is often attributed to either direct or referred pain from other structures (1-3). The middle ear has a complex neural supply from several cranial and cervical nerve branches, with multiple potential sources of referred ear pain (1,3,4).

One major contributor to sensory supply is the tympanic branch of the glossopharyngeal nerve (tympanic nerve or Jacobson’s nerve), which supplies the tympanic plexus and middle ear mucosa (4). Division of Jacobson’s nerve, or tympanic neurectomy, has been used as a successful treatment of ON. The procedure was first described by Golding-Wood in 1962 (5) and successfully alleviated three of four cases. Descriptions of tympanic neurectomy for neuralgia are uncommon in the literature. In 1990, Cook et al. (6) published a case report of bilateral lancinating asynchronous otalgia where the pain was relieved following a tympanotomy with 2 mm of the tympanic nerve excised. In 2016 the procedure was revisited by Roberts et al. (7) who performed a microscopic tympanic neurectomy on twelve patients with an improvement in intractable otalgia.

The challenge with microscopic approaches has been visualizing all branches of the nerve to ensure success of the tympanic neurectomy (8). In addition to this, anatomical variations have been described where the nerve may enter the middle ear anteromedially in the septum between the internal jugular and internal carotid prior to traversing the middle ear anteriorly (8). Furthermore, the caroticotympanic nerves contribute to the tympanic plexus and arrive anteriorly from the carotid prominence of the protympanum.

The aim of this work is to describe an endoscopic tympanic neurectomy, a technique which allows direct visualization of all tympanic nerve branches, especially in the presence of anatomical variants anteriorly. The primary outcome measure was relief of pain.

Jacobson’s nerve is a bundle of predominantly secretomotor and sensory fibres (4). The nerve leaves the inferior ganglion above the jugular foramen, traverses the inferior tympanic canaliculus within the jugulo-carotid spine to enter the middle ear either through or just anterior to the finiculus (4,9,10). The first branches of the tympanic nerve typically occur anterior to the round window.

The tympanic nerve is the main contributing nerve to the tympanic plexus, which lies on the promontory. The plexus is usually submucosal, however, in up to 20% of ears, the plexus lies within the bone of the promontory (4,9,10). The tympanic nerve provides sensation to the protympanum and Eustachian tube as well delivering parasympathetic fibers that arise in the inferior salivary nucleus to the same region.

After contributing to the tympanic plexus, Jacobson’s nerve travels superiorly and exits the middle ear space, medial to the tensor tympani tendon. The nerve then becomes the lesser superficial petrosal nerve carrying the visceral motor parasympathetic fibers to the parotid gland via the otic ganglion. The caroticotympanic nerves and arteries exit through channels in the bone overlying the carotid canal on the medial aspect of the protympanum.

This case series was approved by the Macquarie University Hospital and the Nova Scotia Health Authority Ethics Committees.

Patients were selected for this procedure based on a history of neuropathic unilateral otalgia. The pain was typically described as paroxysmal, lancinating and centered in and around the external auditory canal (6). A clinical history with an ear, nose, throat, head and neck examination was performed on all patients to rule out alternative causes of otalgia. Nerve root entry compression was ruled out with both CT scans of the petrous temporal bones and MRI scan including the lower cranial nerves. The patient’s co-morbidities, precipitating events for the pain and duration of the pain were recorded (Table 1). Analgesia in the form of pregabalin and/or amitriptyline was titrated to maximal effect with tolerable side effects prior to consideration of surgery. The patient was appropriately consented regarding the procedure and potential for complications. 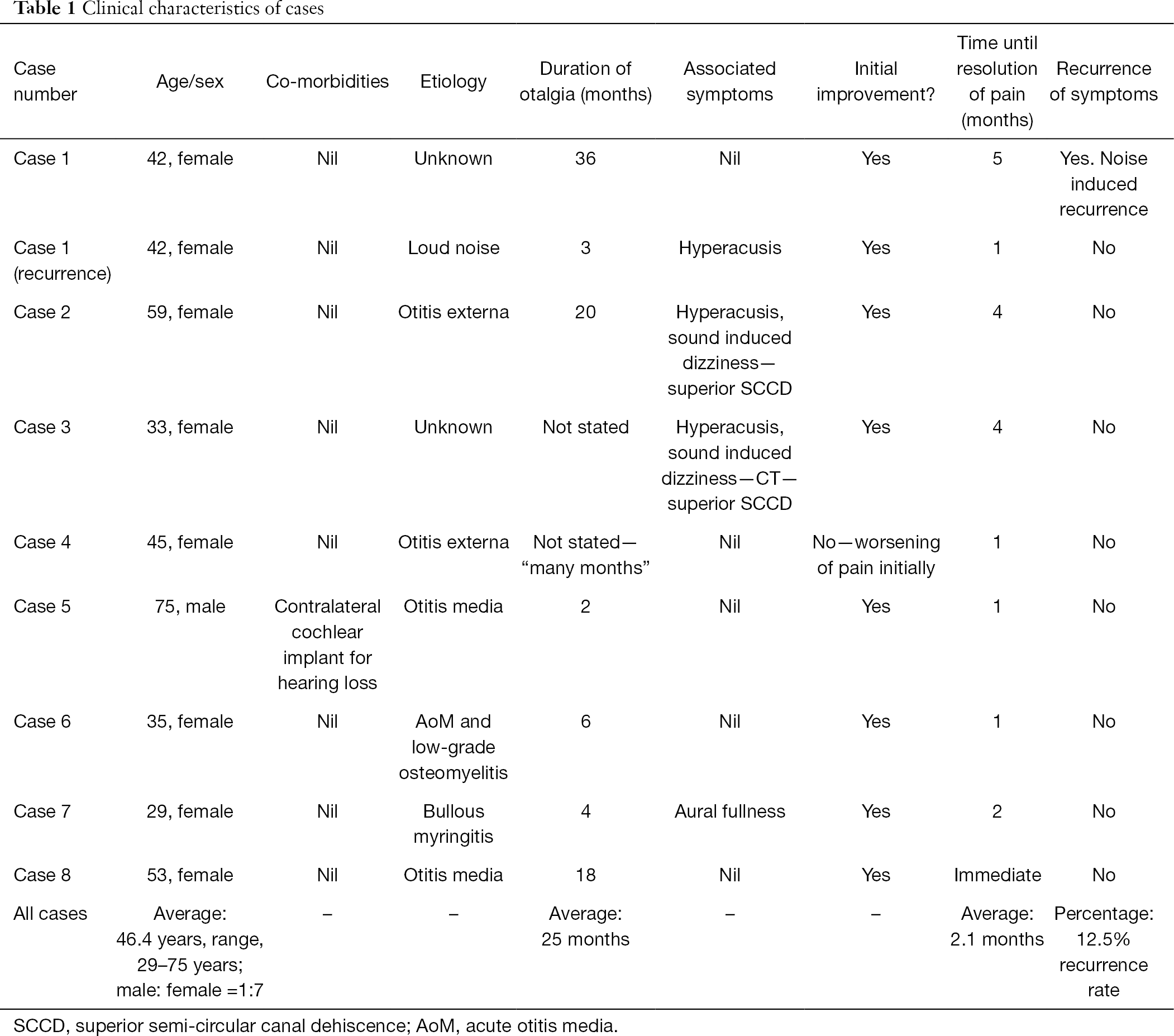 The primary outcome of interest was pain, and this was reported by the patient as either “no change in pain”, “an improvement in pain” or “a resolution in pain”. Patients were seen two weeks following the procedure and again at one and 6 months following the surgery.

Under general anesthetic and after local anesthetic infiltration of the area, a tympanomeatal flap was raised from 6 to 12 o’clock. The tympanic membrane was left attached to the malleus. The chorda tympani nerve was identified and preserved in all cases. If needed, an angled endoscope was then used to identify the finiculus and inferior tympanic nerve within the bone or adjacent to the landmark. The nerve was followed through its middle ear course ending under the cochleariform process (see Figure 1). This segment of nerve along with any caroticotympanic branches were removed. The nerves were avulsed from their bony groove with a sharp instrument, and then divided (see Figures 2,3). Residual nerves fibers within the bone were removed with a diamond burr at low revolutions (800 rpm). The tympanomeatal flap was replaced and appropriate ear canal packing used. 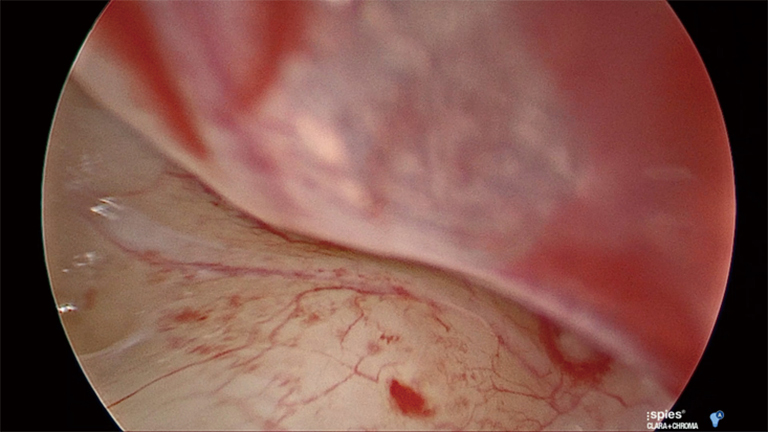 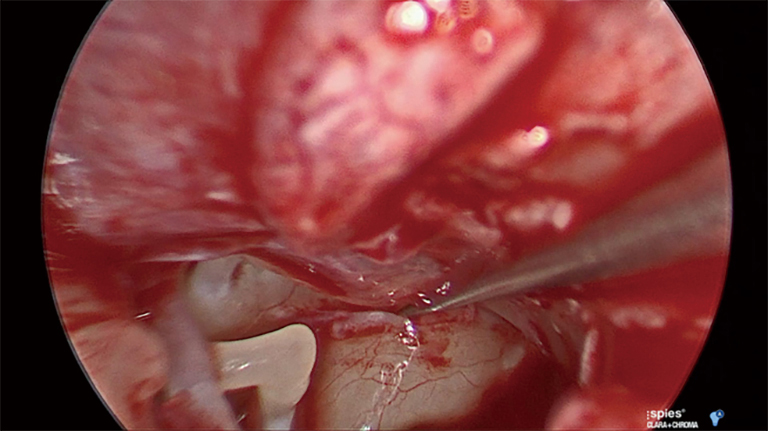 Figure 2 The tympanic nerve along with any caroticotympanic branches are divided using a Rosen needle and the nerve fibres are then avulsed from their bony groove and removed using microscopic grasping forceps. 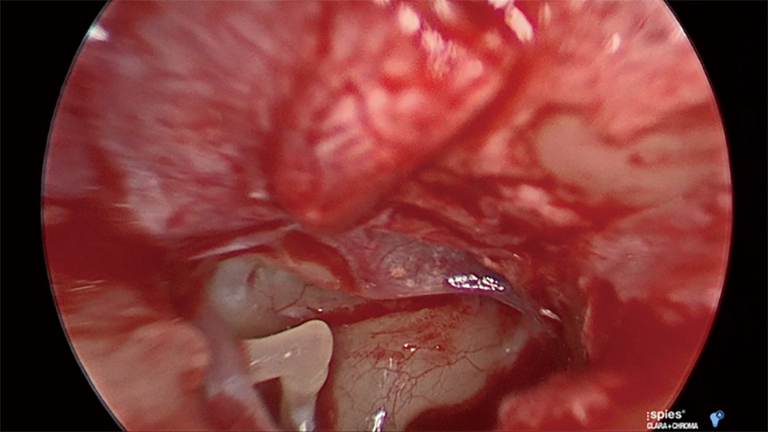 Figure 3 This is an image of the groove in which the tympanic nerve resides, immediately after the nerve has been removed. The wider field of view allowed by an endoscopic approach permits a more extensive removal of the nerve when compared to the microscopic approach.

From May 2014 to December 2016 there were a total of eight cases of endoscopic tympanic neurectomies performed for ON. The mean age at presentation was 46.4 years (range, 29–75 years), there were 7 females and 1 male. The individual patient clinical characteristics are shown in Table 1.

Five patients had pain which followed an infectious process involving the middle or external ear. The remainder did not have clear causes or predating symptoms. Four patients had concurrent pathology which required an additional procedure on the affected ear at the time of surgery. None of the patients exhibited other pain syndromes as a part of their presentation to us. Two patients had concurrent complaints of hyperacusis and autophony whilst one patient had an imbalance associated with an ipsilateral hypersensitive cervical visually evoked myogenic potential response. These complaints were addressed with cartilage plugging of the round window and division of the incudostapedial joint at the time of the surgery. Another patient who had superior semicircular canal dehiscence underwent a concurrent repair with a mini middle fossa craniotomy.

All eight patients were pain free by 9 months follow up. There was an improvement of pain seen on the first post-operative day and first follow up visit in seven patients, however, one complained of worsened otalgia in the immediate post-operative period which later resolved completely.

One of the cases had immediate relief of symptoms initially until experiencing loud noise exposure at a concert with a recurrence of otalgia at 9 months. A second endoscopic tympanic neurectomy was performed and soft tissue was found where the tympanic nerve had previously been divided. It was postulated that this was regrowth of the nerve and this material was surgically removed with sharp dissection. The symptoms were again completely resolved following this second operation and the patient remains pain free at 6 months follow up.

The innervation of the middle ear is multifaceted and poorly understood. The tympanic nerve and tympanic plexus is thought to be predominantly responsible for somatic sensation within the middle ear (11). ON can be due to numerous causes (1-3,12) and alternative causes of pain must be excluded by clinical history and examination, and radiological imaging. A trial of neuropathic analgesics should be implemented and response to therapy should be monitored as well as potential side effects. Although large trials are lacking, it has been shown that a tympanic neurectomy can offer relief of otalgia in select patients (5-7). If the diagnosis of ON is questionable, intratympanic 1% lignocaine may be used to confirm the diagnosis. Neurogenic pain may be temporarily relieved with this procedure. This diagnostic technique is however, highly emetogenic with a risk of temporary facial nerve paresis.

Roberts et al. (7) described the tympanic neurectomy for intractable otalgia in 13 ears, however, they only used the endoscope in four cases whom required revision surgery following the regrowth of the tympanic nerve after primary surgery. In these cases, an argon laser was used to ablate the tympanic plexus and bone cement was used to occlude the inferior tympanic canaliculus and superior opening on the nerve tract in order to prevent regrowth. In the presented series, one patient required revision surgery for a recurrence of ON following an initial endoscopic approach to the tympanic neurectomy; the lower recurrence rate in this series may be accounted for by the initial endoscopic approach, which allows the surgeon to better visualize and remove the tympanic nerve.

In the presented series, the patients’ symptoms were like that of post-herpetic neuralgia (PHN); over half of the patients developed their otalgia following an infectious process and the pain was described as lancinating, paroxysmal, severe and unbearable. Given the retrospective multi-institutional nature of this series, the most reproducible method of assessing our outcome was a categorized patient reported change in the level of pain; a qualitative scale would have allowed for more rigorous statistical testing and should be considered in the future validation of tympanic neurectomy.

The mechanism of this post-infectious ON could be comparable to PHN. Levin et al. demonstrated that there can be a post-traumatic irritation of the tympanic nerve and so it stands to reason that infectious processes can also result in tympanic nerve irritation (13). Axonal damage has been shown to result in a neurogenic hypersensitivity, spontaneous neuronal activity and aberrant re-innervation, all of which contribute to pain in PHN (14). In other areas, a regional neurectomy has been shown to reduce the incidence of neuropathic pain. Examples of this treatment include ilioinguinal neurectomy following chronic neuropathic pain after herniorrhaphy (15-17) as well as trigeminal neurectomy for trigeminal neuralgia (18). It is proposed that likely an infectious or traumatic insult to the tympanic nerve during middle ear infections can result in the same cascade of neuronal events seen in PHN, with the subsequent division of the nerve removing this perception of otalgia.

The complications of the tympanic neurectomy have not be described in the literature, however, this procedure can cause a reduction in salivary flow rates (19,20) which in theory increases the risk of sialolithiasis. The other possible complications include unresolved otalgia, conductive or sensorineural hearing loss, tympanic membrane perforation, disequilibrium and tinnitus.

Tympanic neurectomy offers a therapeutic option for patients suffering from treatment-resistant ON once alternative causes have been excluded. The endoscope allows visualization of the complete tympanic course of Jacobson’s nerve, the tympanic plexus and the caroticotympanic nerve allowing for a more precise and complete neurectomy.