The surgical removal of orbital contents poses a significant challenge to the patient faced with a life-threatening peri-orbital or orbital malignancy. Orbital exenteration (OE), first described by Bartisch in 1583 (1), is the surgical removal of the orbit and its surrounding adnexa and is reserved for patients who have disease not amenable to eye preserving surgical intervention (2-4). It is important the surgeon performing OE understands the impact on survival, and the cosmetic and functional challenges faced by the OE patient. Survival following OE has been investigated across a range of settings, however, varied survival statistics have been reported. Histopathological data has also been investigated in several cohorts, with diversity of tumour types and variation in tumour or pathological characteristics noted (5-14). A previous Australian cohort has demonstrated a predominance for SCC (14). Similar cohorts have been described in studies from other regions where chronic sun exposure is common (7,9). In comparison, studies from other geographical regions with lower chronic sun exposure or lower exposure to ultraviolet light more commonly have cohorts in which basal cell carcinoma (BCC) forms the dominant tumour type (6,11,12). Despite varying dominant tumour types, the clear commonality between cohorts is a degree of heterogeneity in histopathology, with cohorts reporting up to 14 different tumour types identified (6,7,9-14). As such, survival outcomes can be difficult to predict in the context of small cohorts and tumour diversity. Furthermore, Patients face significant morbidity as a consequence of OE, with risk of adverse functional and cosmetic outcomes which can impact quality of life (15). OE is a significant life event for the patient and can result in poorer health-related and vision-related quality of life (15-18). Thus, it becomes important that patients are able to make an informed decision regarding OE and are able to develop reasonable expectations regarding the likely impact surgery will have on survival and quality of life. We present demographic, tumour and survival data of patients who have undergone OE at our centre between 2005 and 2015 and discuss the results in relation to the current literature.

Prior to commencing the study, ethics approval was granted by the Human Research and Ethics Committee of the local health district. A retrospective chart review of paper based and electronic medical records, imaging and histopathology reports, and existing head and neck databases was performed. Patients were included in the study if they had undergone OE between 1st of January 2005 and 31st of December 2015, were alive at time of exenteration (i.e., exenteration was not performed for organ donation) and were aged older than 16 years at time of exenteration. Patients were excluded if they did not meet the criteria above. Data collected included epidemiological data, disease specific and histopathological data, treatment modalities, surgical data (including number of procedures performed and surgical margins), recurrence status and vitality status at the study end points.

A total of 35 orbits of 35 patients were included for statistical analysis (Table 1). There were 23 male and 12 female patients (male:female of 1.9:1). The median age at exenteration was 69.4 years old (range 32.1 to 91.4 years). Patients who underwent OE for squamous cell carcinoma (SCC) were older (median age 84.6 years) compared to those who underwent OE for BCC (68.7 years) or other tumours (59.1 years). Ten of 35 patients gave a history of smoking (28.6%), and all but two patients were independent in activities of daily living prior to exenteration. Exenteration was performed for recurrent tumours in 12 patients (28.6%): 7 in the SCC group, 3 in the BCC group and 2 in the other tumour types group (1 neuroblastoma and 1 melanoma). All patients except for two (one who died days after surgery, and the other was a palliative procedure in the setting of metastatic melanoma) received adjuvant radiotherapy. Additionally, 9 patients (25.7%) required secondary surgery following exenteration, with indications ranging from treatment of recurrence, to staged reconstruction and flap revision, to debridement and management of post-operative wound infection. 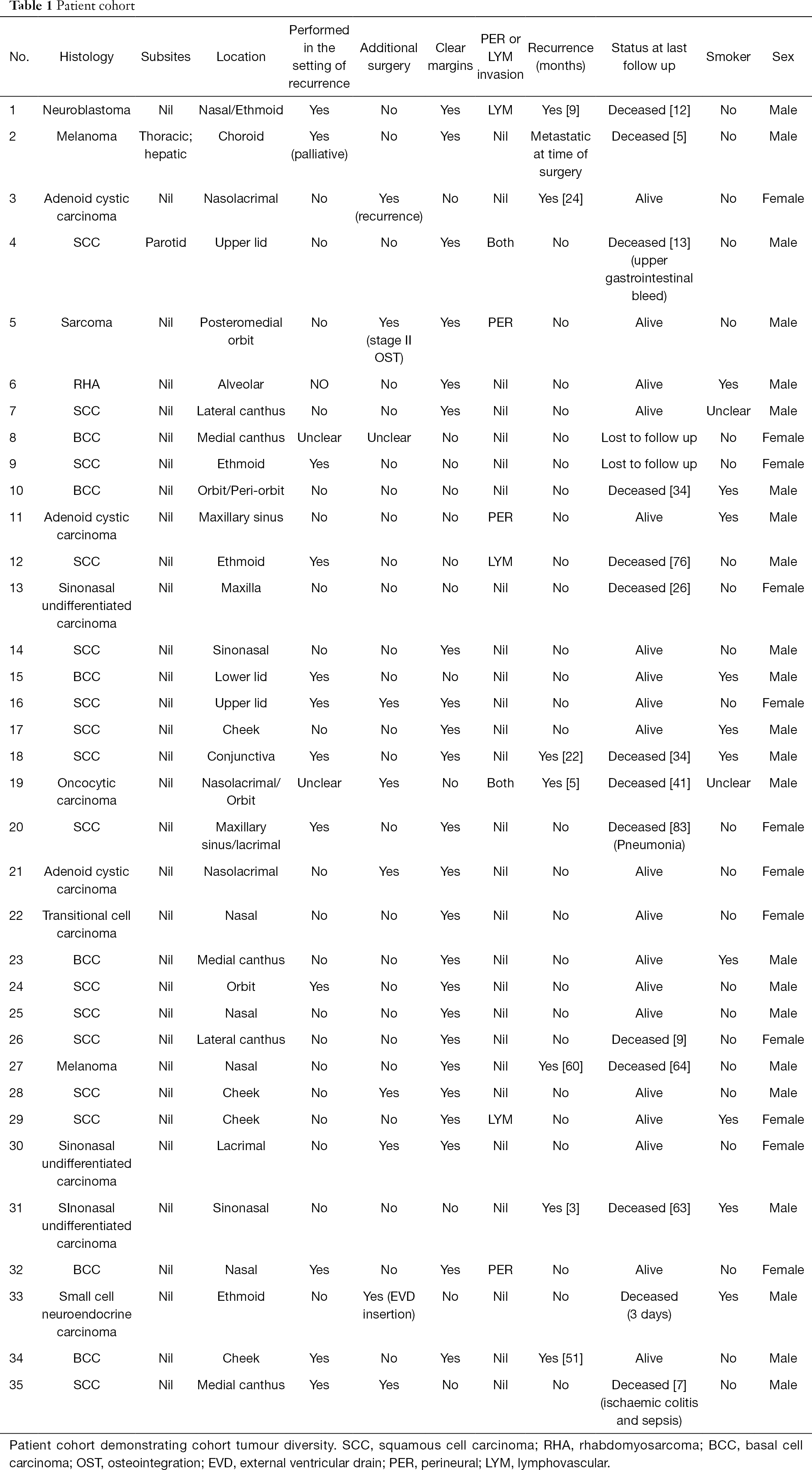 Twelve patients (34.3%) had positive surgical margins and all but one (who died shortly after surgery) underwent adjuvant radiotherapy or chemo-radiotherapy. Three of these patients went on to develop recurrence (25%), three died from causes not related to their disease (one patient developed an intracranial haemorrhage shortly after surgery, one died 7 months after surgery from ischaemic colitis and sepsis, the third died from ischaemic heart disease), and four remained disease free during the study period. DFS of patients with involved surgical margins was 44.96 months (25.25 to 64.66 months), and OS was 54.67 months (36.05 to 73.29 months).

Seven patients had a confirmed recurrence of their disease. Of these, only one had involved surgical margins, all received radiotherapy or chemo-radiotherapy, and three patients had undergone OE in the setting of recurrence following prior surgical intervention of their tumour. Histopathology of the tumours that recurred included one patient with SCC, one with adenoid cystic carcinoma, one patient with neuroblastoma, one melanoma, one BCC and one undifferentiated carcinoma. Kaplan-Meier estimates of DFS revealed mean DFS of the cohort was 64.57 months (95% CI: 48.45 to 80.71 months) (Figure 1). Mean DFS of the tumour subgroups was 68.56 months (95% CI: 39.39 to 97.74 months) for the SCC group, 97.50 months (95% CI: 85.17 to 109.83 months) in the BCC group, and 42.14 months (95% CI: 24.47 to 59.80 months) in the other tumour group (Figure 2). There was no statistically significant difference between tumour subgroups (P=0.099). 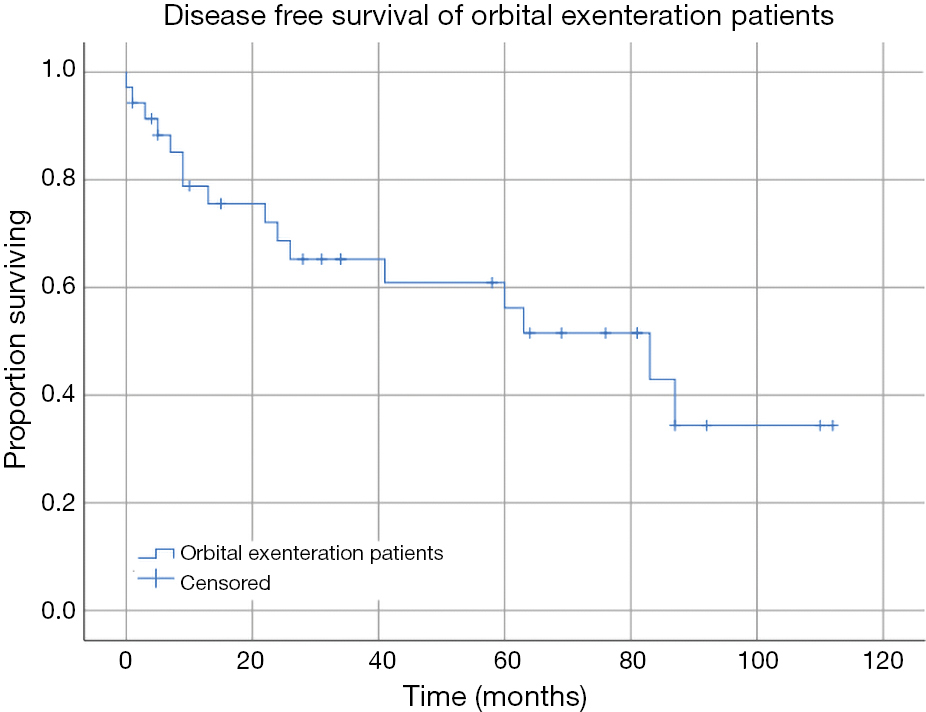 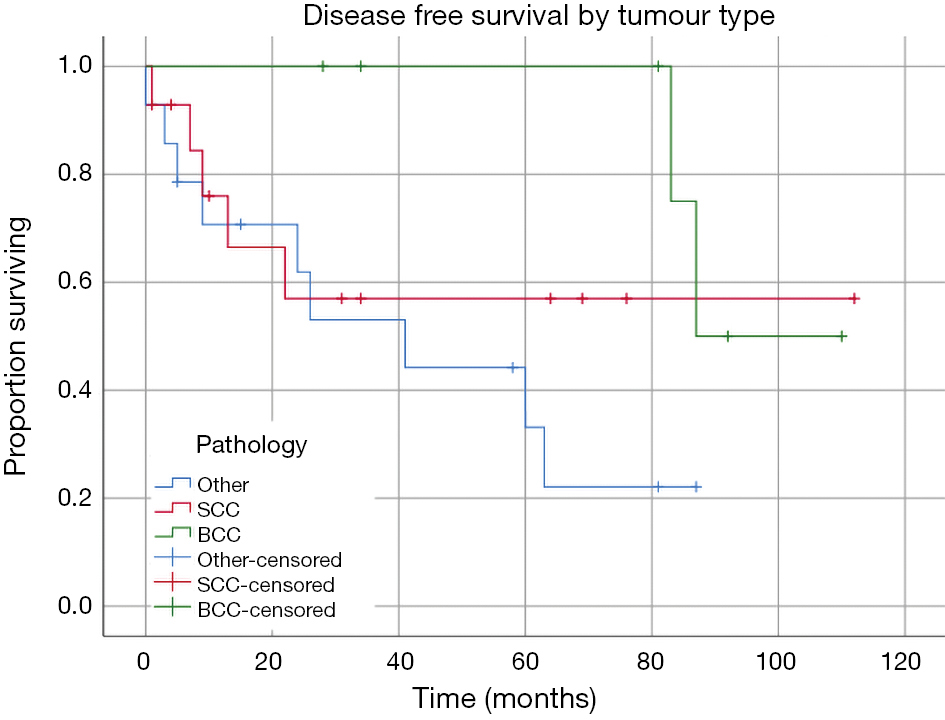 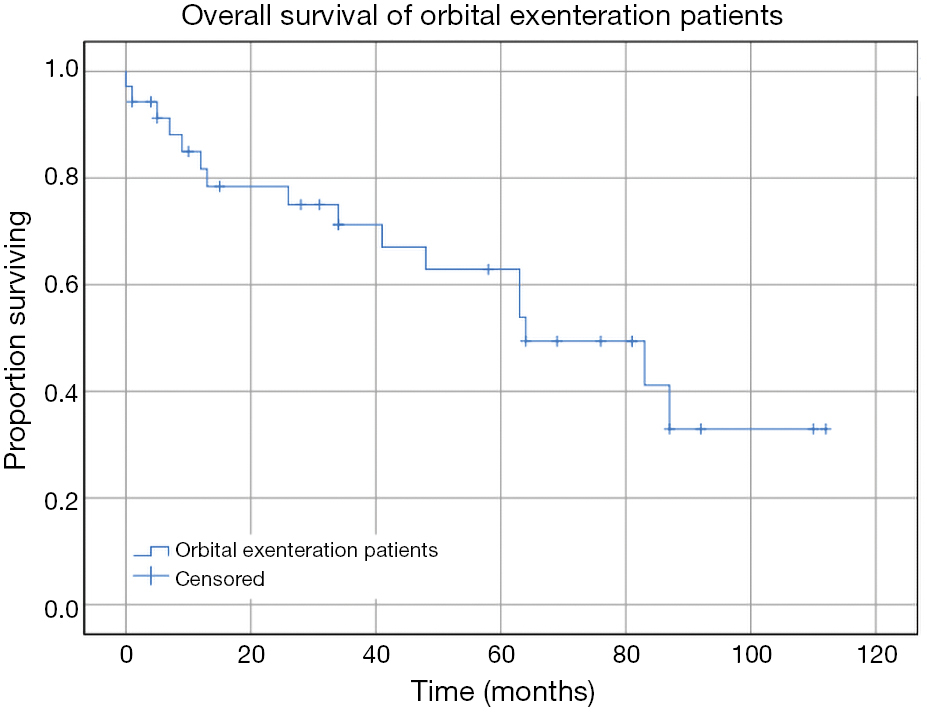 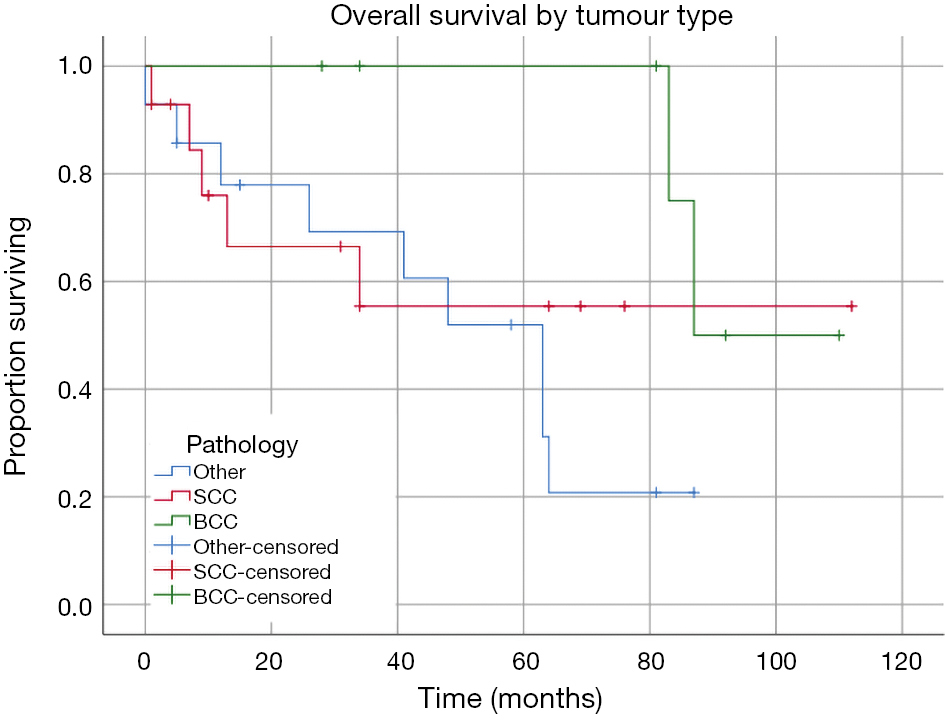 Perineural invasion (PNI) is considered an important prognostic factor for malignancies involving the orbit. Peri-orbital SCC in particular, has demonstrated PNI in a significant proportion of patients undergoing surgical resection, with time to treatment an important factor for reducing orbital invasion and PNI (23). In patients with SCC, PNI and lymphovascular invasion are both associated with increased risk of metastases and death from disease (24). Adenoid cystic carcinoma is also associated with a particularly poor prognosis due to its protracted course, and high rates of PNI (25). In our cohort 5 patients exhibited PNI with or without lymphovascular invasion: adenoid cystic carcinoma (1 of 3 patients with this pathology), SCC, BCC, sarcoma and oncocytic carcinoma. Subgroup survival analysis was not performed in the setting of small numbers of patients with PNI and lymphovascular invasion.

OE is reserved for patients with life threatening peri-orbital or orbital malignancy for whom less invasive surgical procedures would not be adequate. We report our data of patients who have undergone OE at our centre, with reasonable survival outcomes. The tumour histology in our cohort is diverse, which is consistent with the literature. The significant morbidity associated with OE, and risk of recurrence following surgery highlights the importance of informed consent and discussion about likely survival and quality of life following surgery.

Ethical Statement: The authors are accountable for all aspects of the work in ensuring that questions related to the accuracy or integrity of any part of the work are appropriately investigated and resolved. Prior to commencing the study, ethics approval was granted by the Human Research and Ethics Committee of the local health district.