In Australia, the most common malignancy of the parotid gland is metastatic cutaneous squamous cell carcinoma (cSCC), typically arising from cutaneous head and neck disease (1). It has been demonstrated that metastatic disease to the parotid and cervical neck confers quite a poor prognosis (2). The presence of metastatic cSCC to the parotid represents at least stage III disease, typically treated with bimodal therapy in the form of surgery and post-operative radiation therapy (3). In 2002, O’Brien presented a staging system for metastatic cSCC to the parotid, which separates parotid “P stage” from neck “N stage” (1). Despite not forming part of the American Joint Committee on Cancer staging system, this delineation continues to influence current treatment strategies.

At present, there is no consensus on the optimal management of potential occult neck metastases in the parotid positive and neck negative (P+N0) patient (4,5). Australian series have reported occult neck metastases rates between 15 and 35% (6-8). The presence of preoperatively known positive neck disease (P+N+) typically mandates parotidectomy and surgical clearance of the nodal basin via formal neck dissection. However, in the P+N0 patient with no clinical or radiological evidence of neck disease, given the parotid is managed surgically, the neck may be treated surgically, treated with radiation, or a combination of both.

This retrospective case series will review the management of P+N0 patients. The principle aim of the study was to determine whether elective neck dissection conferred disease-free or overall survival benefits in this series of patients.

Institutional Human Research Ethics Committee approval was obtained (approval number RPH HREC 15-088). This study is a retrospective case series of patients with metastatic cutaneous SCC to the parotid gland without preoperative evidence of neck nodal metastases. Prospectively maintained theatre management software was interrogated to identify all patients who underwent “parotidectomy” during the study period. Histopathology reports were then reviewed to identify patients with SCC. Patients were eligible for inclusion if they underwent parotid surgery for metastatic squamous cell carcinoma at one of Western Australia’s three tertiary hospitals, between June 2002 and June 2013. All cases were treated with curative intent. Patients for whom there was insufficient data on chart review were excluded (n=13). 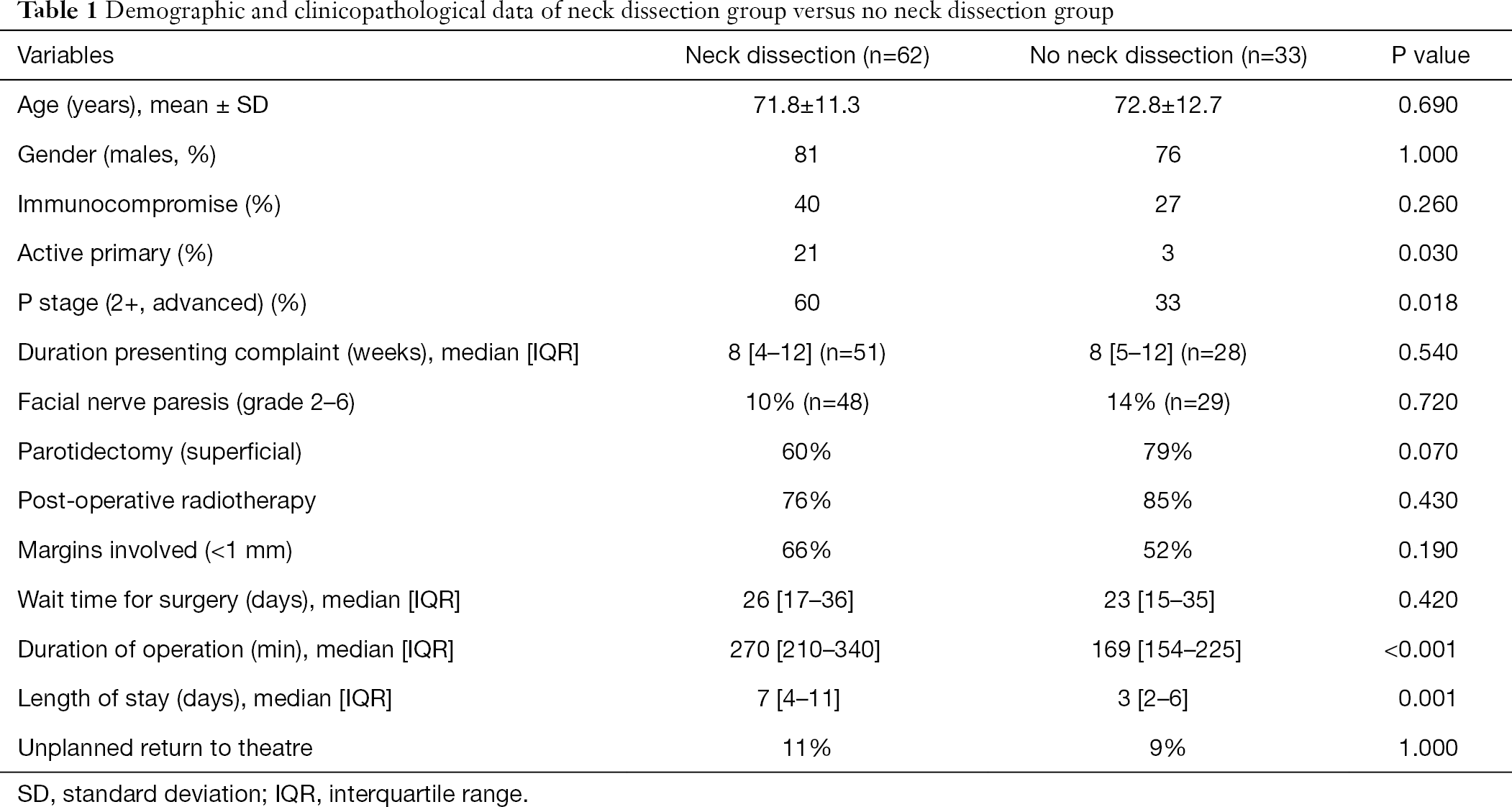 The Western Australian Cancer Registry was interrogated a minimum 60 months following completion of treatment for each case. This facilitated collection of long-term recurrence and mortality data, which is routinely recorded by the Registry.

To compare groups undergoing parotidectomy and neck dissection against those receiving parotidectomy only, a combination of statistical analyses was employed. When outcomes were categorical with two levels, Fisher’s exact test was used with odds ratios (ORs) and confidence intervals (CIs) presented for significant results. When outcomes were continuous either an independent-groups t-test or the non-parametric Mann-Whitney U were used, depending on whether parametric assumptions had been met. Survival analyses were conducted with Kaplan-Meier curves.

A total of 522 patients were identified as undergoing “parotidectomy”, with 219 for SCC. Of these, 13 patients had insufficient data, 29 underwent parotidectomy but the parotid parenchyma was not involved with the disease, therefore 177 met inclusion criteria. Ninety-five patients with metastatic cSCC to the parotid had no clinical or radiological evidence of neck nodal metastases at initial presentation. Sixty-two patients (65%) underwent an elective neck dissection, 33 did not. The demographic and clinicopathological data for the two groups are listed in Table 1. Demographics were similar between the groups. Patients who underwent neck dissection were more likely to present with an active primary (OR =8.49, 95% CI: 1.06–68.11) and had more advanced parotid pathology (OR =2.96, 95% CI: 1.22–7.16), as measured by O’Brien P stage (1).

Management of the neck 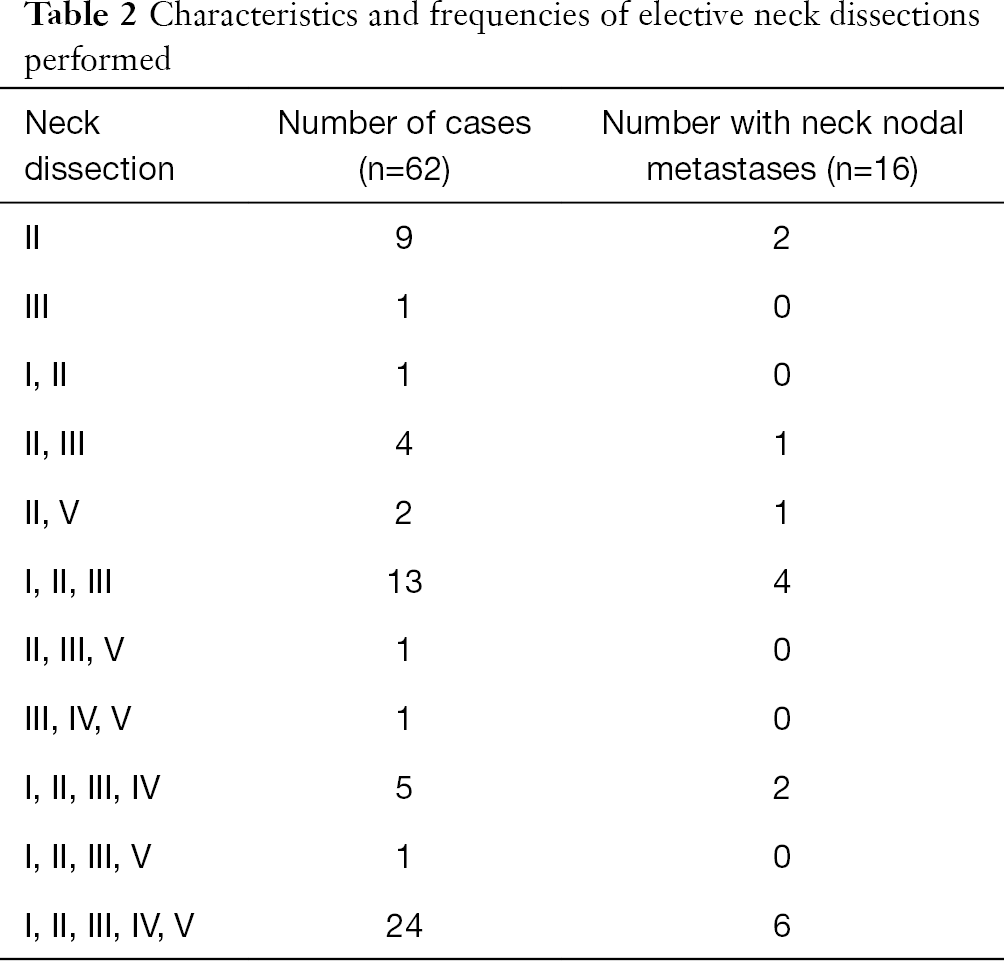 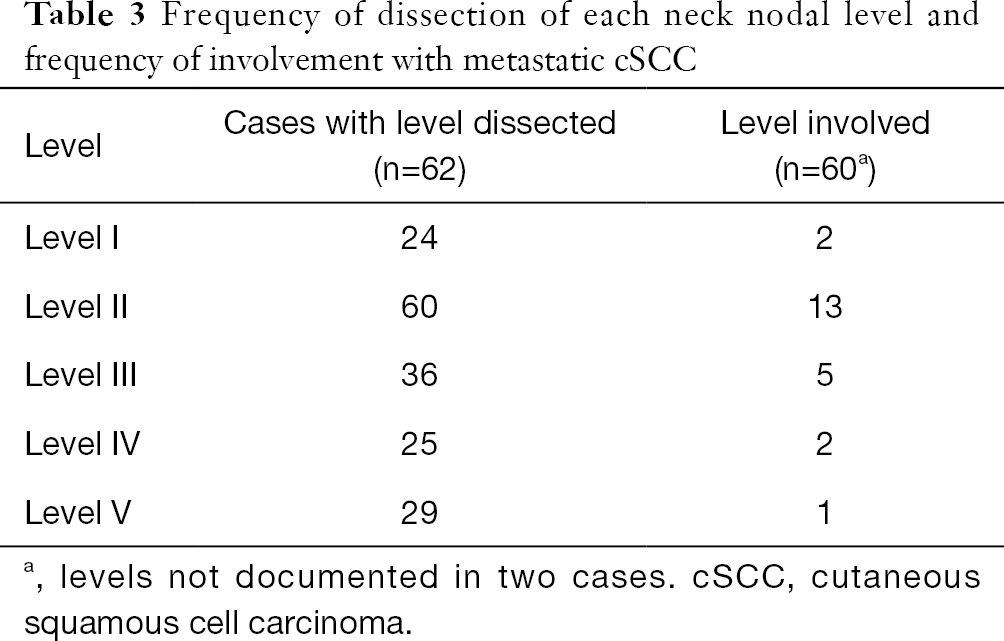 The rate of occult neck metastases was 25.8%, with 16 of 62 cases that had a neck dissection having pathologically involved lymph nodes. The most commonly involved level was level II (involved in 21.7% of those with level II dissected), followed by level III (see Table 3). Of the 62 patients who underwent an elective neck dissection, we compared those with occult metastases (n=16) to those with histologically clear necks (n=46). There were no differences in demographics or clinical presentation (immunocompromise, duration of symptoms, surgical wait time, presence of active primary, O’Brien P stage or facial nerve involvement) (see Table 4).

Surgical wait time was equivalent both groups. The median operative time for those who had a neck dissection was 270 minutes, compared to 169 minutes for those who had parotid surgery only (P<0.001) (see Table 1). The operations were performed in tertiary, teaching hospitals. The median length of inpatient stay was 7 days for those who underwent elective neck dissection, compared to 3 days for those in whom the neck was surgically spared (P<0.05). Unplanned return to theatre for operative management of complications was similar between the two groups.

This retrospective study presents a large series of patients with metastatic cSCC to the parotid treated surgically, without pre-operative evidence of neck disease. The rate of occult neck disease in 62 patients who underwent elective neck dissection in this series was 25.8%. This is the second largest Australian series of its kind, with Ebrahimi et al. reporting the largest group of cP+NO elective neck dissections, with an occult rate of 21% (9). Four Australian groups have reported rates of occult neck disease between 15% and 24% (6,10-12) with two reporting a rate of 35% (7,8). International centres have reported rates between 16% (New Zealand) (13) and 44% (USA) (4).

There was significant variability in the management of the neck in our cohort. Surgeons were more likely to perform an elective neck dissection on patients with an active primary or more advanced O’Brien P stage at presentation. It is not clear whether surgeon preference, patient preference, cancer multidisciplinary meeting consensus, or other factors contributed to the management decisions. The marked variability in neck levels dissected also further convolutes interpretation. However, when elective neck dissection is performed, taking levels II and probably III, could be considered. In this series, a neck dissection resulted in a longer time under general anaesthesia and a longer inpatient hospital stay. In this series, not all patient received post-operative radiation therapy, which further confuses interpretation of outcomes. Hirshoren et al. (2018) found that post-operative radiation therapy conferred a survival benefit.

Ideally, one would be able to stratify the risk of occult neck nodal metastases pre-operatively, to guide surgical management. In this series, no pre-operative demographic or clinical data was identified as predictive of neck disease and no method to identify the group of patients at risk of occult metastases has been established.

This study has limitations inherent to any retrospective study including changing clinical practice over time and inaccuracies of retrospective data collection. Despite being the second largest study of its kind identified in the literature, the sample remains underpowered and the small size limits analysis of subgroups within the cohort. The findings would be generalisable to an Australian population.

We know that patients with metastatic cSCC to the parotid have a poor prognosis, regardless of neck involvement. In those with pre-operative evidence of parotid metastasis but no evidence of neck disease, no consensus as to whether a neck dissection in this cohort of patient confers disease-free or overall survival has been reached. There continues to be a need for high-quality, prospective research to determine the best way to treat these patients given this retrospective case series confirms poor survival outcomes in this group.

Ethical Statement: The authors are accountable for all aspects of the work in ensuring that questions related to the accuracy or integrity of any part of the work are appropriately investigated and resolved. Institutional Human Research Ethics Committee approval was obtained (approval number RPH HREC 15-088).