The prophylactic use of antibiotics in submandibular gland excision: an audit and review of risk factors

Submandibular gland excision is a common procedure in head and neck surgery (1). The main indications are sialadenitis or tumors of the gland (1-3). Excision of submandibular gland is considered a clean procedure, as defined by the American National Academy of Science and National Research Council. This is defined as a surgical wound with no violation of septic technique, no signs of infection or inflammation and no mucosal barrier or hollow viscous breached. This implies no manipulation of the gastrointestinal, genitourinary or respiratory system (4,5). The current evidence-based guideline suggests that antibiotic prophylaxis is not warranted for clean otolaryngology procedures such as salivary gland excision. However, patients undergoing submandibular gland excision were often prescribed antibiotics.

Current literature suggests that risk factors such as an increased body mass index (BMI), immunosuppression, history of smoking and alcoholism increase risk for surgical wound complications. Diabetes, although not a direct risk factor for infection, has been associated with the development of prolonged and more severe infections (5-7). The use of antibiotics in the peri-operative period may be indicated in these patients.

Ethics approval was granted from the health institutions ethics board (LNR/19/Austin/23). Data was stored securely in a password protected Microsoft Excel spreadsheet.

Data to stratify the risk of developing an infection such as demographics, BMI, smoking status, alcohol intake, diabetes, immunosuppression and other co-morbidities was collected. The study also looked into the indication for the procedure, as well as the histological status of the gland.

Fifty-four patients were included in this study. The age of patients ranged from fourteen to eighty-seven years-old, with a median age of fifty-one years-old. The male to female ratio is 3:2.

Postoperative complications documented were all related to wound integrity, specifically, wound infection, hematoma and seroma (see Table 2). In total, only nine (16.7%) patients developed one of these complications.

Five patients developed a wound infection. Two were superficial wound infections that required re-admission and treatment with IV antibiotic therapy. Both of these superficial wound infections were detected within the first week and both of these patients had received antibiotics on induction only. A further two patients developed more significant wound infections. One patient developed an abscess, which was drained on the ward, and managed with intravenous antibiotics and regular dressing changes. Another wound abscess required drainage in theatre under general anesthetic. Both patients formed an abscess after the first week postoperatively, but within the first month. These two patients received antibiotics on induction of anesthesia and post-operatively. Most significantly, one patient developed necrotizing fasciitis and required return to theatre multiple times for wound debridement, prolonged intravenous antibiotics, and transfer to statewide hyperbaric oxygen therapy center. This patient did not receive antibiotic prophylaxis.

The result of the data on risk stratification is summarized in Table 3. 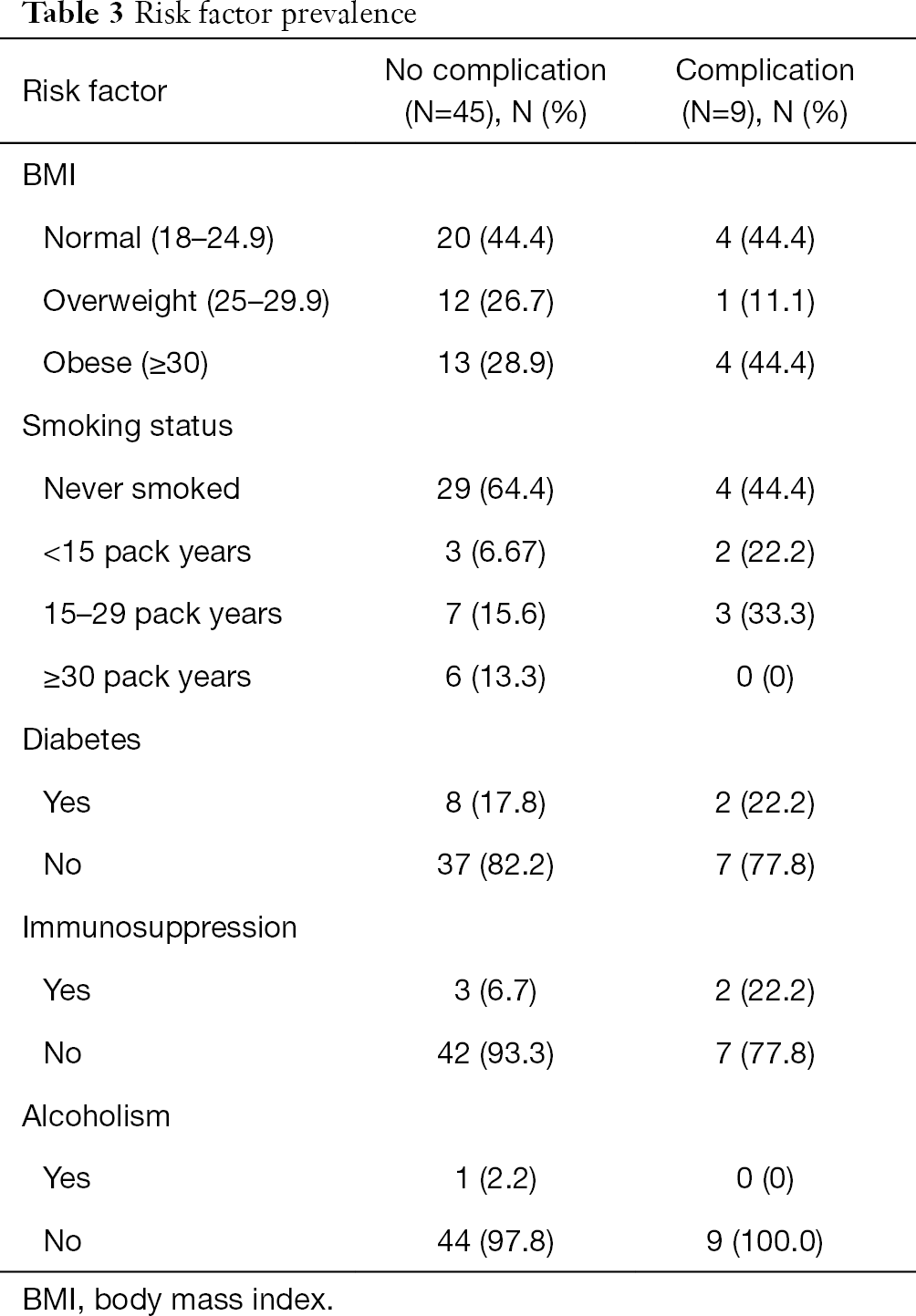 No patient who developed a complication had co-morbidities associated with misuse of alcohol or documented alcohol abuse.

Among fifty-four patients analyzed over a nine-year period, nine patients (16.7%) developed a complication; this includes: five (9.3%) with wound infection, two (3.7%) with hematoma, and two (3.7%) with seroma. The findings were consistent and comparable with rates reported in other literature, where risk of wound infection, is reported to be from 0% to 14% post submandibular gland excision (3).

There is no obvious association seen between surgical complication and elevated BMI in this study. Many with complications had a normal BMI. The most significant complication being a necrotizing fasciitis, was seen in the patient with BMI of 40. A review of head and neck literature failed to elicit any articles reviewing elevated BMI and development of complications post submandibular gland excision. However, a few studies have looked into BMI and complications post-parotidectomy. In a retrospective study of 400 parotidectomies, no significant relationship between BMI and surgical complications were seen. (8). Similarly, in a larger cohort of 3,000 parotidectomies (9), increased BMI did not significantly increase the risk of complications. In fact, they concluded that a low BMI could be contributing to the development of complications. The mechanism for this is poorly understood and likely multifactorial (9). Loss of muscle mass related to old age, malnutrition and undiagnosed chronic illnesses are possible explanations (8,9). No patient in this study had a low BMI.

Immunosuppression, presence of diabetes and heavy alcohol intake were not frequently observed amongst the complication group. Diabetics have been established as possibly at a higher risk for the development of a facial nerve palsy post parotidectomy (8), however, diabetes has not been shown to specifically impact wound healing and wound related complications (8,9). Diabetics are at an increased risk for more severe infection, compared to nondiabetics (5-7).

Johnson et al. (10) noted that only 10% of surgeons were utilizing prophylactic antibiotics. On the contrary, in this audit, the rate of antibiotic prophylaxis was highest in the earliest years included in this study. A gradual decline in utilization of antibiotic prophylaxis was observed over the period studied. Possible explanation for this pattern is the presence of junior consultants who are more familiar with recent evidence-based literature and less likely to prescribe antibiotics. Other explanations include a failure to differentiate this procedure from a clean contaminated surgery given the glands’ relation to the oral cavity; perceived lack of side effects from antibiotic use; surgeons’ anxiety and possible medico-legal ramifications (10).

The main limitation of this study is the retrospective nature of the study. Data collected was obtained from reliable electronic medical records. Some of the information utilized was obtained from patient completed pre-admission questionnaires, this includes alcohol intake, smoking history and height and weight. Moreover, this study has a small patient size. Numbers were not significant to allow for statistical analysis to draw concrete conclusions. A larger, prospective randomized control trial should be performed to evaluate the value of antibiotic prophylaxis patients with risk factors for wound complications post submandibular gland excision.

Conflicts of Interest: The data in this article has been presented as a poster at the RACS ASM meeting in Bangkok, May 2019.

Ethical Statement: The authors are accountable for all aspects of the work in ensuring that questions related to the accuracy or integrity of any part of the work are appropriately investigated and resolved. This study was approved by the Austin Health Human Research Ethics Committee (HREC). The HREC reference number is LNR/19/Austin/23. Patient consent was not necessary due to the retrospective nature of this review.