Angioleiomyoma of the external auditory canal: a rare diagnosis—case report and review of the literature

Angioleiomyomas (ALMs) are benign tumors arising from smooth muscle cells, which typically occur in the alimentary tract, uterus or lower limb in the 3rd to 6th decade of life. Tumors of smooth muscle are uncommon in the head and neck region. It is very uncommon for a leiomyoma (LM) to occur in the external auditory canal (EAC), and ALMs even more so. Only 5 other cases of ALM (1), from a total of seven cases of LM of the EAC have been reported in the literature (2-6).

In this report, we present a case of a 59-year woman with a 30-year history of symptoms. A review of the literature is also presented.

A 59-year-old female presented with hearing loss initially thought to be secondary to secondary to wax impaction. She had an associated 30-year history of bilateral non-pulsatile and constant tinnitus. The patient also described a slight aural fullness in her left ear and felt her hearing may have subjectively decreased. There was no history of otalgia, otorrhea or vertigo. Her past medical history was notable only for medically-managed hypertension. She had no relevant family medical history.

Physical examination demonstrated a mildly tender, opaque and mildly vascular soft tissue mass located at the superior aspect of the left external ear canal, obstructing 30% to 40% of the ear canal lumen. The right ear was normal. The remainder of the examination including cranial nerves was unremarkable.

Magnetic resonance imaging (MRI) of her brain and posterior fossa demonstrated a small lesion in the bony portion of her external ear canal (Figure 1). The lesion was isointense to brain parenchyma on both T1- and T2-weighted sequences. There were no features to suggest demyelination. Computed tomography (CT) of petrous temporal bones demonstrated an asymmetric soft tissue thickening measuring 6.5 mm in diameter in the bony portion of the left EAC (Figure 1). The lesion was abutting the tympanic membrane. There was no associated bony erosion.

An audiogram demonstrated mild hearing loss of air conduction at 8,000 Hz in the left ear, with all other frequencies normal bilaterally.

The patient subsequently underwent endoscopic assisted excision of the lesion under general anesthetic. Intraoperatively, the superiorly based well-circumscribed opaque lesion was visualized arising from the bony-cartilaginous junction, abutting the tympanic membrane (Figure 2). It was partially adherent to the tympanic membrane immediately adjacent to the lateral process of the malleus and the attic. The mass was peeled off the pars flaccida, and a subsequent small attic perforation was repaired with Gelfoam. 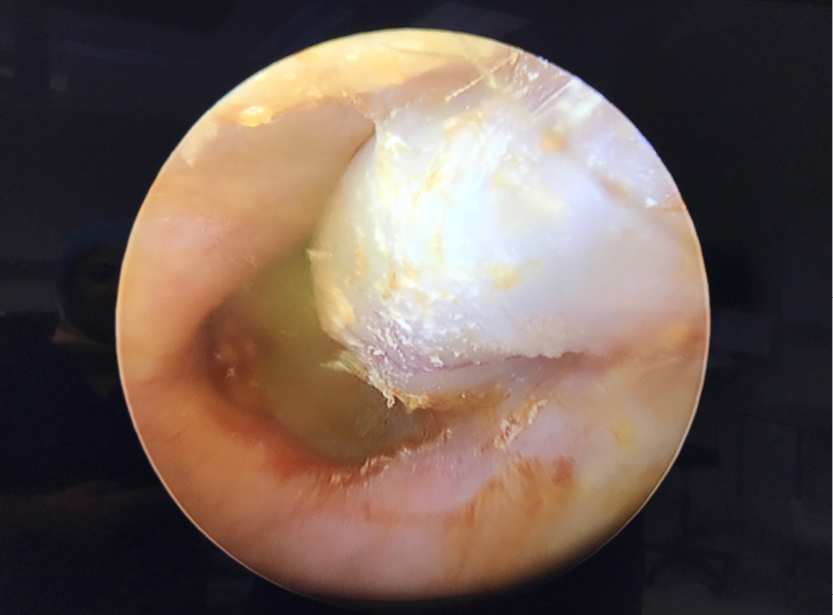 The macroscopic specimen was irregular and opaque, measuring 10×5×5 mm. There was no cystic structure identified. Histopathological analysis (Figure 3) demonstrated a mass with closely packed bundles of plump eosinophilic cells. Immunohistochemistry shows diffuse positive staining for smooth muscle actin (SMA) and negative staining for S100 and desmin. Staining for CD34 highlights the numerous small vessels within the lesion. There was no evidence of significant nuclear pleomorphism or increased mitotic activity. The findings are consistent with ALM. 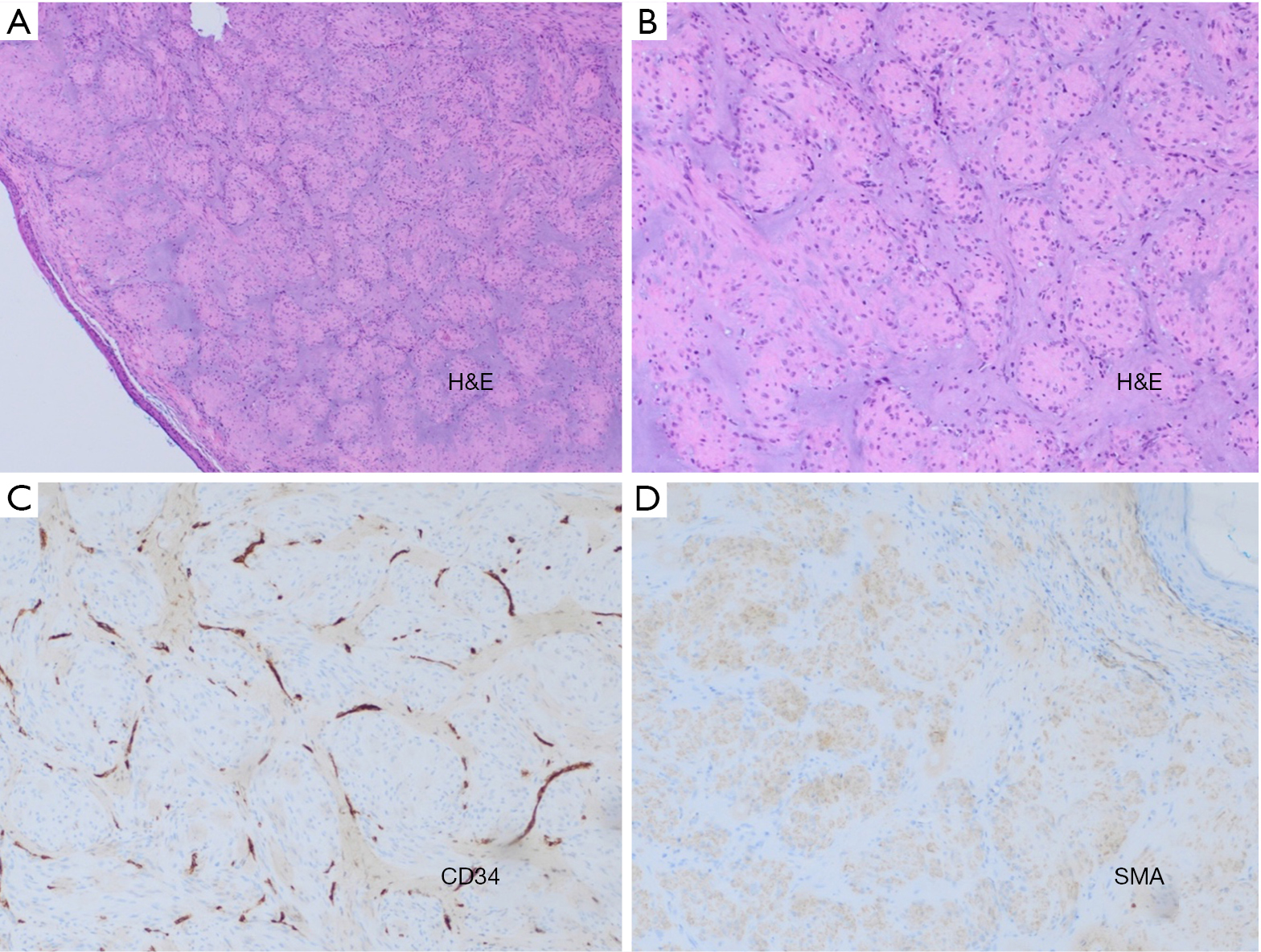 The patient recovered well postoperatively with complete re-epithelization achieved within 4 weeks of surgery. The Attic repair was successful with subjective reduction in tinnitus. Her postoperative audiogram showed no significant change.

Benign tumors of the EAC are rare with more common benign lesions being osteoma, melanoma or polyps (6). Our case represents the 8th case overall of LM, and 6th of ALM subtype of the EAC reported in the literature to date. An ALM (ICD-O code 8894/0) is a benign soft tissue tumor of vascular smooth muscle origin. Although relatively common in the lower extremities (accounting for 4–5% of all soft tissue tumors), they are infrequently found on the head and neck. The mean age of diagnosis of EAC tumors is 42.5 (Table 1). Their incidence in females in nearly twice that of males when arising in the lower extremity, although EAC LMs are 4 times more common in males than females (Table 1). While the pathophysiology of LMs is not fully understood, both trauma and venous stasis have been hypothesized as contributing factors (2,7). 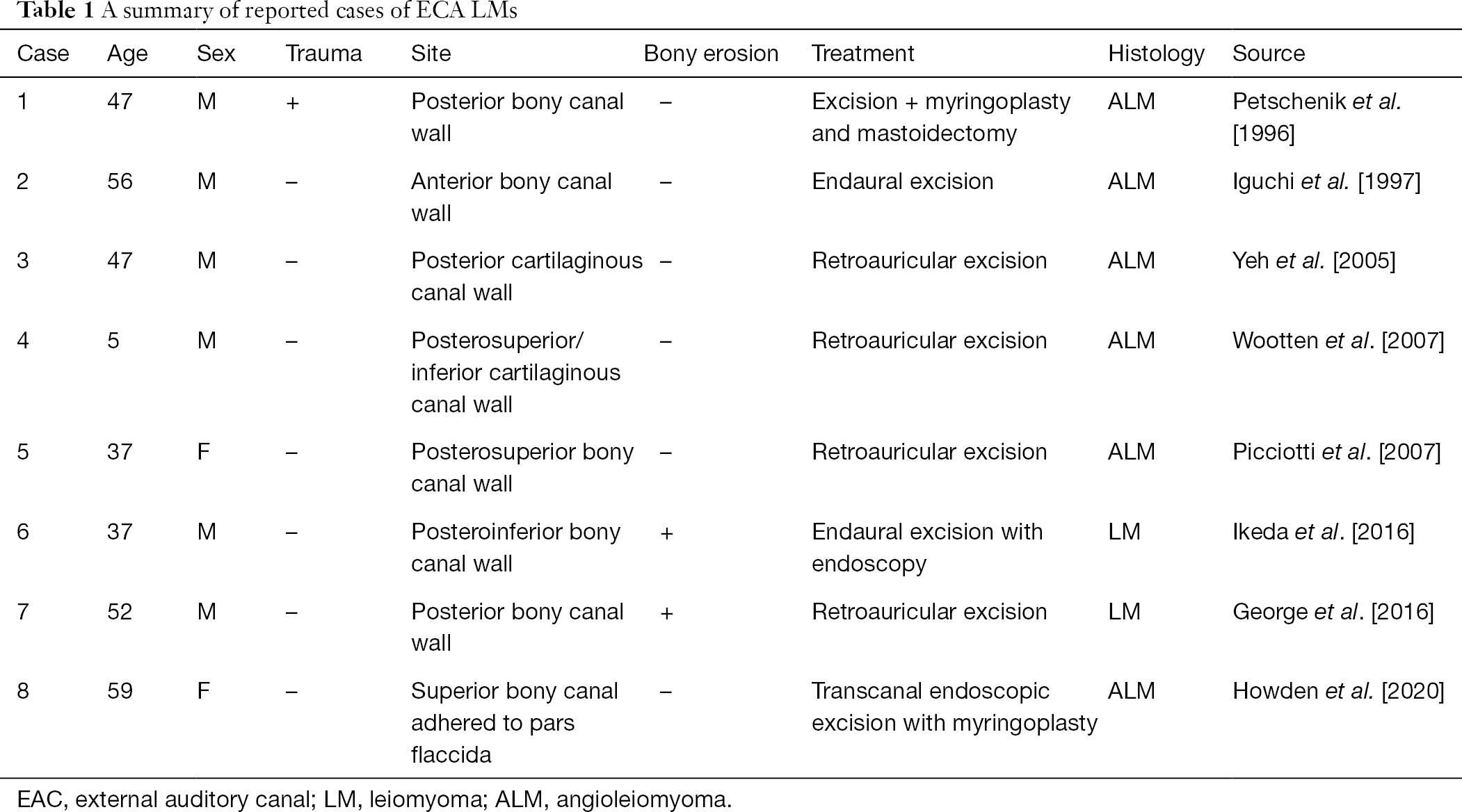 LMs exist on a morphological spectrum with the vascular tumor myopericytoma and are divided into solid, venous and cavernous subtypes. No cavernous LMs of the EAC have been reported to date.

ALMs arise from the smooth muscle cells of the muscular layer of vascular structures, while the solid LM (or piloleiomyoma) have been postulated to have arisen from the erector pili muscles of the skin (6,8).

Further understanding of the nature of EAC LMs relies on accumulated experience through case reports and literature reviews. Table 1 demonstrates all accounts of EAC LMs in a literature search of Medline and PubMed. The lesion tends to have a male predominance in the EAC (compared to females, which are more common outside the head and neck region). Although able to arise from anywhere along the EACs extent, the lesion seems to be more common in the bony portion.

Bony erosion on CT or MRI in the EAC would raise suspicion of either cholesteatoma or other malignant processes. Interestingly, it has been demonstrated that both cases of LM arising from erector pili muscles (6,8) have undergone a degree of bony erosion associated with the lesion Table 1), perhaps suggesting a more invasive nature of the tumor compared to its vascular counterpart. This finding makes it an important differential diagnosis in the investigation of suspected invasive disease.

In our case, the initial imaging investigation was MRI. This was originally reported as normal, despite the request detailing a visualized canal mass. The lesion was only visualized on MRI retrospective to CT and excision. Its presence was confirmed with the reporting radiologist. Although all previously published cases underwent CT, none detail investigation with MRI alone. The mass is certainly more discernible on CT than it is on MRI, and this may suggest a greater sensitivity of CT in the diagnosis of LMs of the EAC.

All cases published cases were managed surgically. While classically an endaural or retroaural microscopic approach had been favored, our case is the second case described of the excision of a LM solely via a transcanal endoscopic approach without extra aural incision as outlined by Ikeda et al. (6) in 2016. Enhanced visualization and direct vision of concealed areas are advantages of endoscopic ear surgery over the traditional microscopic techniques. Although transcanal endoscopic ear surgery has been a somewhat controversial topic in the past, its popularity is increasing among head and neck surgeons (10). The use of endoscopic ear surgery is still in its infancy and requires further high-quality data on clinical outcomes, particularly comparative against traditional direct-vision techniques.

LM of the EAC is a rare diagnosis. The tumor is an important differential in the diagnosis of tumors of the EAC. It occurs mainly in adult males, in their fourth decade of life. The treatment of choice is complete excision, with a transcanal endoscopic approach an effective technique in appropriate patients.

Ethical Statement: The authors are accountable for all aspects of the work in ensuring that questions related to the accuracy or integrity of any part of the work are appropriately investigated and resolved. The patient consented for case report and publication of her condition.