The intraoral approach for removal of hilar submandibular stones: a case series and review of the literature

Salivary calculi are the most common cause of salivary duct obstruction. Most of these occur in the submandibular gland (SMG) and its ductal system. Based on their location, these are classified as proximal and distal. Forty percent of SMG stones are located in the distal part of Wharton’s duct, which can be simply removed intraorally with a transmucosal incision near the duct orifice (1).

However, for hilar stones, the intraoral removal technique can be difficult due to their relatively deeper position and risk of damage to the lingual nerve (1-4). Coupled with the traditional notion that obstructive proximal stones lead to a non-functioning gland secondary to scarring and fibrosis and increased risk of glandular infection, most patients are offered sialadenectomy via a transcervical approach instead.

On the contrary, it has been demonstrated that there is good recovery of salivary function after removal of an obstructing calculus (5-7). This has formed the basis for a growing number of overseas studies, which have collectively demonstrated excellent results with a functioning gland and minimal morbidity in intraoral removal of proximal or hilar submandibular stones. With the aim to influence local practice, in this paper we describe our technique for removing hilar submandibular stones and present a review of the current literature.

The patient is placed on the operating table in a supine position. Transnasal intubation is preferred with general anaesthesia and patient is positioned with a head ring and shoulder roll. Preoperatively, local anaesthetic is infiltrated submucosally in the floor of mouth region. In the selected, compliant patient, local anaesthesia may alone be sufficient.

The surgeon stands on the side contralateral to the stone with the assistant on the ipsilateral side pushing the gland up with one hand from below. The other hand is utilised to retract the cheek with a cheek retractor. A mucosal incision is made into mucosa of the floor of mouth. The mucosa is then incised with dissecting scissors in a plane parallel to the mandible.

Dissection is continued to identify the lingual nerve which will be identified by its white, glistening appearance. The nerve is dissected posteriorly until the proximal duct and hilum is identified, and gently retracted superiorly away from the duct and hilum. Venous bleeding in the region of the lingual nerve was controlled with bipolar diathermy away from the nerve and applying adrenaline-soaked surgical patties over.

The stone is palpated in the hilum with the assistant’s hand elevating the gland into the floor of mouth. The hilum is incised to release the stone. The wound is irrigated with saline and haemostasis is achieved. We leave the incision open to heal by secondary intention, without ductoplasty.

We have performed a retrospective chart review of a single surgeon’s experience with hilar submandibular stones who underwent intraoral removal with preservation of the SMG over the last 9 years. Patient demographics were recorded including age, gender, co-morbidities, size and location of stone, post-operative course with a particular focus of salivary function and status of lingual nerve by clinical examination.

General post-operative complications were recorded, which include infection and recurrence of symptoms related to sialolithiasis. Post-operative salivary function was clinically assessed with palpation of the ipsilateral SMG, looking for expression of saliva.

Formal ethics approval was not required as the study was primarily a clinical audit with no identifiable patient data included.

Our findings are summarised in Table 1. A total of ten cases were included in this series. All patients had a single calculus identified and removed. All calculi were palpable bimanually. The mean stone diameter is 8 mm (range, 4–16 mm). 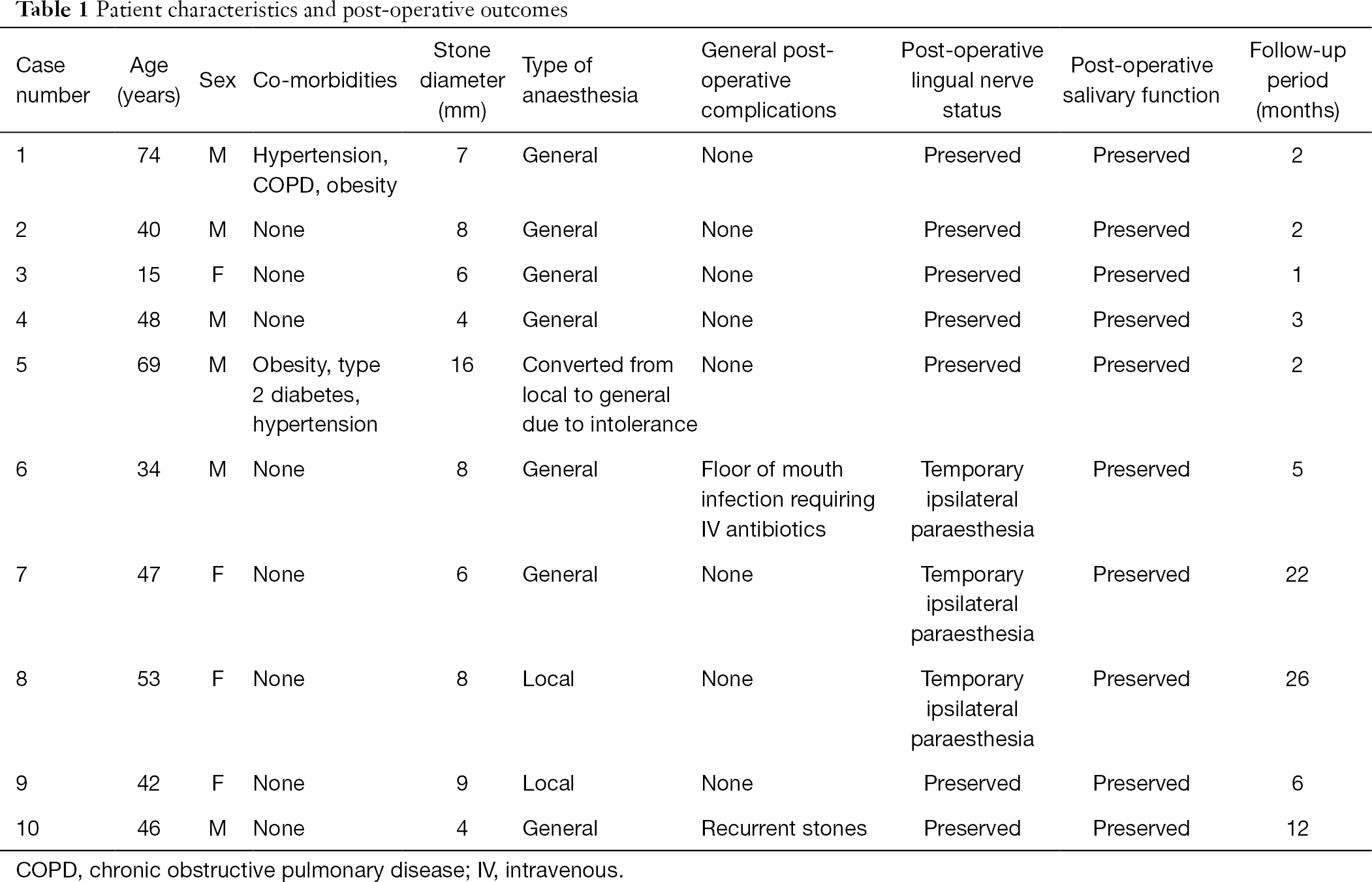 Intraoral removal of the calculi was successful in all cases, with no recorded injury to the lingual nerve intraoperatively. All patients were either discharged on the same or following day after the operation, with no immediate post-operative complications.

One patient had to be re-admitted day 3 post-operation due to infection. He developed increasing pain, swelling and pus discharge from the ductal orifice. He clinically responded well to a short course of intravenous (IV) flucloxacillin and regular sialogogues. This patient had a difficult dissection into the hilar region where the submandibular calculus was located. The calculus was very large and due to difficult access, was removed in fragments with subsequent washout.

All patients were routinely followed up in the outpatient clinics 2 weeks post-op, with further follow-up as required. Thirty percent (3/10) of the patients experienced temporary ipsilateral lingual nerve paraesthesia. All patients had preserved salivary function post-operatively on clinical evaluation. There were no cases of floor of mouth contractures or fibrosis and floor of mouth haematomas amongst our patients.

The traditional transcervical approach for SMG resection remains as the standard operative procedure for treatment of intraglandular and large submandibular stones. However, this approach is associated with not insignificant risk of complications including marginal mandibular nerve injury (10% temporary, 3% permanent) (2), risk of lingual and hypoglossal nerve palsy and potential cosmetic defects due to external scar (8).

Several minimally invasive techniques have been suggested and remain in use to remove submandibular calculi, including extracorporeal lithotripsy, interventional radiology and sialoendoscopy (1,9-11). Nevertheless, the success rates for such techniques are variable and inappropriate for larger stones or when there is severe inflammation of the SMG (12,13). However, the intraoral surgical approach can be used to remove reasonably large hilar stones with minimal morbidity. Various studies have described successful removal for mean stone sizes between 7–9 mm, up to 30 mm in size (13-15). This approach has been used in the excision of SMG as well (4,16,17). It is safe in both paediatric and adult populations (17,18). A functioning gland can be preserved with low risk of conversion to an open operation or subsequent gland excision for recurrence.

Various intraoral techniques have been described in the literature (see Table 2). All techniques involve external digital pressure in the external submandibular triangle region when attempting to facilitate intraoperative exposure of the ductal stone. 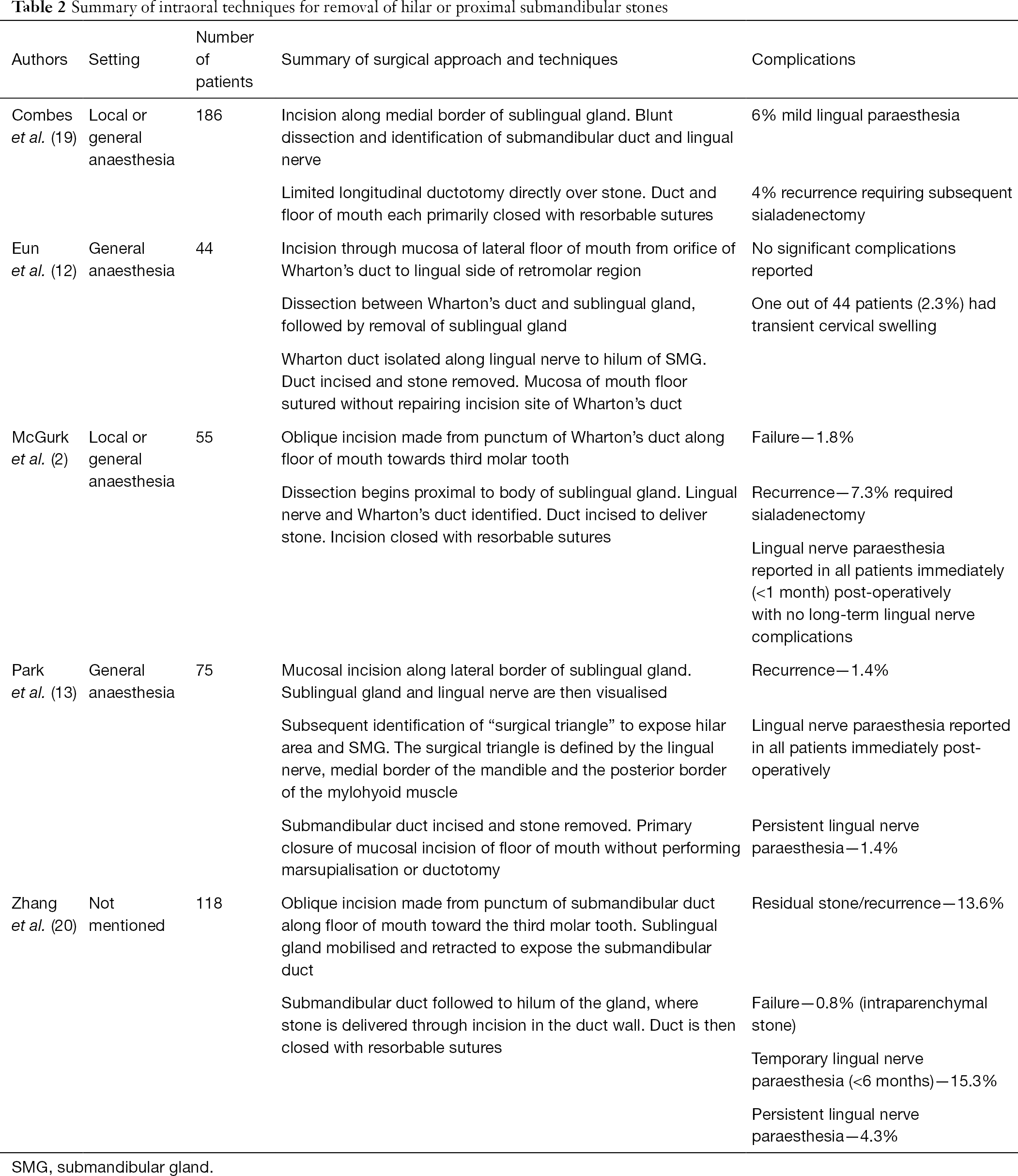 The advantages of the intraoral technique for removal of hilar submandibular stones include decreased post-operative pain, shorter inpatient stay and shorter operation time (12,21). It can also be successfully performed under local anaesthetic (12,13,19,22). Recurrent symptoms are uncommon post procedure, of which a small fraction is secondary to recurrent calculi formation (20,22,23). Post-operative ranula formation and infection of the SMG are very rarely encountered (2,23). The most important complication using this technique is perhaps lingual nerve injury. However, the bulk of evidence suggests in this approach that this is a temporary ipsilateral lingual nerve paraesthesia (Table 2—complications), as a result of mobilising the lingual nerve away from the operative field (12-14,19,20,22-24).

Given the numerous studies demonstrating largely successful intraoral removal of hilar submandibular stones, the intraoral approach should not be discouraged simply due to poor surgical field. Instead, the key clinical decision of choosing between transcervical or intraoral approach depends on stone palpability (2,13). Park et al. (22) has demonstrated that regardless of stone size, location or presence of infection, the intraoral technique will more likely be successful if calculi are palpable.

In our case series, all patients had successful intraoral removal of hilar submandibular duct stones. Despite the one patient who required a subsequent gland excision, the possibility of limiting morbidity and potential to preserve a functioning ipsilateral gland is sufficient in our opinion to warrant attempt at transoral excision. This is especially true in our ageing population who not infrequently have complaints of xerostomia. Preservation of a functioning SMG may provide some useful salivary flow. With the exception of our patient with post-operative floor of mouth infection, all remaining patients had a short hospital stay with no long-term post-operative complications and good salivary function from the SMG on the operated side. The infection may be a consequence of stone fragmentation and difficult exposure. Overall, our results have shown that the intraoral technique for removal of hilar stones is safe and effective.

There are a few limitations of our study. Firstly, this is a retrospective case series, which limits objective analysis of parameters such as post-operative pain and quantitative salivary function. Secondly, given the limited number of patients reported here, these patient characteristics may not be reflective of that of the general population and hence the intraoral approach may not be suitable for every patient with hilar submandibular stones as a result. Thirdly, post-operative salivary gland function should ideally be assessed objectively with scintigraphy scans, however this can be expensive and impractical given the geographic location of our patients. Furthermore, we do not have this facility on-site and hence only able to rely on patient symptom and clinical examination during follow-up. Lastly, our results to date are representative thus far of a short follow-up period, and longer-term follow-up may be warranted. Hence, we are unable to account for any long-term complications such as recurrence of submandibular calculi, which may necessitate repeat intraoral removal or sialadenectomy.

In conclusion, our experience with using the intraoral technique for removal of hilar submandibular calculi stones has been successful and safe for a small cohort of patients thus far. There has been low morbidity and high chance of preservation of a functioning SMG. Our results are consistent with other existing studies, which have produced similar results. Through this paper, we hope to raise a discussion point on the use of transoral approach in Australia, as it is not widely performed by local surgeons. Hence, the intraoral technique should be encouraged as an alternative to sialadenectomy for removing stones in the hilum submandibular duct.

Conflicts of Interest: All authors have completed the ICMJE uniform disclosure form (available at http://dx.doi.org/10.21037/ajo.2020.03.08). The authors have no conflicts of interest to declare.