Epistaxis can be classified as either anterior (90% of cases) or posterior (10%) based on the location of bleeding with the division between anterior and posterior nasal septum lying at the pyriform aperture (1,2). Anterior haemorrhages can often be managed with basic first aid and chemical- or electro-cautery (1,3).

In situations where these methods are unsuccessful or not practical, such as cases of posterior epistaxis, nasal packing may be required (1,4). Traditionally this involved the use of lubricated ribbon gauze or the use of a Foley catheter which is inserted along the nasal passage floor to the posterior nasopharynx with Kaltostat or ribbon gauze (1,5). However modern packs such as the Rapid Rhino provide easier and more effective alternatives and have become the mainstay treatment for posterior epistaxis in many centres (6). The duration of non-absorbable nasal packing is not specified in the literature, though in practice times range between 24–72 hours with oral antibiotic prophylaxis to cover against toxic shock syndrome (6,7).

Whilst representing an important management option for posterior epistaxis, packing with the Rapid Rhino has several drawbacks. These include requiring hospital admission whilst the packs are in-situ, trauma on insertion, patient discomfort, tissue necrosis, toxic shock syndrome and failure (1,4). Absorbable packing agents such as Nasopore®, Surgicel® or haemostatic glue have not been well researched for the primary treatment of posterior epistaxis, with most research focusing on utilization in the post-operative setting (7). Both arterial embolization and ligation have high success rates, though require significant resources, expertise and equipment (8-11).

A decision tree model was constructed to evaluate the cost-effectiveness of the management of posterior epistaxis using a gelatin-thrombin matrix (FloSeal) compared to the dual balloon Rapid Rhino (Figure 1). The decision tree model assumed patients managed with a Rapid Rhino were admitted to hospital and that those managed successfully with a gelatin-thrombin matrix were discharged from the emergency department. In cases where gelatin-thrombin matrix failed, it was assumed patients would be admitted for operative management (Figure 1). Estimates for the average cost of a ward bed admission, initial Emergency Department assessment and theatre were based on the financial year 2015/16 annual Victorian Cost Data Collection (VCDC) Cost Submission which included 130 patients with epistaxis discharged from Box Hill Hospital. Costs related to Rapid Rhino and the gelatin-thrombin matrix (FloSeal) were sourced from the product manufacturer. The cost of cephalexin was based on estimates from the pharmaceutical benefits scheme (PBS) (20).

Effectiveness for each modality was calculated using previously published data. A literature search was undertaken to identify studies that reported effectiveness rates for either FloSeal or the Rapid Rhino in posterior epistaxis. Random effects meta-analysis was used to calculate a cross-study pooled estimates to account for sampling error and heterogeneity in prevalence and incidence estimates (21).

This study was approved by the Eastern Health Ethics Committee (reference LR88/2016).

One-way sensitivity analyses (varying costs by ±25%) and a probabilistic sensitivity analysis was performed using second-order Monte Carlo simulation, a method to account for joint uncertainties in the parameter estimates (22). This involved randomly selected values from each input parameter’s distribution and generated results for that combination of values. This process was repeated 10,000 times. Gamma distributions were used for costs, and beta distributions for the transition probabilities. Tornado diagrams (which visually show the impact of varying the values of one parameter at a time) were produced to summarize the one-way sensitivity analyses and probabilistic sensitivity analyses results were summarized using acceptability curves. Acceptability curves summarizes the probability of an intervention to be more cost-effective than the comparator, according to the willingness-to-pay threshold (how much a funder is willing to pay to obtain the health outcome). The incremental cost-effectiveness ratio (ICER) was calculated using the following formula: 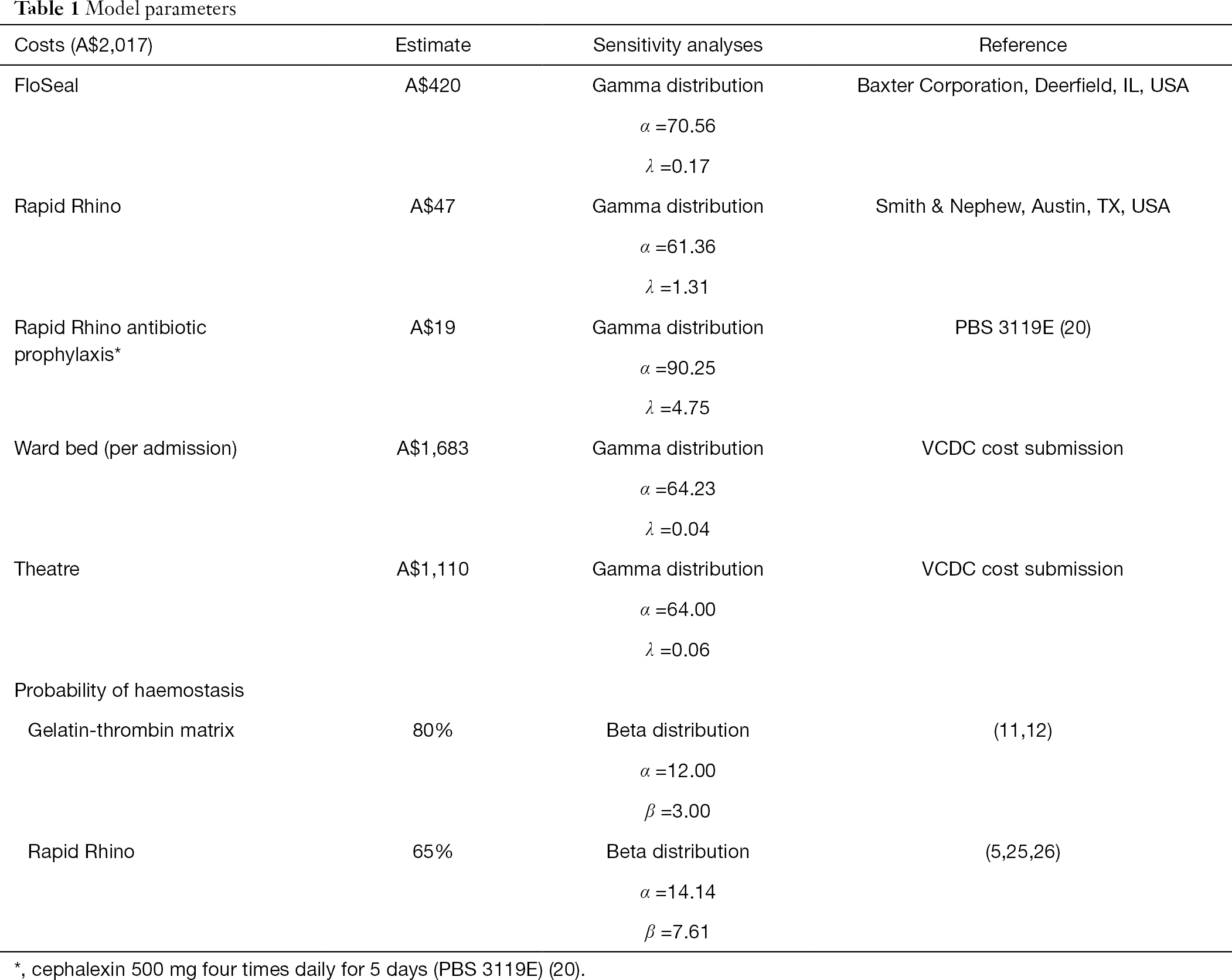 The mean cost of the gelatin-thrombin matrix was A$953 per patient (standard deviation A$226) and the mean cost for the Rapid Rhino was A$1,004 (standard deviation A$138). This was based on cost of the product itself, hospital admission and adjunct medications (i.e., oral antibiotics). The gelatin-thrombin matrix demonstrated more favorable results than Rapid Rhino in terms of cost-savings and haemostasis effectiveness.

These results equated to a cost saving of A$292 per posterior epistaxis case managed if using the gelatin-thrombin matrix instead of Rapid Rhino. The tornado diagram identifies which factors are most influential in changing the cost per case of posterior epistaxis managed (Figure 2). This diagram demonstrates that the most influential factors are the probability of haemostasis to Rapid Rhino, followed by the costs of the inpatient stay and cost of the gelatin-thrombin matrix (Figure 2). 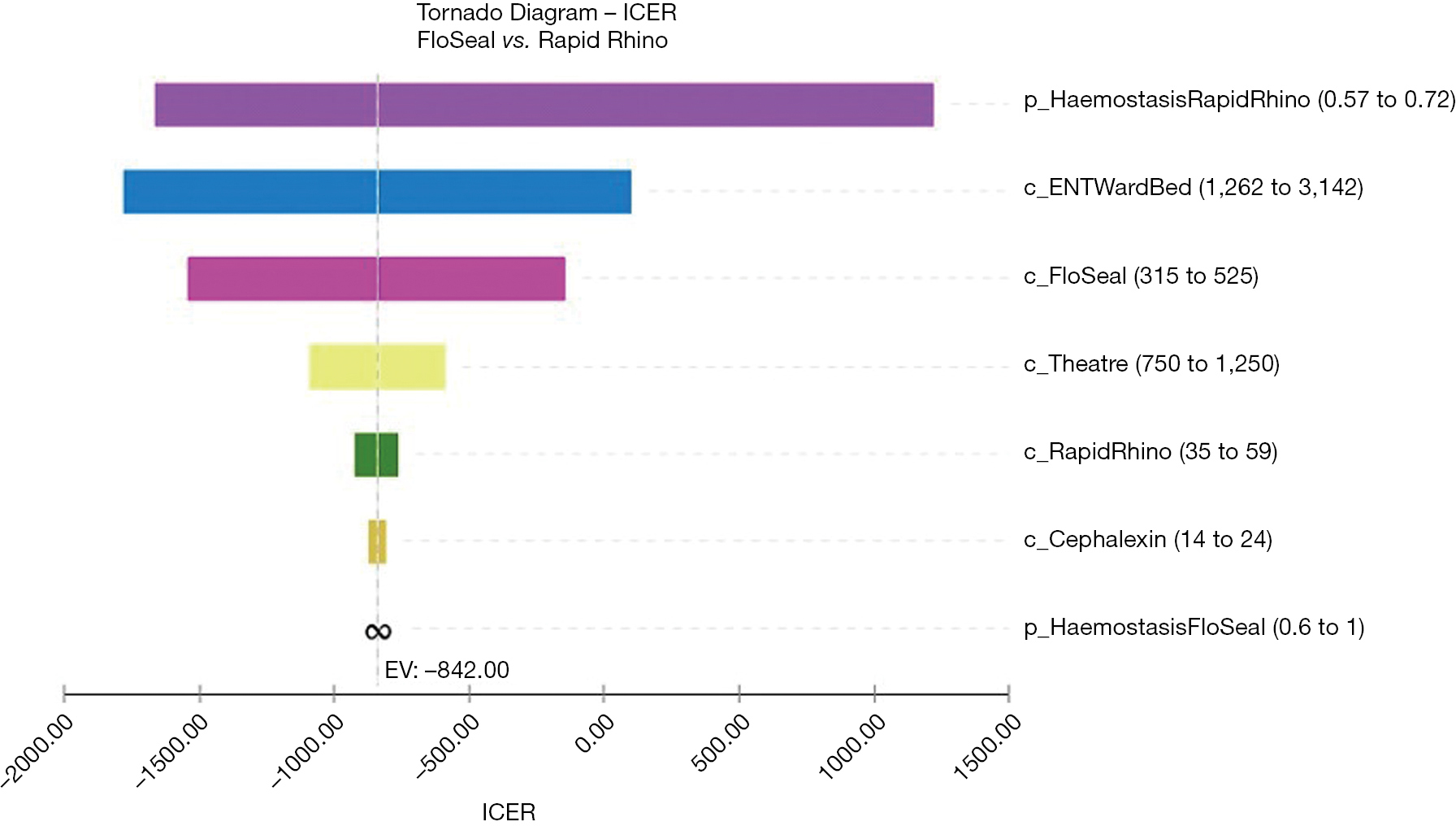 Figure 3 is a scatterplot on the cost-effectiveness plane of 10,000 ICERs using probabilistic sensitivity analyses. It demonstrates that a substantial number of ICERs are in the cost-saving (i.e., South-East) quadrant. This was reinforced by the acceptability curve (Figure 4) showing that the gelatin-thrombin matrix had a higher probability of being cost-effective compared to Rapid Rhino. 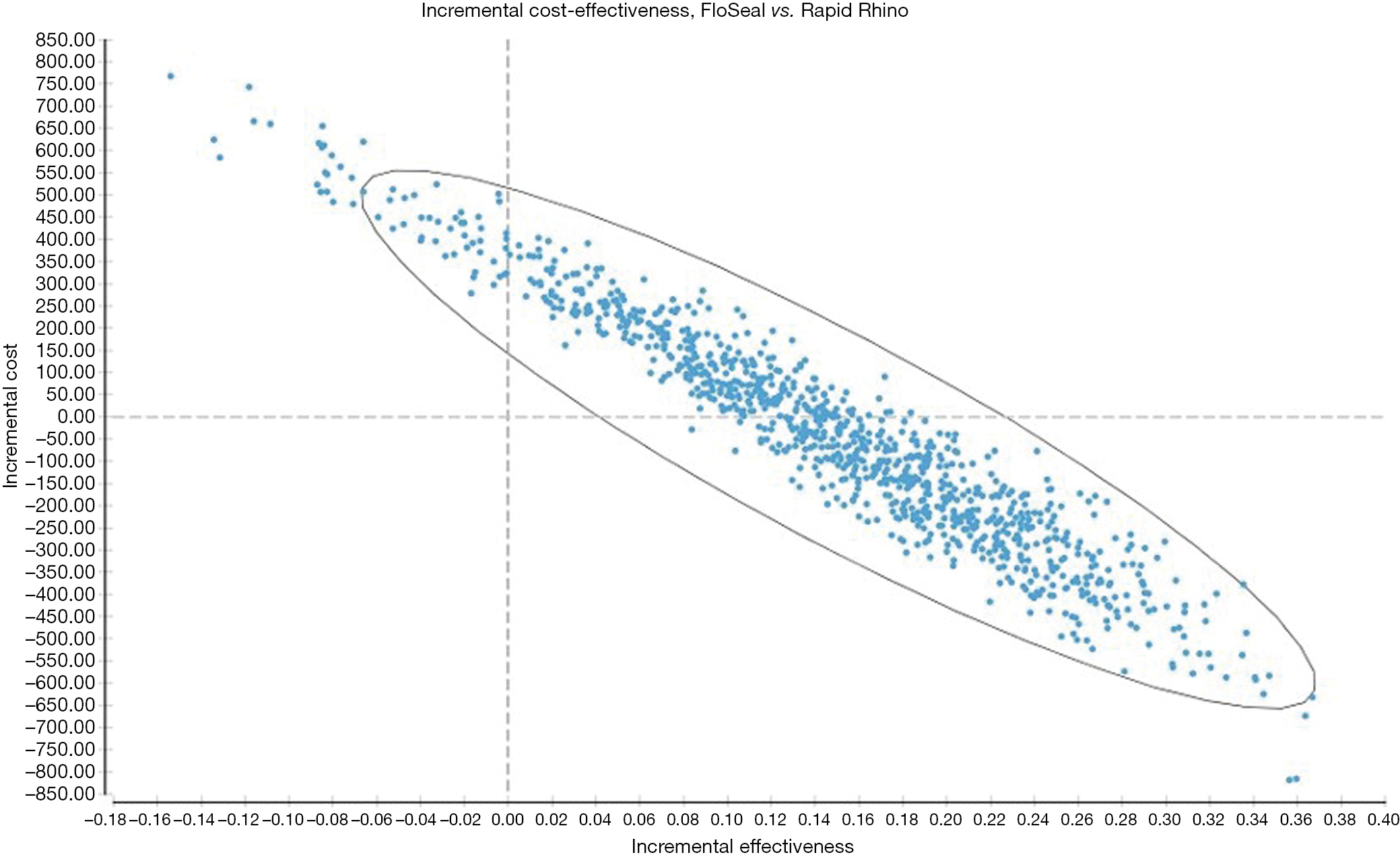 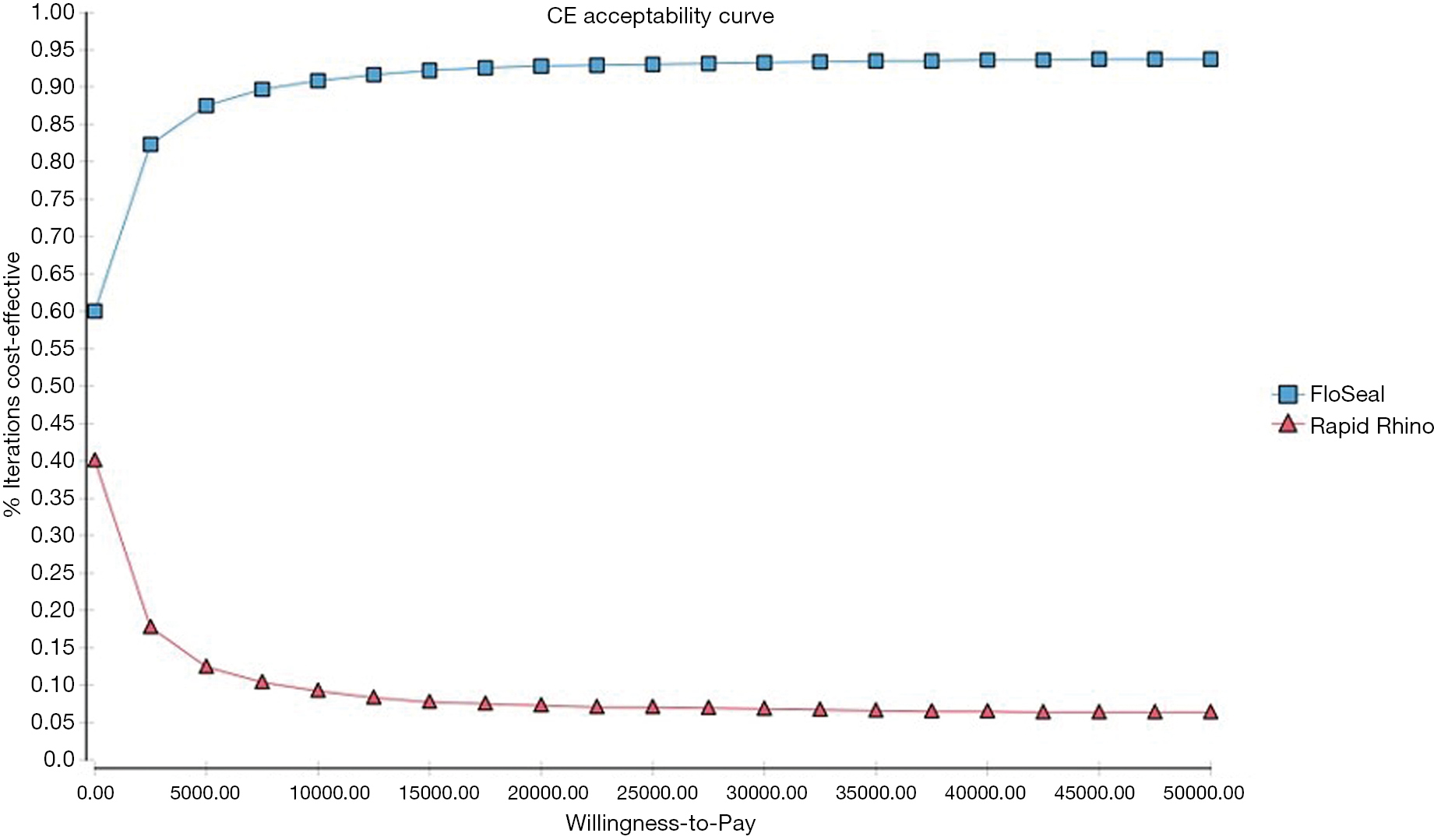 Whilst this study provided a comprehensive cost-analysis of two important treatment modalities for managing posterior epistaxis, there were several limitations. The costing data was obtained based on patients treated within a single health network in Victoria, Australia. Specific costs of hospital stay, and operative management may vary between hospitals and regions. Similarly, treatment protocols are not standardised across healthcare centres in Australia which may compound cost variances across sites depending on local practices.

Heterogeneity amongst patients with posterior epistaxis and the way in which different treatments were administered within the literature also represented another limitation. For example, Kilty et al. used a Foley catheter along with a gelatin-thrombin matrix to control epistaxis and in cases of initial failure would administer a second 5 mL syringe (11). This method of gelatin-thrombin matrix administration differed when compared to Cote et al., where nasendoscopy was used to identify a posterior bleeding point and apply the gelatin-thrombin matrix directly to the area (12). For the purposes of this cost study it was assumed only one 5 mL syringe of FloSeal would be used without the use of adjuncts such as a Foley catheter or nasendoscopy. Similarly, whether patients with non-dissolvable packs should be discharged home was another area of contention amongst published studies. Published guidelines suggest patients treated with haemostatic agents or dissolvable packs are safe to be discharged home (6). However, there is no clear consensus on whether patients managed with non-dissolvable packs are safe to be discharged, particularly in cases where posterior packing is required (28). Van Wyk et al. advocated that whilst it is reasonable to discharge patients with anterior packs in-situ, posterior packing should be performed only by a specialist trained in the procedure and warrants admission (28). Our institution has taken a similar approach whereby all patients requiring posterior nasal packing were managed as inpatients, thus this protocol was used in the cost-benefit modelling for this study.

Whilst both modalities appear to be at least comparable in terms of cost in the Australian setting there are several limitations to its use in the clinical setting. These include ease of access of gelatin-thrombin matrix (particularly on the ward and in the emergency department) and ease of use amongst emergency department physicians who may not have much experience with the product. Our experience with gelatin-thrombin matrix in the clinical setting is primarily limited to use intraoperatively, and even in this setting a learning curve exists in relation to competent and proper use of the product. Future research could thus focus on the practicalities of introducing gelatin-thrombin matrix as a treatment modality in the emergency department setting in Australian centres as well as prospective head-to-head trials to assess both products once implemented.

Conflicts of Interest: All authors have completed the ICMJE uniform disclosure form (available at http://dx.doi.org/10.21037/ajo.2020.03.06). The authors have no conflicts of interest to declare.

Ethical Statement: The authors are accountable for all aspects of the work in ensuring that questions related to the accuracy or integrity of any part of the work are appropriately investigated and resolved. This study was approved by the Eastern Health Ethics Committee (reference LR88/2016).

Open Access Statement: This is an Open Access article distributed in accordance with the Creative Commons Attribution-NonCommercial-NoDerivs 4.0 International License (CC BY-NC-ND 4.0), which permits the noncommercial replication and distribution of the article with the strict proviso that no changes or edits are made and the original work is properly cited (including links to both the formal publication through the relevant DOI and the license).See: https://creativecommons.org/licenses/by-nc-nd/4.0/.