The role of tonsillar actinomycosis in adult patients

Tonsillectomy is one of the most commonly performed surgical procedures. There are many indications for the surgery, and these vary for children and adults. Routine histological testing is done in adult tonsillectomy specimens in certain centres, however this may not be a viable option in resource limited centres (1). A common finding on the tonsillectomy histology is the presence of the bacteria actinomycosis.

The objective of the study was to establish the incidence of actinomycosis in the tonsils of adults undergoing tonsillectomy and to evaluate its role in clinical tonsillar disease.

We present the following article in accordance with the STROBE reporting checklist (available at http://dx.doi.org/10.21037/ajo-19-38).

Actinomycosis is caused by gram-positive, non-acid fast, anaerobic, branching, filamentous bacteria which result in chronic suppurative inflammation of the organs involved. The organism is a commensal in the human oral cavity (2). Actinomyces colonization of tonsillar crypts has been described in 7–35% of tonsillectomy specimens (3,4). Aydin et al. and Toh et al. found actinomycosis more common in adults than in children (5,6).

It has been suggested that tonsillar actinomycosis may be an aetiological factor in the development of tonsillar hypertrophy (5,6). This finding has not been consistent. A paediatric study by van Lierop et al. examined 344 tonsils and found no tissue reaction due to Actinomyces colonies and hence reported that there was no correlation between tonsillar actinomycosis and recurrent tonsillitis in their population (1). Melgarejo et al. found no statistical association between Actinomyces and recurrent adenotonsillitis or adenotonsillar hypertrophy (7).

The study was conducted in the clinical units of the University of the Witwatersrand’s Department of Otorhinolaryngology (ENT). The study was conducted in accordance with the Declaration of Helsinki (as revised in 2013). Ethics approval was obtained in March 2016 from the Human research ethics committee University of the Witwatersrand (registration number M151140) and individual consent for this retrospective analysis was waived.

The study population included all patients older than 18 years of age, who had a tonsillectomy performed. All patients undergoing tonsillectomies had histological analysis.

Inclusion criteria: all adult patients who had a tonsillectomy performed and for whom histopathological results were available on the National Health Laboratory Services (NHLS) database.

Patients were identified from the ENT Operating Theatre Register. The patient information was used to obtain the histopathology reports from the NHLS database.

The following details were recorded:

There were 638 specimen reports reviewed, comprising 319 patients. Actinomycosis was documented in 74 specimens.

The frequency of actinomycosis in the tonsils of adults undergoing tonsillectomy was 11.6% in our study population.

The reports revealed that reactive lymphoid hyperplasia was the most common (77%) condition encountered amongst our patients. The next most commonly described condition was actinomycosis which was documented in 74 (14%) specimens. 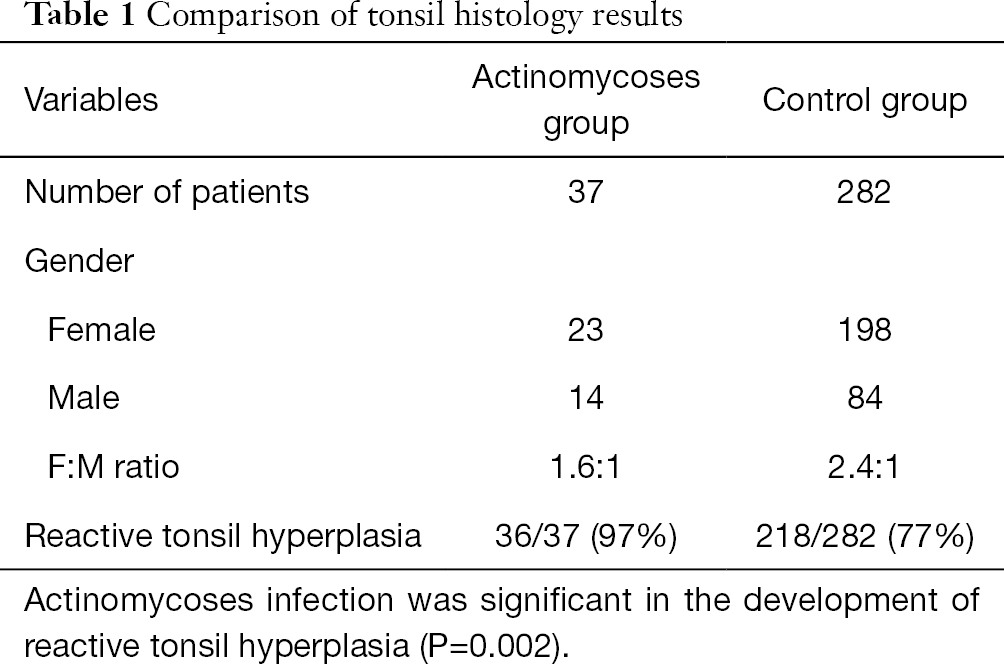 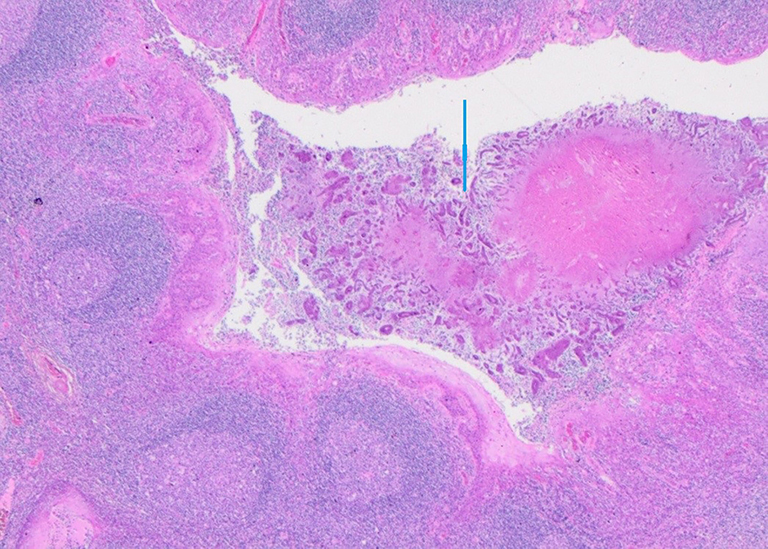 The presence of actinomycosis infection in tonsillectomy specimens is well described. The incidence is variable and ranges between 0.8% and 41% (8). In this study the incidence was 11.6%. The reasons for this variation include differences in the sectioning and staining techniques employed by different laboratories; the ages of the patients studied and discrepancies in the indications for tonsillectomy.

Hematoxylin & eosin (H&E) staining is useful in the detection of Actinomyces colonies. There are more sophisticated techniques including polymerase chase reaction-based oligonucleotide-deoxyribonucleic acid hybridization technique and Restriction fragment length polymorphism analysis of amplified small subunit ribosomal Ribonucleic acid genes which can improve the yield (9,10). In 1991 Pransky et al. suggested that core tissue analysis be used to assess tonsillar infection as this may be shielded from the effect of antimicrobials, and anaerobic organisms are more likely to survive in the oxygen depleted environment of the tonsillar crypts (11). They found that microbiological investigations are only successful in determining the presence of Actinomycetes in less than half of the cases; and that histological examination of the core tissues of the tonsils will more accurately detect the presence of these organisms (11).

Actinomyces are commonly found in the oral cavity where they are commensals. Their role in the development of tonsillar disease has not been firmly established. Numerous series have been published to try and establish the relationship between tonsillar actinomycosis and clinical tonsillar disease (6,9-13). In 1910 Lord isolated Actinomyces species from the tonsillar crypts and suggested that hypertrophy of the tonsils is the result of some toxin produced by the micro-organisms (12). This has however never been proven.

Ashraf et al. studied 204 patients who underwent tonsillectomies. In their study cohort indications were recurrent tonsillitis in 81% and obstructive sleep apnea (OSA) in 19%. They documented actinomycosis in 41% of their patients; with a higher incidence in their adult population. They surmised that Actinomyces colonization was more prevalent in patients with recurrent tonsillitis than in those with sleep disordered breathing. They concluded that the presence of Actinomyces does not indicate any active disease (8).

The frequency of actinomycosis in the tonsils of adults undergoing tonsillectomy was 11.6% in our study population. This is slightly higher than comparative studies.

Based on our study it can be said that when actinomycosis is present, there is almost always lymphoid hyperplasia as well, implying a commonality in the factors that underlie these conditions.

The authors would like to thank Dr. F. Mahomed for the histology picture (Figure 1).

Reporting Checklist: The authors have completed the STROBE reporting checklist. Available at http://dx.doi.org/10.21037/ajo-19-38

Conflicts of Interest: All authors have completed the ICMJE uniform disclosure form (available at http://dx.doi.org/10.21037/ajo-19-38). The authors have no conflicts of interest to declare.

Ethical Statement: The authors are accountable for all aspects of the work in ensuring that questions related to the accuracy or integrity of any part of the work are appropriately investigated and resolved. The study was conducted in accordance with the Declaration of Helsinki (as revised in 2013). Ethics approval was obtained in March 2016 from the Human research ethics committee University of the Witwatersrand (registration number M151140) and individual consent for this retrospective analysis was waived.