The use of the endoscopic ear surgery (EES) in otology was first described in the late 1990s (1,2). However, it was not until the early 2010s that interest in the technique began to grow globally, with corresponding increases in EES-related publications (3). The efficacy and safety of EES has been demonstrated by multiple authors (4-6). EES is particularly effective in addressing certain pathologies, such as tympanoplasty and cholesteatoma, primarily due to the greater degree of visualization afforded by the endoscope. Furthermore, the ability to avoid an external incision (endural or postauricular) offers patients superior cosmetic results.

Despite its advantages, the endoscope does present some shortcomings. The surgeon is typically reduced to one-handed operating as the non-dominant hand actively positions the endoscope. This can render certain situations more challenging, such as hemorrhage, or dissection of significantly scarred tissue. Secondly, there is a loss of three-dimensional depth perception with the endoscope. Thirdly, EES requires a considerable learning curve, which may make its adoption by adept microscopic surgeons difficult for logistical reasons.

Given the potential role of EES in the future of otology, we felt it is relevant to conduct a cross-sectional evaluation of EES usage patterns. The purpose of this study is to obtain an understanding of the attitudes towards EES in Australia, its pattern of usage in clinical practice, and any barriers that prevent its adoption. We present the following article in accordance with the STROBE reporting checklist (available at http://dx.doi.org/10.21037/ajo-19-78).

An electronic questionnaire (Google Forms) generated and vetted by the authors was distributed electronically to members of the Australian Society of Otolaryngology – Head & Neck Surgery (ASOHNS) (Appendix 1). Trainees were excluded from participating in the survey. Data was analyzed after a four-week collection phase. Reminders were sent to ASOHNS members at the second and fourth week. Participant consent was obtained to use the anonymized data for analysis. Depending on how participants answered with respect to EES use in their practice, different follow up questions were presented to the “EES surgeon” group vs. the “non-EES surgeon” group (see Appendix 1). An EES surgeon was defined as a surgeon who has performed at least one EES case in their practice. The survey explored further details in EES use in the “EES surgeon” group. In the “non-EES surgeon” group, questions explored possible barriers to adoption of EES. The survey included twelve questions and was designed to be completed in 10 minutes or less. Questions relating to attitudes towards EES were evaluated on a Likert scale (5-point scale with 1 representing “strongly disagree” and 5 representing “strongly agree”).

The study was conducted in accordance with the Declaration of Helsinki (as revised in 2013). The study was approved by the North Sydney Local Health District (NSLHD) Human Research Ethics Committee (HREC) (RESP/18/21) and informed consent was taken from all individual participants.

The survey was emailed to 452 members of the ASOHNS. Responses were obtained from 65 otolaryngologists, representing 14.4% of ASOHNS members. Most respondents were from New South Wales (n=20), followed by Queensland (n=13) and Victoria (n=11) (Figure 1). Duration of independent clinical practice varied widely, from as few as 2 years up to 50 years (mean 17.8 years). Most respondents (84.8%) pursued fellowship training. Eighteen (27.7%) respondents were fellowship-trained in otology/neurotology. The majority (75.4%) were involved in education of trainees. Forty-one (63.1%) reported otology as being a “significant part” of their practice. 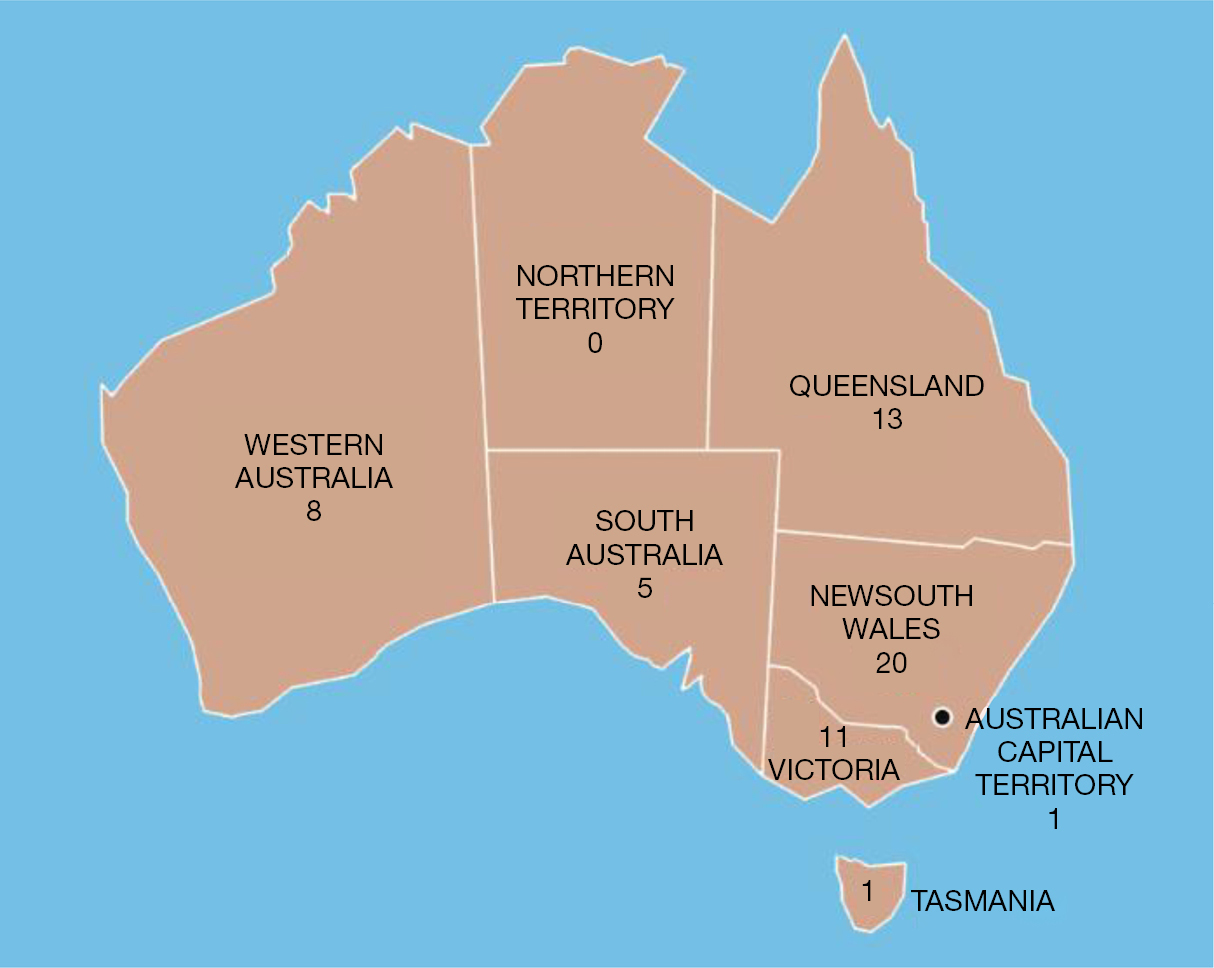 Participants were asked regarding use of EES in their clinical practice. The questions roughly mirror the Massachusetts EES grading scale (Tables 1,2). Based on their response, participants were grouped either as an “EES surgeon” or a “non-EES surgeon” (Table 3).

Table 2 Respondents were asked to choose the option which “best describes your use of the endoscope in ear surgery”. Responses were classified as either “non-EES surgeon” or “EES surgeon”
Full table 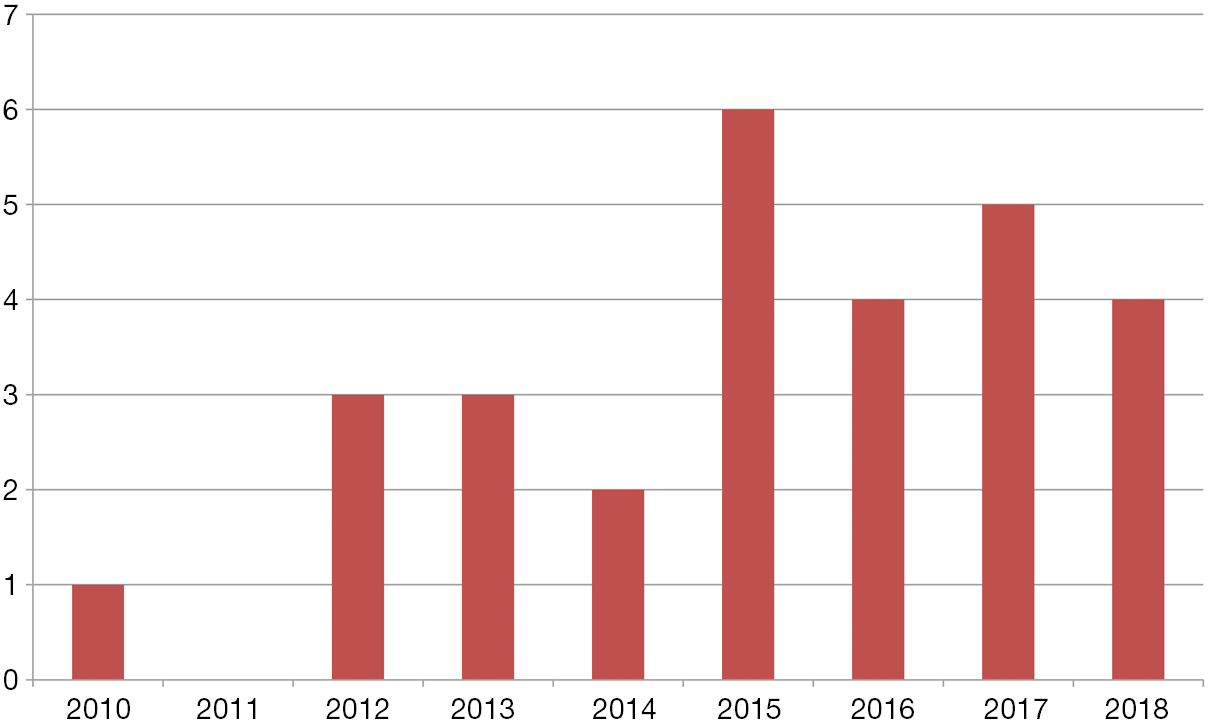 There were 37 respondents in this subgroup. Five (18.5%) respondents were otology-fellowship trained. Mean duration of clinical practice was 21.4 years. Although the endoscope was not used actively in intraoperative dissection, 17 (45.9%) use the endoscope intraoperatively for inspection as an adjunct to the microscope. In the outpatient setting, 15 (40.5%) use endoscopes for consultation (Table 2).

The most commonly cited reasons for not performing EES were “insufficient time to explore/learn EES” (14–37.8%), “the microscope is a sufficient instrument in otology” (13–35.1%), and “I don’t have the necessary equipment” (9–24.3%). Less common reasons included discouragement by the required learning curve, low-volume otology practice, and practice nearing retirement.

Respondents were asked to respond on a 5-point Likert scale (1, strongly disagree; 5, strongly agree) to questions regarding the utility and future of EES. EES surgeons were more likely than their non-EES counterparts to agree that the endoscope will be relevant in the future of otology (4.8 vs. 4.0 on Likert scale, P<0.001) (Figure 4). Both EES and non-EES surgeons tended to agree with the statement that the use of endoscopes provides a superior view of the middle ear compared to the microscope (4.3 vs. 3.9 on Likert scale, P=0.07) (Figure 5). EES surgeons also endorsed the statement that “the endoscope is an excellent tool to teach middle ear anatomy” with 21 of 28 (75%) strongly agreeing (mean 4.7). 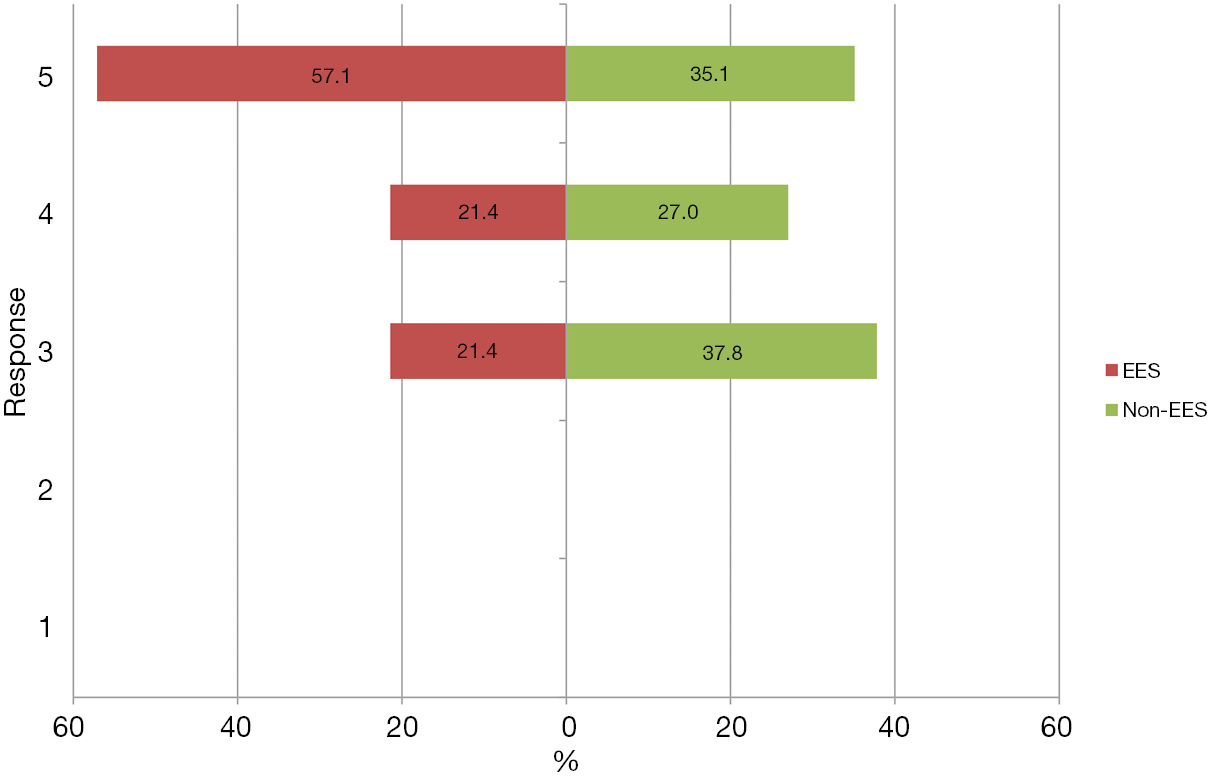 Figure 5 Comparison (%) between EES and non-EES surgeons for the statement: “The view of the middle ear is superior with the endoscope compared to the microscope”. P=0.07. EES, endoscopic ear surgery.

The non-EES surgeons reported mixed results when asked whether they planned to incorporate EES into their future practice, with 40.5% agreeing, 40.5% disagreeing, and 19.0% undecided.

Although early reports of endoscope-guided otologic surgery have been described since the turn of the millennium, the uptake of EES into mainstream otology has only rapidly progressed within the last decade (3). The adoption of the endoscope in otologic surgery has been likened to the introduction of the endoscope to sinus surgery in its potential to revolutionize the field. Naturally, the emergence of this new technology has also led some to caution against its rapid utilization before further study has been undertaken to validate its efficacy and safety (7,8). However, growing evidence of the EES literature has resulted in its use by otologists around the world. To date, there is no study looking at the use of EES in Australia.

The benefits of EES have been well described in literature. While the most obvious advantages include improved intraoperative visualization and avoidance of external scars, EES has also been shown to potentially further reduce residual disease in cholesteatoma when compared to microscopic surgery (9). The application of EES in cholesteatoma and tympanoplasty surgery has been well studied, and demonstrated to be safe and effective (5,10-13). This is echoed within the EES surgeon subgroup with both tympanoplasty and cholesteatoma being the most common surgical indications. EES was not routinely used in stapedotomy or lateral skull base surgery in this study. These indications represent more technically demanding surgery and would likely not be performed by lower-volume EES surgeons. In particular, the loss of depth perception can be challenging when performing footplate and/or prosthesis work, which requires considerable endoscopic experience to overcome (14). EES-assisted lateral skull base surgery has been described by subspecialty otology-referral centers (15,16) and falls out of the scope of the average EES surgeon.

There are several challenges to implementing EES into clinical practice. A significant difference was noted between EES vs. non-EES surgeons with respect to duration of practice. Non-EES surgeons were more likely to be further into their career compared to EES surgeons, who tended to be younger (13.0 vs. 21.4 years, P<0.01). This could be related to the younger consultants’ earlier and more frequent exposure to endoscopic techniques during training, such as endoscopic sinus surgery, thereby reducing the learning curve time required to become adept at EES. Prior studies have examined the impact of case volumes on EES proficiency, with reports of approximately 50 cases required to cross the transition from learning to proficient (17). For a lower-volume surgeon, it may be logistically challenging to commit 50 cases to learning a new technique. In addition to time commitment, one must also accept a possibility of reduced operative efficiency and potentially worse outcomes early on. Indeed, almost 40% of non-EES respondents identified a lack of time to learn as a major barrier to adoption of EES. To combat this, numerous EES courses have been offered around the world and are becoming increasingly popular. Interest to attend an EES course was frequently expressed within the non-EES group. Comparatively, 78.6% of the EES surgeon group reported attending at least one EES course.

Another barrier to implementation cited was lack of appropriate instrumentation. However, the instruments found in a standard middle ear tray are often sufficient for relatively simpler EES cases, such as grommet insertion or underlay tympanoplasty (18). As experience is gained, advanced instruments that maximize the ability to dissect around corners become necessary. While 3 mm endoscopes are preferred, 4 mm sinus endoscopes can often fit into most external auditory canals. Surgeons wishing to start with EES often have sufficient instrumentation in their centers to tackle simple, appropriately selected cases. The interested reader is referred to other works detailing implementation of EES into practice (18,19).

The primary limitation of this study is the self-reported nature of the survey. Approximately 14% of ASOHNS members replied to the survey. Attempts were made to maximize response rate by keeping the questionnaire brief as well as sending multiple reminder notices to ASOHNS members. The response rate of this survey could relate to a response bias with those having an interest in otology being more likely to reply. We recognize the findings of this study would be difficult to generalize to the average otolaryngologist in Australia. Additionally, trainees were not included in the study, and comments cannot be made regarding the status of EES exposure in specialist training programs.

Overall, preliminary attitudes towards EES are generally positive in Australia. Both groups tended to agree that EES has a relevant role in the future of otology. Even in the non-EES group, the endoscope is frequently used in consultations (40.5%) and for inspection intraoperatively (45.9%). Importantly, within the EES subgroup, many respondents addressed the complementary roles of the endoscope and the microscope with the recognition that both are valuable tools possessing their respective strengths and weaknesses. Furthermore, there is a considerable proportion (40.5%) of current non-EES surgeons expressing interest in incorporating EES into their practice in the future.

This study represents the first of its kind to survey usage and attitudes towards EES in Australia. EES is being performed by some surgeons in Australia, but only five report performing high volume EES (>50 cases). Amongst those not performing EES, the endoscope was used frequently in both outpatient consultation as well as intraoperative inspection after microscopic dissection. The limited response rate precludes statements regarding the overall uptake of EES in Australia, but amongst respondents, overall attitudes towards EES seem to be welcoming with many surgeons recognizing its role in appropriately selected otology cases.

Reporting Checklist: The authors have completed the STROBE reporting checklist. Available at http://dx.doi.org/10.21037/ajo-19-78.

Ethical Statement: The authors are accountable for all aspects of the work in ensuring that questions related to the accuracy or integrity of any part of the work are appropriately investigated and resolved. The study was conducted in accordance with the Declaration of Helsinki (as revised in 2013). The study was approved by the North Sydney Local Health District (NSLHD) Human Research Ethics Committee (HREC) (RESP/18/21) and informed consent was taken from all individual participants.