Airway complications in a retrospective audit of 1,142 tonsillectomies: further evidence for safety of the laryngeal mask airway

Tonsillectomy is a commonly performed surgical procedure in both children and adults. Because airway access is shared by anaesthetist and surgeon, and because airway soiling with blood and other debris can occur, it presents unique risks for complications related to the airway and respiration throughout the peri-operative period. Controversy exists over how to best manage the airway during a tonsillectomy (1,2), with particular theoretical benefits attributable to both endotracheal intubation and use of the laryngeal mask airway (LMA) (3).

Both of these airway management methods have advantages and disadvantages. Endotracheal intubation may be more likely to cause airway irritation, leading to a greater risk of coughing, gagging, laryngospasm and stridor, although there are conflicting data on this outcome (4-7). On the other hand, the LMA provides less airway protection against aspiration, with blood and possibly gastric contents more likely to be aspirated, causing laryngospasm, airway obstruction or pneumonia.

Regular use of the LMA is common, with some institutions describing its use in >90% of cases (8). Airway management for tonsillectomy obviously depends on a range of patient factors, as well as anaesthetist and surgeon preference, however LMAs are widely used in our hospital. This study was conceived in an effort to enumerate the use of particular airway types, and the risk of airway complications, amongst patients in our hospital undergoing tonsillectomy.

We present the following article in accordance with the STROBE reporting checklist (available at http://dx.doi.org/10.21037/ajo-20-77).

Albury Wodonga Health (AWH) is a regional referral hospital on the New South Wales-Victoria border that serves a population of around 250,000. A comprehensive range of surgical services are offered by AWH, including an ear, nose and throat (ENT) surgery service that performs around 350 tonsillectomies per year.

The aim of this research was to establish the rate of use of particular airway types during tonsillectomies, and to examine the rate of airway and respiratory complications in this cohort of patients. A key question was the rate of LMA failure where LMA failure was defined as a requirement for the anaesthetist to abandon the LMA in favour of endotracheal intubation for any reason.

The study was conducted in accordance with the Declaration of Helsinki (as revised in 2013). Individual consent for this retrospective analysis was waived. Following ethics committee approval (Albury Wodonga Human Research Ethics Committee, reference number LNR57-2-2018), a convenience sample of all patients who had undergone tonsillectomy at the Albury campus of AWH from 2014–2017 were identified retrospectively from coding data collated by the Health Information Department. Patients who underwent additional procedures with tonsillectomy (e.g., adenoidectomy, myringotomy) were included, although patients undergoing adenoidectomy alone or more extensive pharyngeal or head and neck surgery (e.g., uvulopalatopharyngoplasty, tonsillectomy with neck dissection) were excluded. Medical records were examined in detail to establish demographic and clinical data including indication for surgery, selected co-morbidities, anaesthesia data and clinical events in the post-anaesthesia care unit (PACU) and ward.

Tonsillectomy was performed predominantly by two surgeons using dissection and/or cautery. Occasional locum surgeons’ cases were included. AWH also has an ENT registrar who regularly performs tonsillectomy under supervision. Surgeon identity and technique were not specifically collated as variables, although all surgeons used a Boyle-Davis gag.

Anaesthesia was provided by a core group of eight regular ENT anaesthetists, although cover by other anaesthetists does occur; identities of specific anaesthetists were not collected.

Specific complications were LMA failure with endotracheal tube (ETT) insertion, laryngospasm, bronchospasm, coughing intra- or post-operatively, post-operative apnoea, oxygen desaturation (<95% for >1 min) intra-operatively, in PACU or on the post-operative ward, stridor, or need for anaesthetist intervention in PACU or on the ward. Missing data were recorded as such. It was appreciated that recording of complications may have been incomplete in some cases, with a small risk of introducing bias. Data were collected from available information and individual patients or practitioners were not contacted to clarify any missing information.

Descriptive statistics were used for demographic variables. Logistic regression was used to establish odds ratios for the relationship between selected variables and the risk of LMA failure or of any complication. Statistical analyses were performed using Stata version 16 (StataCorp, College Station, Texas, USA). Graphs were created in Microsoft Excel 2013. 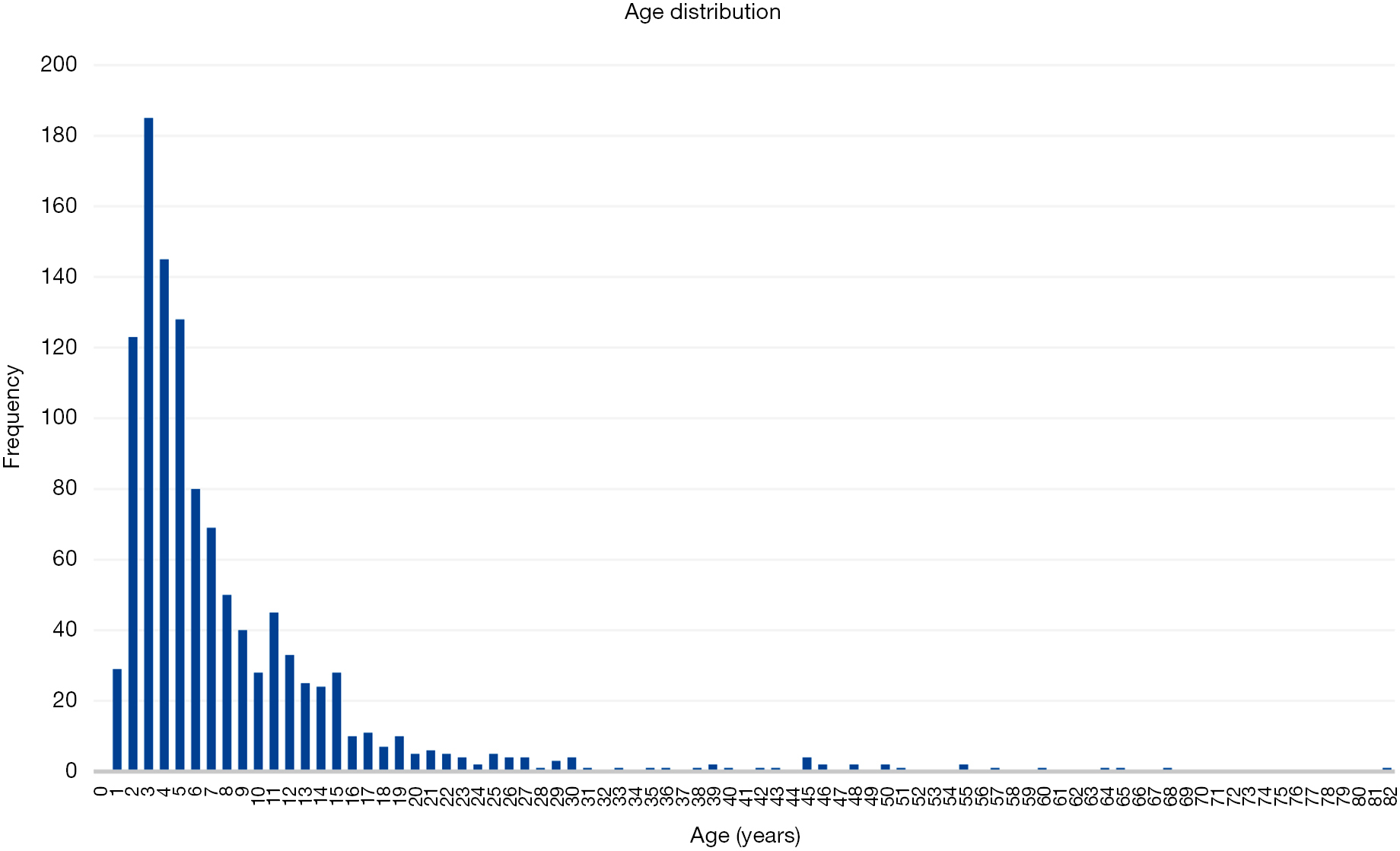 Figure 1 Frequency histogram of age distribution in the cohort. 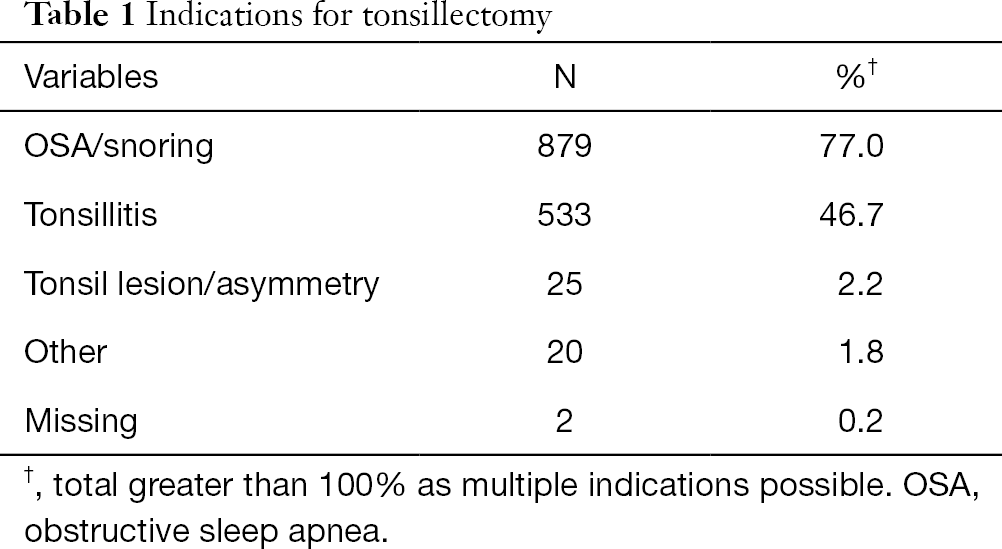 Premedication was administered to 82.7% (n=945) of subjects, predominantly paracetamol alone 75.7% (n=865), with the others comprising various combinations of paracetamol, midazolam, ranitidine, pregabalin and salbutamol. Anaesthesia induction was inhalational for 869 (76.1%) subjects. Maintenance of anaesthesia was inhalational for 1,106 (96.8%) of subjects. Mean procedure duration was 46 minutes. Airways were removed in PACU in around two-thirds of cases (n=752, 65.8%) and theatre in the other one third (n=365, 32.0%). Length of stay was one night in 96.8% of cases.

In 1,090 cases (95.4%), a reinforced LMA was utilised without recorded difficulty or complication. In thirty-one cases (2.7%), the primary airway was an ETT and in 16 (1.4%) a LMA failed and required replacement with an ETT. The predominant cause of LMA failure was airway obstruction at the time of insertion of the Boyle-Davis gag (Table 2). 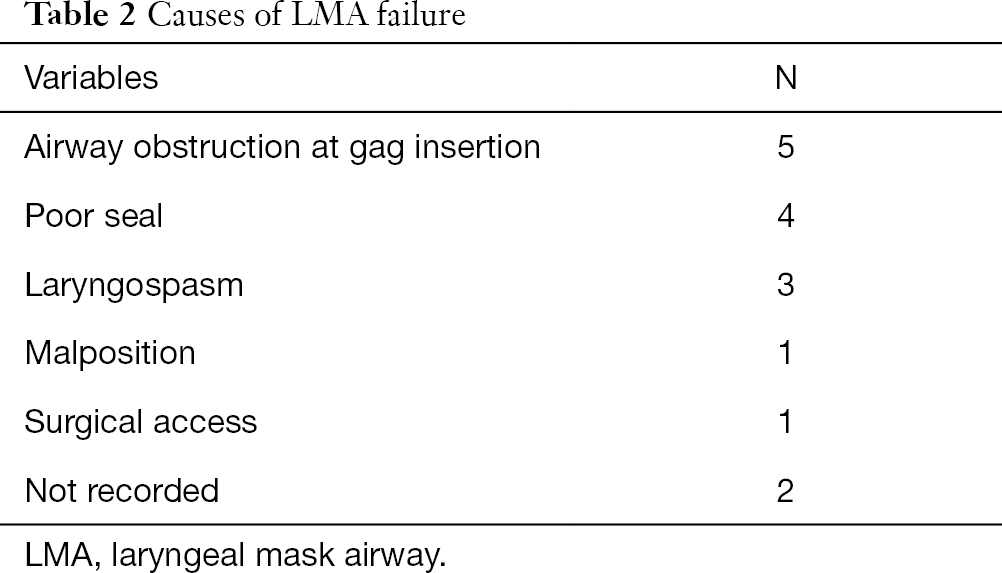 In addition to LMA failure, other airway and respiratory complications for which data were collected are outlined in Table 3. The vast majority of patients had no recorded complications (982, 86.0%).

Figure 2 Number of subjects and number of complications, by age.

Cases of laryngospasm were examined in some detail and were found to have occurred in both the operating theatre (9 cases) and the PACU (6 cases). Management of laryngospasm consisted of face mask/positive pressure ventilation (6 cases), muscle relaxant administration (5 cases), endotracheal intubation (4 cases) and propofol (3 cases). One further case was noted in which surgery was abandoned after an episode of laryngospasm on induction that was treated with propofol. This case was not specifically identified in our cohort as tonsillectomy was not performed.

Logistic regression revealed that intercurrent respiratory tract infection increased the odds of any complication (Table 4). Other variables such as age, sex, history of snoring, presence of obstructive sleep apnoea and type of airway used had no effect on the odds of a complication.

This series represents a large cohort of subjects undergoing tonsillectomy in whom a LMA has been satisfactorily used in the vast majority. The incidence of conversion from LMA to ETT is comparable to, and in many cases lower than, rates reported by other authors. Higher rates were reported by Lalwani et al. (9), who conducted a similar retrospective study to ours in children undergoing adenoidectomy or adenotonsillectomy. Their LMA failure rate was 6.8%, although they did include subjects undergoing adenoidectomy alone, and this was associated with a lower odds of LMA failure, suggesting that the rate of LMA failure in tonsillectomy patients is likely to have been higher again. Gravningsbråten et al. reported a prospective series of 1,126 children undergoing tonsillectomy or adenoidectomy with a LMA (10). In their tonsillectomy cohort, LMA abandonment in favour of an ETT occurred in 4 out of 589 cases (0.7%).

Several small randomised controlled trials comparing LMA and ETT in the setting of tonsillectomy (and in some studies adenoidectomy as well) have been performed, comparing a variety of outcomes including LMA failure and a range of airway complications (4-7,11-13). The range of LMA failure requiring intubation reported in the LMA groups of these trials varies from 0% to 20%. Reasons for LMA failure cited in these studies include various types of mechanical problems with positioning of the LMA (unable to place correctly, tube kinking, gas leak around the mask), laryngospasm, bronchospasm, aspiration and inadequate surgical access. The importance of sufficient depth of anaesthesia when the tonsil gag is placed and opened has been stressed (14); we did not assess depth of anaesthesia specifically in our cohort.

Complications other than LMA failure have been described in previous studies, and many have found similar rates to ours. Amongst 140 children undergoing routine ENT procedures, Parry et al. found an incidence of laryngospasm of 2.5% and coughing of 5% (15). Lalwani et al. (9), in contrast to our findings, noted an increase in overall complications in their LMA group over their ETT group.

Cooperation between surgeon and anaesthetist is paramount in ensuring the success of LMA use in the setting of tonsillectomy. The anaesthetist must be aware of critical times for LMA failure, such as gag placement, and the surgeon must be comfortable with the altered access that a LMA offers. These issues have been discussed in the literature and letters to the editor at some length (7,16-19). Younger age may be a factor affecting the incidence of airway complications with LMA use (20).

Strengths of our study include the cohort size, the consistency of the clinical care environment (a small number of surgeons and anaesthetists) and the small number of missing data.

The retrospective nature of our data collection is an important limitation. Potential problems with identification of cases and absence of information if not recorded accurately in the medical record, particularly of minor clinical events such as brief episodes of stridor or desaturation, may clearly have influenced our results. We included all patients from our hospital that had had tonsillectomy over the four-year timeframe of the study so that our sample was representative of our population of patients. Selection bias could have influenced the fact that the odds of a complication were higher in the group receiving an ETT primarily, compared to those receiving an LMA. Higher risk patients may well have been intubated for reasons that contributed to this difference (e.g., regurgitation risk). It is interesting to note that regurgitation and aspiration were not recorded in our cohort at all. It is possible that these events did not occur, that high-risk patients were pre-selected for intubation, or that documentation of minor degrees of these phenomena was incomplete. The generalisability of our findings are dependent on the preferences of surgeons and anaesthetists but with appropriate patient selection and careful communication we believe our results could be reproduced in other units.

We believe that our data contribute to the body of evidence confirming the safety of the LMA in the setting of tonsillectomy. Whilst a number of authors have reported frequent use of the LMA for tonsillectomy in particular centres (7,18), a French survey of airway management for tonsillectomy revealed infrequent use in this setting (2%) (21), whilst a survey of British anaesthetists in 2007 revealed a greater than 70% use of ETT for airway management during tonsillectomy in all age groups, and 87% in the <3-year age group (22). An earlier British survey showed a similar low routine rate of use of the LMA (16%) (23). Nevertheless, a more recent literature review has suggested the LMA as an equivalent first-line airway to the ETT (24). We believe our findings confirm the use of the LMA as a practical and safe technique in tonsillectomy.

Reporting Checklist: The authors have completed the STROBE reporting checklist. Available at http://dx.doi.org/10.21037/ajo-20-77

Conflicts of Interest: All authors have completed the ICMJE uniform disclosure form (available at http://dx.doi.org/10.21037/ajo-20-77). The authors have no conflicts of interest to declare.

Ethical Statement: The authors are accountable for all aspects of the work in ensuring that questions related to the accuracy or integrity of any part of the work are appropriately investigated and resolved. The study was conducted in accordance with the Declaration of Helsinki (as revised in 2013). The study was approved by the Albury Wodonga Human Research Ethics Committee (reference number LNR57-2-2018) and individual consent for this retrospective analysis was waived.