Inhalation and ingestion of foreign bodies are common emergency presentations in paediatric otolaryngology. The common foreign bodies involved are organic substances such as nuts, seeds and vegetable. However, in the last decade or so, there has been a rising number of cases of magnetic foreign body ingestion and inhalation, due to the increasing use of small fridge magnets and magnetic toys (1,2). Statistics from the United States National Electronic Injury Surveillance System reported an estimated total of 14,586 suspected magnet ingestion presentations between 2010 and 2015, with the peak incidence in year 2012 at 3,167 (3). Monash University Accident Research Centre reported 39 cases of children who presented to Victorian hospital emergency departments following ingestion of magnets over the period 2004 to 2008 (4). Here we present the first reported case of a 21-month-old toddler who simultaneously inhaled and ingested two magnetic ball-bearings. We discuss the diagnostic dilemma encountered and the subsequent management of this case. The following case report is written in accordance with the CARE reporting checklist (available at http://dx.doi.org/10.21037/ajo-20-67).

A 21-month-old presented to their local doctor with a 2-month history of worsening intermittent dry to wet cough. There were no associated symptoms of respiratory distress or feeding difficulties. Three weeks prior, the local doctor had advised via telehealth review that the symptoms were most likely viral in nature. However, due to persisting symptoms, the toddler was brought back by their concerned parent and a chest X-ray was obtained, which revealed an incidental finding of two radio-opaque foreign bodies in the region of the left main bronchus, with a hyper-inflated left lung and tracheal deviation to the right (Figure 1). The toddler was therefore transferred to our facility for further assessment. Upon clarification with the parent, a history of a possible choking event was elicited, whereby the child was chewing on a magnetic toy and began coughing, but settled following a vomit so the parent thought no more of it.

Figure 1 Anteroposterior view of chest radiograph showing the magnets sitting in the region of the left main bronchus. There is mediastinal shift towards the right and hyperinflation of the left lung.

On examination, the toddler was afebrile, with a respiratory rate of 42 brpm, saturating at 97% in room air and heart rate of 142 bpm. The toddler appeared well, with no symptoms of drooling nor stridor. There was widespread poor air entry of bilateral lungs. Cardiovascular and abdominal examinations were within normal limits. White cell count was elevated at 14.4×109/L but neutrophil and lymphocyte counts were normal at 5.31×109/L and 6.68×109/L, respectively. The C-reactive protein level was also unremarkable at 5 mg/L.

An attempt at endoscopic removal of foreign bodies was made. Laryngoscopy, bronchoscopy and oesophagoscopy (LBO) found a significant mass of granulation tissue obstructing the proximal left main bronchus resulting in complete occlusion (Figure 2). There was induration but no foreign bodies visualised in the oesophagus. The granulation tissue was extremely friable and bled profusely on minimal contact. The procedure was abandoned and an urgent computed tomography (CT) of the chest was obtained. The CT revealed two metallic foreign bodies, the exact location of which was difficult to identify due to extensive streak artefacts, with associated collapse of the left upper lobe (Figure 3). There was, however, a possibility that one foreign body was in the left main bronchus, the second was in either the oesophagus or mediastinum and both were adhered to each other. The toddler was kept monitored in the intensive care unit for 24 hours and given high-dose intravenous dexamethasone and antibiotics prior to re-attempt at retrieval. Given the unclear location of the magnets and close proximity of a potential fistula to the carina, median sternotomy with cardiopulmonary bypass was planned for retrieval and reconstruction if endoscopic retrieval failed. The toddler was taken to the cardiothoracic operating theatres. Repeat LBO successfully retrieved two magnetic ball-bearings measuring 6 mm in diameter each. The first was found in the left main bronchus surrounded by granulation tissue and retrieved with optical forceps (Figure 4). The second was found in the oesophagus after retrieval of the first ball-bearing; it attached itself to the oesophagoscope and was easily removed (Figure 5). The depth was estimated to be approximately 17 cm from the teeth. There was associated ulceration of the oesophageal wall following removal, raising suspicions of a possible perforation (Figure 6). A subsequent barium swallow study 3 days later did not reveal any leak. The toddler was restarted on oral feeds and monitored for a week before a repeat LBO which showed a completely healed oesophageal mucosa and bronchial wall (Figures 7,8). The toddler was then discharged home into the care of a very relieved parent. A follow-up phone call was conducted with the mother a month following discharge; she reports the toddler has been doing well at home, with no recurrence of symptoms. The toy in question has been disposed of. 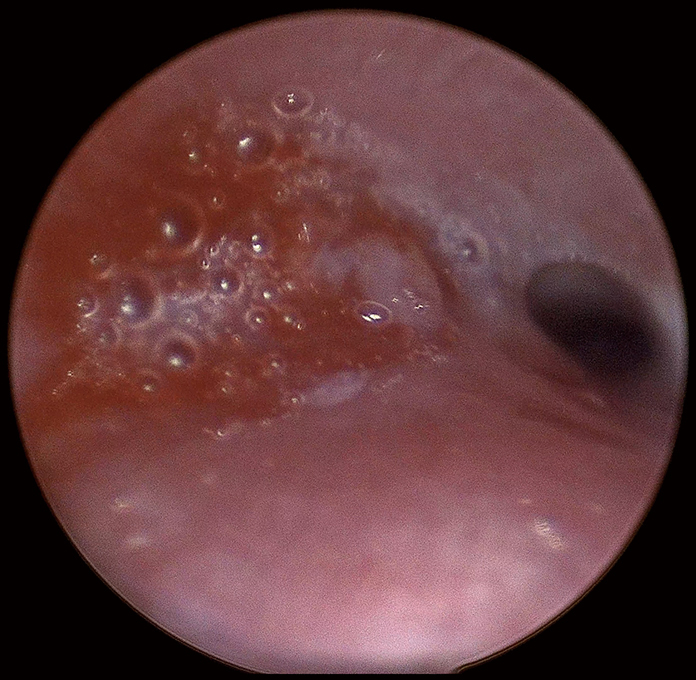 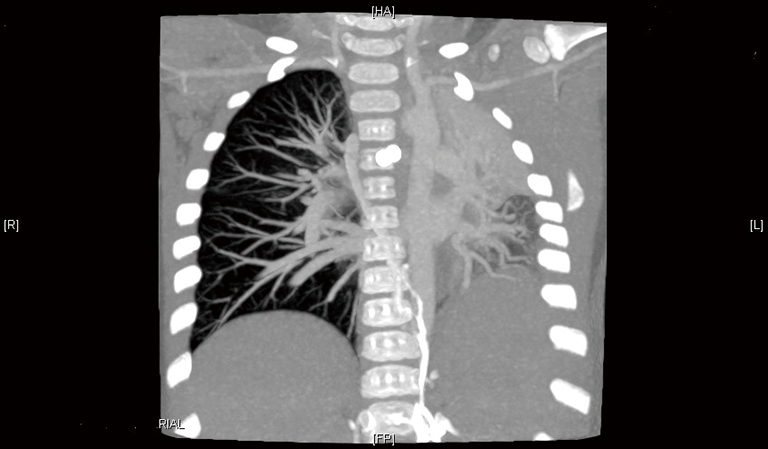 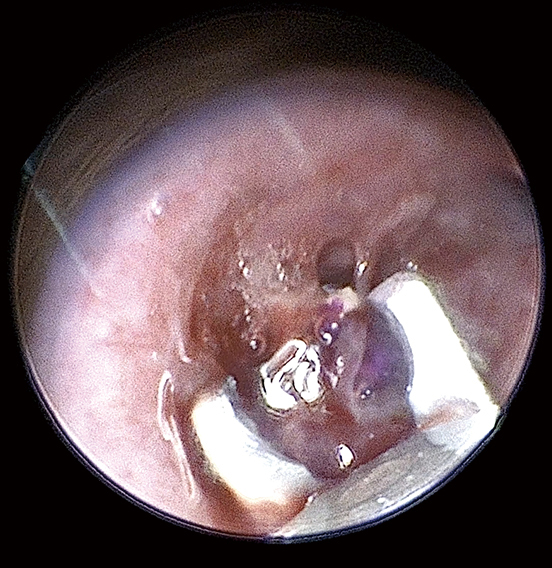 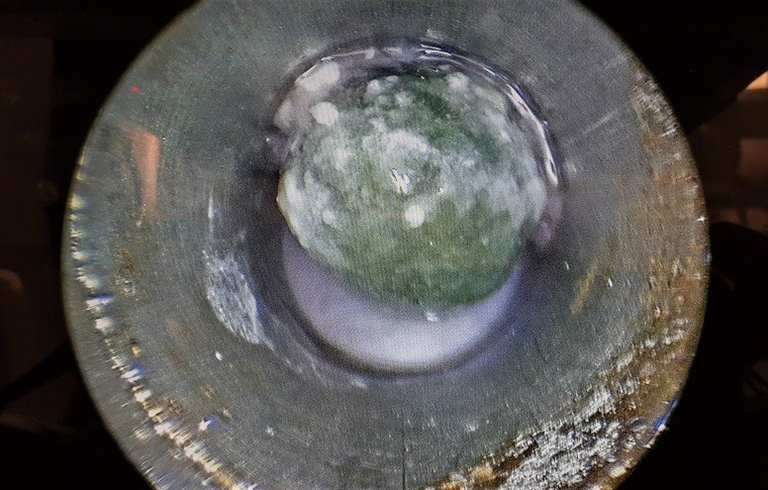 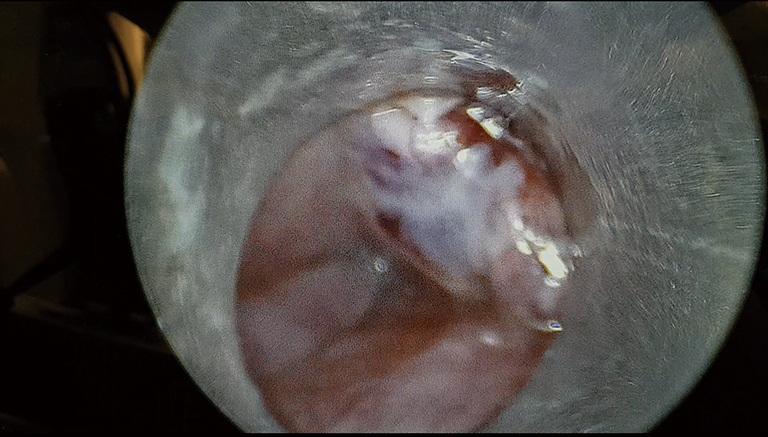 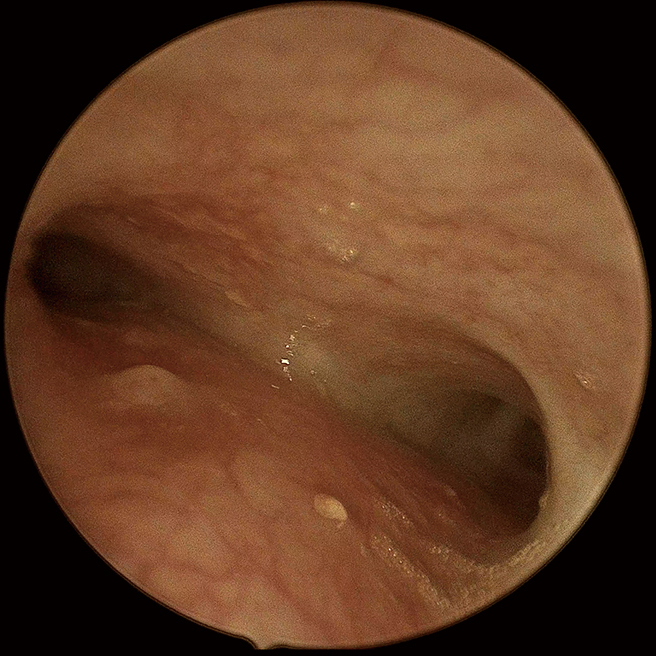 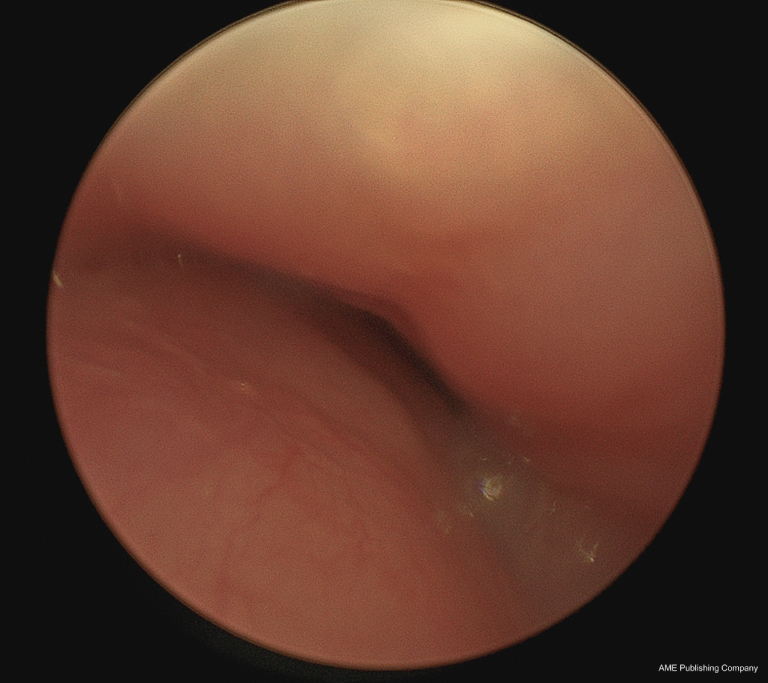 The study was conducted in accordance with the Declaration of Helsinki (as revised in 2013). The patient’s legal guardian (i.e., mother) has consented for case report and publication of the case.

Foreign body ingestion and inhalation are extremely common in children due to their oral sensory seeking behaviour. Much less common, however, is when foreign bodies enter both the respiratory and gastrointestinal tracts at the same time through sheer coincidence. We speculate that when the choking incident occurred; one ball-bearing fell down the trachea, one down the oesophagus, and they had been magnetised to each other. The ball-bearing in the oesophagus had eroded into the submucosa, hidden from view during the initial LBO. Once the ball-bearing in the bronchus was removed, the oesophageal ball-bearing became demagnetised from the submucosa and dislodged itself into the oesophageal lumen.

Neck and chest radiographs in anteroposterior and lateral views are the initial imaging modality of choice for patients with suspected magnet inhalation and/or ingestion. Not only can they reveal the location and quantity of the foreign bodies, they may also capture the consequences of airway obstruction and predict its likely mechanism, as described by Chatterji et al. (12). The first mechanism is known as the check-valve obstruction, whereby inhaled air cannot be expelled on exhalation. Plain films will demonstrate ipsilateral hyperinflation of lungs of the affected side and mediastinal shift towards the unaffected side. The second mechanism is the stop-valve obstruction which occurs both during inspiration and expiration. There would be collapse and consolidation of the affected lung segment. The third mechanism is the ball-valve obstruction, which occurs when the foreign body causes full obstruction during inhalation but is dislodged by passage of air during exhalation. There would be atelectasis and associated mediastinal shift towards the affected side. Finally, the by-pass valve type occurs when there is partial obstruction throughout respiration. This would show as generalised reduced air entry of lung fields (5,12). In our case, the toddler demonstrated both check-valve and stop-valve types of obstruction (Figures 1,4). CT scans can also be obtained to gain a three-dimensional view of the location of foreign bodies especially when a diagnostic dilemma is present (13).

Magnets have the potential to attract across mucosal walls causing ulceration, perforation, fistula formation, volvulus, pressure necrosis of bowel and death (14-16). A child in New South Wales required surgery for bowel obstruction and perforation in 2006. Mater Hospital in Queensland also reported 3 children who required surgery for bowel perforations secondary to magnet ingestions in 2009 (4). Following the death of a toddler in 2011, a national ban on small high powered magnets used as toys or in toys was introduced (Consumer Protection Notice No. 5 of 2012). Under this ban, products that are unsafe should be reported to the Australian Competition and Consumer Commission (ACCC) for investigation and potential product recall. Indeed, there had been a number of product recalls following this ban. However, despite the national ban, consumers are still able to purchase magnetic toys via online retailers and private sellers. Moreover, the ban does not apply to small high powered magnets used in household goods or for teaching purposes in educational settings (17).

All magnets in the airway must be removed endoscopically. As for magnet ingestions, if the quantity is more than one and within endoscopic reach, endoscopic removal is mandatory to prevent complications as previously mentioned. Surgical consultation is indicated if the magnets have progressed beyond endoscopic reach. For single magnet ingestions past the stomach with no other metallic foreign body ingestions, the patient can be managed conservatively with serial X-rays and bowel regimen medications (5,18,19). In this unique case, multi-disciplinary management between paediatric otolaryngology, general and cardiothoracic surgeons was needed given the precarious location of the magnets. Median sternotomy would be the preferred route for open repair should there be any thoracic injury during retrieval of foreign bodies, as it has a lower morbidity and reduced hospitalisation compared to left thoracotomy (20).

Inhalation and ingestion of magnets pose a significant danger with the potential to cause airway obstruction and damage to airway and bowel mucosa. This case illustrates the need for prompt action and a high index of suspicion for foreign body inhalation and ingestion in patients with prolonged unexplained respiratory symptoms and no resolution with standard treatment. It also highlights the need for increased public awareness regarding the dangers of magnetic toys as well as tighter regulation of online sales of these products.

The authors would like to thank Dr. Peter Grant, Dr. Bruce Currie and their teams for providing cardiothoracic and general surgical support during the process of retrieval of foreign bodies.

Reporting Checklist: The authors have completed the CARE reporting checklist. Available at http://dx.doi.org/10.21037/ajo-20-67

Conflicts of Interest: All authors have completed the ICMJE uniform disclosure form (available at http://dx.doi.org/10.21037/ajo-20-67). The authors have no conflicts of interest to declare.

Ethical Statement: The authors are accountable for all aspects of the work in ensuring that questions related to the accuracy or integrity of any part of the work are appropriately investigated and resolved. The study was conducted in accordance with the Declaration of Helsinki (as revised in 2013). The patient’s legal guardian (i.e., mother) has consented for case report and publication of the case.