Adenotonsillar hypertrophy is commonly associated with sleep disordered breathing (SDB) with the peak of symptoms between the ages of 3 and 6 (1). Surgery in the form of adenoidectomy with or without tonsillectomy is the current gold standard treatment in this population when their presentation is accompanied by airway obstruction (2). In Australia alone, between 2012–2013, a total of 38,575 tonsillectomies were performed in the paediatric population (3). Whilst the aetiology of adenotonsillar hypertrophy is poorly understood, several hypotheses include allergic disorders, lymphoproliferative disorders, apoptosis, and formation of biofilms with recurrent infections like tonsillitis (4). Nonetheless, none of these are conclusive (4).

SDB encompasses a range of disorders, from primary snoring to severe obstructive sleep apnoea syndrome (5). SDB has significant implications on the paediatric population and has been associated with cardiovascular complications, growth disorders and behavioural problems, such as aggression, hyperactivity, attention-deficit disorder and poor socialisation (6,7). SDB also has implications on neurocognitive functions, such as memory, learning and problem solving ability, are reduced in children with SDB (8). Additionally, Patients with SDB are at increased risk of restless leg syndrome, another paediatric condition associated with iron deficiency (9).

While the role of iron is not definitive in SDB and adenotonsillar hypertrophy, it is known that iron plays an important role in immunity, growth, haematopoiesis and cognitive development (10). Iron deficiency is relatively common with the World Health Organisation estimating a prevalence of 8% of Australian children under the age of 5 and is diagnosed with a serum ferritin level of <20 µg/L (11). This is similar to the United States with a reported prevalence of 7% of children under 5 being iron deficient (9). The presenting symptoms of iron deficiency are varied and widespread. Interestingly, these symptoms are similar to the symptoms children with SDB experience. These include from restless sleep, daytime somnolence and poor attention span (12). In addition, there has been an association between iron deficiency and impaired cognitive function and sleep (13,14). Neurotransmitters affected by iron (dopamine, epinephrine, and serotonin) have been linked to memory, learning, motor control and sleep dysfunction (15). The negative effects of iron deficiency on brain development can be observed later on in life despite having the iron deficiency corrected (16,17).

Furthermore, due to the essential role iron plays in the production of immune cells in the bone marrow, iron deficiency has been associated with dampened function of primary lymphoid organs and thus an increased susceptibility to infection (18). Particularly investigated is the recurrence in paediatric acute respiratory tract infections and gastroenteritis where a correction in iron levels has shown to reduce the rates of these conditions (10). In the pediatric population with coexisting iron deficiency and adenotonsillar hypertrophy, we hypothesise that iron deficiency leading to reduced immunity may result in chronic inflammation and thus adenotonsillar hypertrophy. In specific adult populations, studies suggest iron supplementation reduces the incidence of SDB (4).

We present the following article in accordance with the STROBE reporting checklist (available at http://dx.doi.org/10.21037/ajo-20-89).

Ethical approval was obtained via institutional Human Research Ethics Committee (reference number 1671) and all patients provided informed consent. The study was conducted in accordance with the Declaration of Helsinki (as revised in 2013). This study was a retrospective point prevalence cohort study across two centres in Western Australia. Participants were recruited between January 2018–September 2019.

The study population was defined as all children 16 years of age or under undergoing adenoidectomy, tonsillectomy or both for either SDB breathing or recurrent tonsillitis. A single surgeon performed all the operations across 2 centres, using the same surgical technique (coblation). A peri-operative blood sample was taken from the intravenous cannula used by the anaesthetist and sent for iron studies (iron, serum ferritin, transferrin and transferrin saturation). If there was sufficient blood from the fresh cannula, a full blood picture (FBP) was also performed.

Data recorded included patient demographics, date and surgical procedure, indication for surgery, iron study results and haemoglobin level. The data was analysed by separate authors to those who performed the operation or collected the data. Key exclusion criteria were based on age; if participants were over the age of 16 at the time of surgery, lack of peri-operative blood sampling; if no iron studies were available or alternative procedure; if the participant did not receive the surgery outlined above.

Participants were followed up 6–8 weeks post operatively as part of routine clinical practice post adenotonsillectomy. No further data was collected for the study during the follow up visit. Participants were made aware of the results of the blood test and if indicated, recommended oral iron supplementation therapy.

Participants were further divided based on age and diagnosis for subgroup analysis. Age categories were defined as: under 2-year-old, 2 to 6-year-old and over 6-year-old. These cut offs were based on previous literature, as well as physiological and clinical reasons such as growth spurts, surgical patterns and diet (4,11).

The median age at time of surgery was 4.8 years (standard deviation 3.2, interquartile range 4.2). Further characteristics of the study population are outlined in Table 2. 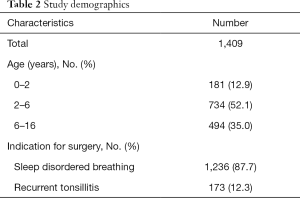 Our results have shown that the prevalence of iron deficiency in children undergoing surgery for adenotonsillar hypertrophy was significantly higher than the general population. The authors are confident that these results reflect the Australian population given the high number of participants in the study and the narrow 95% confidence interval. In fact, our finding of 33.9% prevalence of low ferritin is likely an underestimate of the total prevalence of iron deficiency in children with adenotonsillar hypertrophy. When evaluating children with a borderline iron deficiency result (ferritin of 20–60 µg/L), the RCPA suggest the use of transferrin saturations should be used to better evaluate iron status in this equivocal group (20). The criteria for borderline ferritin of 20–60 µg/L is a broad range and encompasses the majority of our participants. Part of the reason for the broad range is because ferritin is an acute phase reactant and can be elevated in certain conditions that cause co-existing inflammation, this potentially includes recurrent infections such as tonsillitis or upper respiratory tract infections. Thus, to accurately interpret iron levels in this borderline group, transferrin saturations were used in conjunction. Of the 857 participants with borderline ferritin, 316 (36.9%) had a concurrent low transferrin saturation suggestive of iron deficiency. With these 316 added to the initial 478 with iron deficiency based on low ferritin, our study suggests 56.4% of the study population is iron deficient. To further highlight the importance of the borderline ferritin group, the majority of anaemic patients undergoing surgery had a borderline, rather than a low ferritin level.

Age appears to correlate inversely with the frequency of iron deficiency. Our study had the highest rates of iron deficiency in the 0- to 2-year-old group and lowest in the 6- to 16-year-old. This finding replicates those of Kerstein et al., who, in their sample size of 94, also reported higher rates of iron deficiency in ages below 6-year-old and most marked in ages 0 to 2-year-old in children with either restless leg syndrome or periodic limb movement disorder (4). There are additional factors that have effect on iron levels in the less than 2-year-old group. It is well documented that term babies have enough iron stores to meet their requirements for the first four to six months, provided the mother has sufficient intake, but beyond this period the ongoing rapid growth phase and the new need for an iron rich diet explain the high prevalence of iron deficiency (11,12).

While there are multiple theories behind the aetiology of adenotonsillar hypertrophy, none are conclusive (4). The authors subscribe to the theory that adenotonsillar hypertrophy results from recurrent infections secondary to impaired immune function, which could be due to iron deficiency. In our study, no statistically significant difference was found between the rates of iron deficiency between the SDB and recurrent tonsillitis subgroups. This may suggest that iron deficiency plays a role in both conditions although the exact process remains unclear. This finding does not support previous findings of Somuk et al., who reported levels of iron and zinc were significantly lower in the recurrent tonsillitis group (24). However, their study differs in methodology by looking at the amount of iron in tonsillar tissue rather than serologically. Additionally, it was a significantly smaller study with a total of 40 participants. Another trial investigating the effect of adenotonsillectomy on haemoglobin and iron found that there was no difference in serum ferritin before and after the operation, suggesting that low iron may be related to the cause of adenotonsillar hypertrophy, rather than a consequence of it, which supports the study hypothesis (25).

There are recognised limitations to this study. Firstly, the study design is a cohort prevalence study and although it has a large number of participants, the results can only suggest a correlation between iron deficiency and adenotonsillar hypertrophy rather than causation. Future studies should explore the pathophysiology of adenotonsillar hypertrophy and the effect of iron on this process. An additional research question worth investigating is if iron replacement will benefit the symptoms of SDB or recurrent tonsillitis in this population.

Another limitation is the difference between the number of FBP obtained compared to iron studies. This is due to the issue with drawing sufficient blood for both iron studies and a FBP from the same intravenous cannula. Nevertheless, our study has analysed the haemoglobin from 589 participants.

Our study did not report on ethnicity or gender. Although gender does not play a significant role in prepubescent children, future studies should incorporate this into their data analysis.

Reporting Checklist: The authors have completed the STROBE reporting checklist. Available at http://dx.doi.org/10.21037/ajo-20-89

Conflicts of Interest: All authors have completed the ICMJE uniform disclosure form (available at http://dx.doi.org/10.21037/ajo-20-89). SV serves as an unpaid editorial board member of the Australian Journal of Otolaryngology from Jan 2019 to Dec 2022. The other authors have no conflicts of interest to declare.

Ethical Statement: The authors are accountable for all aspects of the work in ensuring that questions related to the accuracy or integrity of any part of the work are appropriately investigated and resolved. The study was conducted in accordance with the Declaration of Helsinki (as revised in 2013). Ethical approval was obtained via institutional Human Research Ethics Committee (reference number 1671) and all patients provided informed consent.