The complexities of practising equitable Rhinology within resource limitations

Sinonasal disease is known to be highly prevalent and to cause significant morbidity across western societies (1,2). Conditions such as chronic rhinosinusitis (CRS), allergic rhinitis (AR) and nasal septum deviation all contribute considerably to this prevalence.

Few data exist regarding the epidemiology of sinonasal disease in New Zealand although multiple pertinent risk factors have been evidenced internationally. Damp housing predisposes to both CRS and AR (3,4), and a causal correlation between tobacco smoking and CRS has also been identified (1). For context, 10% of the population reported housing dampness in 2010/11 (5), and 15% were current smokers as of 2017/08 (6). Hence it is probable that New Zealand has a considerable, as yet unquantified, burden of sinonasal disease.

Sinonasal disease exerts a multifold burden on individual health. Sinonasal-specific symptoms such as nasal congestion, rhinorrhoea, and hyposmia cause considerable impairment (1,7). Non-localised corollaries including depression and sleep disturbance often have similarly detrimental impacts (7-9). In appropriately indicated cases, it has been evidenced that surgical intervention is most efficacious in improving sinonasal symptoms and restoring quality of life (10,11). The provision of care for sinonasal disease is, however, increasingly restricted by the funding constraints of public healthcare systems (12). In New Zealand, such constraints necessitate that a notable proportion of new referrals for Public Hospital Otolaryngology (ORL) care are declined at the time of referral, in proportions dictated by local capacity. Referrals are declined mostly on account of morbidity as subjectively reported in the referral letter. At Waikato Public Hospital, the triaging process in which ORL referrals are accepted or declined is performed by the Specialist Otolaryngologists.

This study aims to: (I) gather initial data regarding the burden and distribution of sinonasal disease in the Waikato region of New Zealand and (II) examine the impact of resource constraints on the provision of equitable publicly-funded care.

We present the following article in accordance with the STROBE reporting checklist (available at http://dx.doi.org/10.21037/ajo-20-72).

The study was conducted in accordance with the Declaration of Helsinki (as revised in 2013). Ethics approval was obtained from The University of Auckland Human Participants Ethics Committee (ref: 022185) and informed consent was taken from all individual participants.

A list showing all new patient referrals to the ORL Department at Waikato Hospital over a 6-month period (May to October 2018) was retrospectively reviewed. All patients referred primarily for symptoms of sinonasal disease aged 16 years or over at the time of referral were included. Patients referred for epistaxis or acute nasal trauma were excluded. Anonymous demographic data pertaining to age at the time of referral, ethnicity, and sex were collected. In order to be comparable with projections for the Waikato population, ethnicity was classified using a prioritised ethnicity system (Māori, Pacific peoples, Asians, and other ethnicities) and age banded in 10-year wide groupings. The referral status of each eligible patient was also recorded.

Three study groups were defined. The first consisted of all included patients who had their referral to the ORL Department over the 6-month period declined. The second consisted of all those accepted to the Outpatient Clinic who attended over a 4-week period between December 2018 and January 2019. The third consisted of all patients who underwent sinonasal surgery over the same 4-week period. Patients declined from clinic were invited to participate in the study via mail. The other two groups were invited in person on their arrival to the Outpatient Clinic or Day of Surgery Admission respectively.

Patients within each of the three groups were invited to complete two quality of life surveys: the generic Medical Outcomes Study Short Form 36 and the disease-specific 22-item Sinonasal Outcome Tool (SNOT-22). These were both administered as written questionnaires.

For scoring, the items of the SF-36 were divided between eight health domains. A score for each domain was calculated on a scale from 0 to 100, as per the SF-36 guidelines (13), with a higher score equivalent to a more favourable health state. For the SNOT-22, each item was scored on a scale of 0 to 5 by participants, with a higher score equivalent to greater symptom severity. A total SNOT-22 score was calculated cumulatively with the range of possible scores extending from 0 to 110.

Missing data values were handled as per the scoring guidelines for each quality of life survey.

Mean overall SF-36 and total SNOT-22 scores were analysed with linear models assuming a normal distribution. Incidence counts were analysed with a generalised linear model assuming Poisson distribution with the natural logarithm as link. The logarithm of the population counts was used as an offset in the models for incidence. Residuals were checked for assumptions of the analysis. Calculations were carried out using R (14). 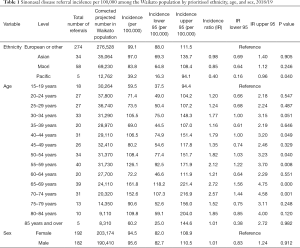 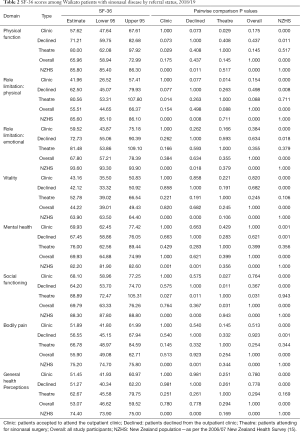 The epidemiologic data elucidate a substantial local disease burden that appears unequally distributed with respect to both ethnicity and age. In existing international data, the incidence of sinonasal disease has been disparately high among socio-economically deprived ethnic groups, most likely as a consequence of disparate living conditions and access to healthcare (17). Conversely, Māori and Pacific peoples, the two ethnic groups of lowest average socio-economic status in New Zealand (18), experienced the lowest incidence of outpatient referrals over this study period. Inequitable barriers to primary healthcare access seemingly impeded a relatively high proportion of these individuals obtaining outpatient referrals (analogous to exclusion from this sample). Hence any true ethnic disparities in incidence may have been masked by sampling limitation and further investigation in this area is warranted.

The questionnaire data corroborate existing evidence that sinonasal disease and its sequelae have a profound detrimental impact on quality of life.

Allocation of care and clinical applicability

Interestingly, patients attending theatre had a favourable general health state relative to both groups of patients referred to clinic yet the SNOT-22 scores of all three study groups exhibited no significant disparity. This incongruity is most feasibly a consequence of the SF-36, as a holistic measure of health status, being subject to relatively substantive bias by dispositional optimism (19). This subjectivity was likely exacerbated in patients awaiting surgery due to perceived impending health improvements. Consequently, the specific symptom reporting of the SNOT-22 appears to be the more pertinent of the two measures in this context. The approximate equivalence of SNOT-22 score across all three study groups is alarming given that it is a reliable predictor of post-surgical improvement in the context of CRS (10). This equivalence hence evidences a substantial presently unmet need for publicly funded surgical care.

The lack of a significant difference in both health status and symptom severity between patients accepted to clinic and those declined also points toward an underprovision of care. Further, it is also likely indicative of inadequacies in current referrals from primary care causing an inequitable distribution of secondary and tertiary resources. This would be in line with a 2009 Irish audit which found that general practitioners were not providing Ear Nose and Throat referrals competently (20). The Waikato Public Hospital ORL Department has begun developing a procedure for incorporating use of the SNOT-22 into triage processes with the intention of mitigating inequities in referral acceptance. Although this does not negate the importance of specialist examination and investigation, the existing triage procedures are evidently allocating this with considerable inefficiency.

The predominant limitation of this study is the non-uniformity of survey method. The response rate of patients sent mail surveys was 19% (in comparison to the 100% response rate among theatre patients recruited in person) and hence established a risk of sample non-representation.

There is a particular need to promote referral of patients from disadvantaged ethnic groups for sinonasal care. This should involve addressing upstream factors regarding inequities in access to and referral from primary care. There appears to be a holistic under-provision of publicly funded care. Alternative methods of outpatient referral screening are nonetheless requisite to ensure access to this is more equitable. The disease-specific SNOT-22 would figure to be a practical and generalisable tool to assist with triaging of patients referred to outpatient clinics for sinonasal care.

Presented at the General and Scientific Meeting of the New Zealand Society of Otolaryngology, Head and Neck Surgery, 17 October 2019, Dunedin, New Zealand.

Funding: This work was supported by the Waikato District Health Board (Summer Studentship Grant).

Reporting Checklist: The authors have completed the STROBE reporting checklist. Available at http://dx.doi.org/10.21037/ajo-20-72

Conflicts of Interest: All authors have completed the ICMJE uniform disclosure form (available at http://dx.doi.org/10.21037/ajo-20-72). All authors reports that this work was supported by the Waikato District Health Board (Summer Studentship Grant). LC reports that travel funding for scientific presentation was obtained after completion of the project and receipt of a written abstract. AW reports payment from local lecture-based teaching of General Practice trainees. AW is a board member, Waikato Postgraduate Medical Executive; Vice-Chair & Head of Research, New Zealand Otolaryngology Training, Education and Assessment Committee; the founder member of Waikato Institute of Surgical Education and Research www.wiser.net.nz; Principal Investigator, Clinical Trials New Zealand. The authors have no other conflicts of interest to declare.

Ethical Statement: The authors are accountable for all aspects of the work in ensuring that questions related to the accuracy or integrity of any part of the work are appropriately investigated and resolved. The study was conducted in accordance with the Declaration of Helsinki (as revised in 2013). Ethics approval was obtained from The University of Auckland Human Participants Ethics Committee (ref: 022185) and informed consent was taken from all individual participants.