Herpes zoster isolated in the glossopharyngeal nerve: a case report and literature review

Varicella zoster virus (VZV) is a member of the Herpesviridae family and the Alphaherpesvirinae sub-family, which also include herpes simplex virus (HSV) 1 and 2 (1). VZV invades the upper respiratory mucosa and reportedly spreads to the tonsils and lymphoid tissue. VZV is also known to travel to the cell bodies of neurons in the dorsal root ganglia of spinal nerves and cranial nerve ganglia where it may remain latent for years or decades (2). VZV reactivation can occur when the patient is stressed or immunocompromised, causing shingles (herpes zoster)—a localised, non-infectious, vesicular rash with associated pain of the affected cutaneous dermatome. The most common sites of VZV latency within cranial nerves include the ophthalmic division (V1) of the trigeminal nerve (herpes zoster ophthalmicus) and the facial nerve [herpes zoster oticus or Ramsay Hunt syndrome (RHS)] (3). It has been reported that the glossopharyngeal nerve (GN) can be affected by VZV reactivation but usually presents as part of a cranial polyneuropathy. A single-site analysis of 330 individuals who had VZV reactivation with cranial nerve involvement found that 0.9% of cases involved the GN but never in isolation (3).

Here, we present a rare case of herpes zoster isolated to the GN in accordance with the CARE reporting checklist (available at https://www.theajo.com/article/view/10.21037/ajo-21-29/rc). A review of the literature is also presented to summarise contemporaneous primary research surrounding herpes zoster impacting the GN.

A 57-year-old male presented to his primary care physician with severe right-sided odynophagia and worsening headache over three days. On examination, vesicles were present on the right soft palate, there was no neck stiffness nor photophobia to suggest meningitis, and no other neurological symptoms nor signs. A swab of the vesicular lesions was taken for polymerase chain reaction (PCR) assay of HSV and VZV. Pathology results confirmed VZV and were negative for HSV1 and HSV2. The patient was treated with oral Famciclovir 250 mg (three times daily; t.i.d.) for 5 days with analgesia, the management plan was determined after consultation with and an Ear, Nose and Throat (ENT) surgeon.

The patient returned 2 days later with excruciating pain in the region of the vesicular lesions causing insomnia and anorexia, and the patient noted an absence of taste on the right side of the posterior tongue. Management continued with Famciclovir (t.i.d.) and the addition of Oxycodone 5 mg (pro re nata; p.r.n.) for pain.

Three days later, the patient returned for review after completing 5 days of Famciclovir. On clinical examination, the vesicular lesions had resolved, but dysgeusia (loss of sweet taste and sensitivity to salty taste) was still present on the right posterior tongue. The patient reported reduced hearing and right otalgia, but examination of the ear was normal, with no vesicles present on the pinna, external auditory canal, or tympanic membrane. Generalised headache and right orbital pain were present, as well as hypoaesthesiae of the right scalp.

Magnetic resonance imaging (MRI) neurography of the brain and skull base was performed to examine the presence of neuronitis in the right GN, trigeminal nerve (orbital pain and scalp paraesthesia), and other cranial nerves (otalgia and muffled hearing), as seen clinically.

MRI neurography was performed with axial space sequences through the posterior fossa (Figure 1). This revealed thickening and enhancement of a short segment (preforaminal cisternal) of the right GN (Figure 1). Neither the trigeminal nerve nor the abducens, facial, and vestibulocochlear nerve complexes displayed abnormalities. There were no obvious denervation changes in the pharyngeal muscles or the soft palate, and there was a normal symmetrical enhancement of the geniculate ganglia.

All procedures performed in this study were in accordance with the Declaration of Helsinki (as revised in 2013). Written informed consent was obtained from the patient for publication of this case report and accompanying images. A copy of the written consent is available for review by the editorial office of this journal.

A comprehensive search was done on Medline, Embase, and PubMed databases. Search and MeSH terms for VZV infection, herpes zoster, and GN were identified through preliminary searches and combined with the Boolean terms as follows: (“varicella zoster virus” OR “Shingles” OR “Herpes zoster”) AND (“glossopharyngeal nerve” OR “ninth cranial nerve”). The search was run on years of coverage from 2012 to the present, and other search filters include human studies, English text only, full text, peer-reviewed articles and primary research articles.

Electronic searching identified 32 citations in Medline Ovid, PubMed and Embase from 2012 to 2022, of which 14 duplicate papers were removed. The remaining papers were reviewed for relevance to the topic by title and abstract with 13 articles meeting the criteria. Full texts with primary research in the English language were subsequently sourced for all articles with a further 5 texts excluded. A summary is included using the PRISMA (Preferred Reporting Items for Systematic Reviews and Meta-Analyses) flowchart (Figure 2). 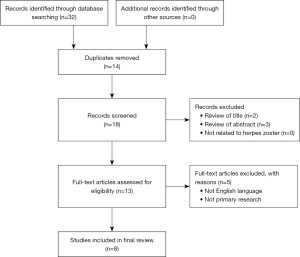 Eight case studies articles were included, published between 2012 and 2022, comprising a total of eight patients. Two articles were published in China and Japan, and one article from Australia, Korea, France and Portugal. Patients’ ages ranged from 27 to 78 years of age, with the mean age 59 years and equally affecting males and females (four of each).

Table 1 summarises the affected nerves in addition to the GN. The vagus nerve was the most affected nerve which was seen in 88% of the cases, other cranial nerves affected were facial (50%), vestibulocochlear (38%), trigeminal (25%), abducens (13%) and accessory (13%). Further patients’ characteristics are summarized in Table 1. All patients presented with lateralized symptoms. Interestingly, almost two-thirds of the patients complained of otalgia and hoarseness. While half of the patients suffered from facial muscle weakness/palsy, vocal cord palsy, dysphagia and vesicular rashes. Other frequently reported symptoms included reduced gag reflex (38%), nystagmus (25%) and autonomic system dysfunction (13% blood pressure, vomiting, hiccups). One-quarter of the patients made a full recovery. In 63% of the patients, dysphagia and swallowing dysfunction persisted, which required ongoing feeding assistance, while at least 25% of patients still retained some form of vocal cord dysfunction.

Herpes zoster is a common clinical entity caused by the reactivation of the latent VZV in the dorsal root ganglia or cranial nerve ganglia that may affect sensory, motor, autonomic, and special sensory fibres. Commonly affected nerves are the trigeminal and facial nerves (RHS), while the involvement of the other cranial nerves is infrequent (3). There have been some reported cases of polyneuropathies affecting the GN; for example, a study of 330 individuals with cranial nerve VZV involvement by Tsau et al. (3) in 2020 found that 0.9% of cases impacted the GN, while Ragozzino et al. (12) in 1982 found that 0.2% of 590 VZV cranial nerve cases affected the GN. Our literature review demonstrated that all patients with herpes zoster involving the GN had polyneuropathies with the vagus (88%) and facial nerves (50%) being additionally affected. However, VZV impacting the GN in isolation—although cases have been reported—is extremely rare (Tamakawa, 1999; Nakagawa, 2006) (13,14). 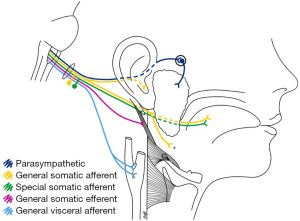 Prodromal symptoms—preceding the vesicular rash—included hyperalgesia along the GN’s dermatome and a generalised headache. The patient’s odynophagia corresponds with the pattern of vesicular eruption of the soft palate, where the GN mediates the somatic sensation of the tonsils, tongue base (posterior third of the tongue and the vallecula), and nasopharynx (Figure 3). The GN affords the somatic afferent portion of the gag reflex, thus explaining the patient’s unilateral (right-sided) absence of a gag reflex. These findings were further supported by T1- and T2-weighted MRI sequences that demonstrated no denervation changes of the pharyngeal muscles or the soft palate, suggesting that the efferent limb (vagus nerve) of the gag reflex was intact.

The hypo/dysgeusia experienced on the right posterior tongue reflects the GN’s special sensory innervation of taste buds on the posterior third of the tongue. There was no functional indication of hyposalivation—a presentation that could result when the GN’s parasympathetic fibres to the parotid gland (Figure 3) are disturbed; however, it is possible that any reduced ipsilateral (right-sided) parotid salivation may have gone unnoticed due to compensatory secretion by the other salivary glands. Moreover, radiological assessment of the parotid gland for denervation or atrophy appears inconclusive when assessing lesions affecting the GN pathway (15).

Hearing loss due to herpes zoster frequently manifests in patients with RHS, which is assumed to be typical symptoms of facial and vestibulocochlear nerve dysfunction caused by reactivation of VZV in the geniculate ganglia (16). Although the patient in this case study reported muffled hearing, there was no MRI evidence of perturbations to these structures. There was no obvious cause for this, and unfortunately, no audiology testing was performed at the time or later, otherwise this may have shown hearing loss or abnormal tympanometry. Perhaps the stylopharyngeus muscle became dysfunctional, leading to eustachian tube dysfunction, which may then have caused the mild hearing loss (muffled hearing).

The auriculotemporal branch of the trigeminal nerve, the great auricular nerve of the cervical plexus, the auricular branch of the vagus nerve (Arnold’s nerve) and the tympanic nerve (Jacobson’s nerve) of the GN, all distribute to the skin of the auricle, the external acoustic meatus and tympanic membrane (17). Because of the diverse nature of the ear’s sensory innervation, a wide variety of disorders can produce referred otalgia. Pharyngeal inflammatory disease can cause referred otalgia via the GN, which would appear consistent in this case (18). A pathological process involving the pharyngeal region can refer pain to the ear via these tympanic branches. Moreover, pain from the ear can radiate often to the vertex and to the temple but may sometimes spread towards other areas of the head, which could explain the patient’s facial pain in the V1 territory.

In summary, we have reported a unique case of herpes zoster isolated to the right GN. VZV infection of the GN most often occurs in the context of a polyneuropathy, which our literature review demonstrates. VZV was confirmed by PCR assay from a swab of the vesicles on the patient’s right soft palate. MRI findings were also suggestive of right GN neuronitis. The main clinical symptoms were unilateral odynophagia, hypo/dysgeusia, absent gag reflex, and otalgia. The patient was treated with oral Famciclovir and analgesia and made a full recovery.

The authors would like to thank Dr. Mitesh Gandhi, radiologist who assisted in the acquisition of the MRI image and providing his oversight in the radiology section.

Reporting Checklist: The authors have completed the CARE reporting checklist. Available at https://www.theajo.com/article/view/10.21037/ajo-21-29/rc

Conflicts of Interest: All authors have completed the ICMJE uniform disclosure form (available at https://www.theajo.com/article/view/10.21037/ajo-21-29/coif). The authors have no conflicts of interests to declare.

Ethical Statement: The authors are accountable for all aspects of the work in ensuring that questions related to the accuracy or integrity of any part of the work are appropriately investigated and resolved. All procedures performed in this study were in accordance with the Declaration of Helsinki (as revised in 2013). Written informed consent was obtained from the patient for publication of this case report and accompanying images. A copy of the written consent is available for review by the editorial office of this journal.