RFS manifests after the rapid re-introduction of nutritional therapy, resulting in complicated metabolic electrolyte shifts (3). The key electrolyte derangement in RFS is hypophosphatemia, which can cause hypotension, arrythmia, delirium and even mortality (4). By definition, the isolated decline in phosphate levels following refeeding is referred to as refeeding phenomena (RFP). Unfortunately, RFP and RFS often go unrecognised, but simply being aware of its existence and organising biochemical investigations can assist in timely electrolyte replacements to avoid the development of symptoms (5).

The current literature has widely focused on nutritional interventions in malnourished HNC patients receiving chemoradiotherapy (6-10). There is only one study documenting the incidence of RFS and RFP in a heterogenous group of HNC patients undergoing surgical treatment (4). Given that patients routinely undergo artificial enteral feeding via nasogastric tube after surgical oncological resections, the acute post-operative setting highlights patients at high risk of developing RFP.

The aim of this retrospective study is to determine the post-operative incidence of RFP in our surgically treated oral cavity cancer patients and to identify the highest-risk day of developing hypophosphatemia in this vulnerable cohort. A secondary objective is to identify risk factors for developing post-operative RFP. We present the following article in accordance with the STROBE reporting checklist (available at https://www.theajo.com/article/view/10.21037/ajo-21-31/rc).

The HNC unit database was used to identify 187 patients with oral cancer who underwent definitive surgical treatment. Serum phosphate levels for all 187 patients were obtained from the Fiona Stanley Hospital electronic results system, i.Clinical Manager, from day 1 to day 10 post-operatively. Patients were then included in the study if they had their serum phosphate levels checked at least twice during the first 10 days post-operation, one of which had to be within the first 4 days (11). This would allow for a trend in the phosphate levels to be detected. A total of 104 patients met this inclusion criteria and formed the final study population. Patient demographics, cancer subsite and tumour stage details were collected from the digital medical record.

RFP is defined in this study as having a serum phosphate (PO4) level of less than 0.75 mmol/L on any 1 of the 10 days post-operatively (4,12). The 104 serum phosphate datasets were analysed to identify the post-operative incidence of RFP as per this definition. Positive data sets were subsequently subdivided into mild, moderate and severe hypophosphatemia. RFP was subdivided and defined as mild (PO4 0.65–0.74 mmol/L), moderate (PO4 0.32–0.64 mmol/L),and severe (≤0.31 mmol/L) (13).

There were 104 patients who met inclusion criteria. Baseline patient characteristics including demographics, tumour details, and pre-operative nutrition factors are shown in Table 1.

Baseline characteristics of study population. Staging as per the AJCC 8th edition 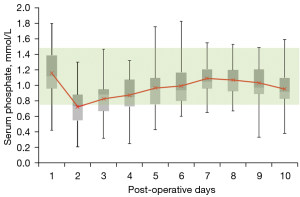 Age >60 years and pre-operative alcohol intake were shown to be predictive of post-operative hypophosphatemia (Table 2). One-way analysis of variance (ANOVA) test confirmed there was a statistically significant difference in the post-operative serum phosphate levels when patients were stratified by daily alcohol intake (P=0.002) (Table 3). Mean serum phosphate levels were significantly lower in patients who did not drink alcohol [or drank <1 standard drink (SD)/day] compared to those who drank 3–5 SD/day (P=0.047) and >5 SD/day (P=0.004). A similar trend was seen for non-drinking patients compared to those who drank 1–2 SD/day, although this did not reach statistical significance (P=0.241).

The post-operative incidence of RFP in our surgically treated cohort of 104 oral cavity cancer patients was 58.7%, with day 2 post-operation marking the highest risk day of developing hypophosphataemia.

To the best of the authors’ knowledge, this is the first study to examine the incidence of RFP in a surgical cohort of patients with oral cavity cancers. In comparison, Rasmussen et al.’s observational study in 2016 published a combined RFP and RFS rate of 72% in a cohort of 54 surgically treated patients with HNC of various sites (4). Review of the literature was unable to identify any further published studies that have examined the incidence of RFP in surgically treated HNC patients.

The United Kingdom National Multidisciplinary Guidelines on nutritional management in HNC quote RFS data from a retrospective study based at a United Kingdom regional cancer centre. The quoted data demonstrates that 37.5% of HNC patients are at risk of RFS, with a RFS incidence rate of 9.5%, when RFS is defined as a serum phosphate level of less than 0.4 mmol/L (15). However, the original data source could not be identified and thus a comparison with our results is difficult.

In the present study, patients were usually commenced on enteral nasogastric feeds day 1 post-operation. Our results suggest that the steepest decline in phosphate levels occurred within the 24 hours after the commencement of refeeding. This is a clinically useful indicator for treating medical teams to ensure electrolytes are checked in a timely manner. The earlier RFP is identified, the earlier phosphate supplementation can be administered to potentially avoid the development of RFS symptoms. Whilst the lowest mean level of phosphate on post-operative day 2 was only slightly below the normal range (0.72 mmol/L), it has been suggested that the risk of developing symptoms from hypophosphataemia could be due to a steep decline in phosphate rather than the absolute phosphate level itself (4). The consequent uptrend in phosphate levels after day 2 is assumed to be explained by commencement of electrolyte supplementation and cautious titrating of enteral feeds under the guidance of the treating dietician as per refeeding treatment protocols.

Being over the age of 60 and level of alcohol consumption pre-operatively were statistically significant risk factors for the development of post-operative RFP in this study. Interestingly, we found that higher levels of pre-operative alcohol intake were associated with higher mean levels of serum phosphate, that is, a lower risk of RFP. On the contrary, Rasmussen et al.’s study suggests that a high daily alcohol intake was associated with larger declines in serum phosphate (P=0.018), that is a higher risk of RFP (4). This could possibly be because daily alcohol intake was not stratified in their study unlike the present study, hence the subtle but key difference in the findings. Alternatively, this could also represent a positive change in clinical practice over time, with increasing awareness of the risk of significant alcohol intake and risk of refeeding. Our team’s dieticians may have adopted a more cautious prophylactic approach in managing patients with known significant pre-operative alcohol intake. This could have included commencing pre-operative multivitamins or decreasing the rate of enteral feeds post-operatively.

Radiotherapy to the head and neck region is a commonly used therapeutic strategy for HNC, with a well-documented side effect profile of mucositis, xerostomia, dysphagia, dysgeusia, etc. (16). The practice at our institution is to expect a degree of malnutrition and higher risk of RFP in this cohort of patients. Rasmussen et al.’s study demonstrated statistically significant declines in phosphate levels in their patients who had previous radiotherapy (4). However, in the present study, we were unable to establish a significant relationship between development of RFP and previous history of radiotherapy. This could possibly be explained by our lower incidence rate of previous radiotherapy in our cohort of 11.5% (12/104) only, compared to Rasmussen et al.’s 27.8% (15/54), which is possibly a by-product of the heterogenous group of cancer sites included in that study (4).

The present results found no association between potential risk factors of pre-operative weight loss and self-reported reduced oral intake with developing RFP. We acknowledge that this could be secondary to the unreliable and inconsistent nature of self-reported risk factors which rely on patient recall. Rasmussen et al.’s study also describes similar challenges (4). For future studies, we would recommend use of validated dysphagia screening tools or a similar scale to optimise standardisation for highly variable self-reported risk factors through a prospective study design. We further recommend consideration of possible synergistic interaction of risk factors.

We recognise that development of RFS is perhaps a more clinically relevant metric than RFP. We chose to study RFP because it is objectively quantifiable, readily measurable, and can be reasonably expected to increase the risk of RFS. However, this somewhat limits our ability to draw conclusions regarding the clinical implications of our results. This study also did not assess other biomarkers of RFS such as serum potassium or magnesium levels as these are often readily replaced in the post-operative phase at our institution. Patient’s regular medications such as diuretics and background medical conditions can also influence these levels. Therefore, any changes in the trends of these two electrolytes may not be attributable to the refeeding process alone. Given the risk of confounding, we chose not to analyse the levels of potassium and magnesium in this study.

Our study is limited by the weaknesses common to retrospective studies, including selection bias and confounding. Selection of patients to be included in the study depended on availability of phosphate levels from the post-operative period. Eight-three patients either did not have any phosphate levels checked or insufficiently checked and therefore were unable to be included. From observations, our excluded cohort consisted mostly of seemingly ‘low-risk’ patients, who were largely of early clinical stage T1 and T2 tumours. Selection bias through the unintentional exclusion of this cohort could potentially explain why we were unable to demonstrate tumour stage as a significant predictive risk factor and may have over-influenced the overall rate of RFP reported in this study. The failure to measure post-operative phosphate levels in all surgically treated patients could potentially represent the previous low awareness and lack of acknowledgement of the risk of refeeding in this vulnerable surgical cohort, hence highlighting the importance of the current study.

RFP is common in patients with oral cavity cancer who undergo surgical treatment and was observed in 58.7% of the current study population. We observed the lowest serum phosphate levels on the second post-operative day, and therefore recommend that bloodwork should be performed at that point to allow timely electrolyte replacement to avoid the potentially fatal, RFS. Age greater than 60 years and low pre-operative alcohol intake were found to be risk factors for development of RFP. Future studies should be directed towards further clarifying the risk factors for developing RFP in a larger cohort of surgical patients, to allow better identification amongst this already high-risk population.

Reporting Checklist: The authors have completed the STROBE reporting checklist. Available at https://www.theajo.com/article/view/10.21037/ajo-21-31/rc

Conflicts of Interest: All authors have completed the ICMJE uniform disclosure form (available at https://www.theajo.com/article/view/10.21037/ajo-21-31/coif). The authors have no conflicts of interests to declare.

Ethical Statement: The authors are accountable for all aspects of the work in ensuring that questions related to the accuracy or integrity of any part of the work are appropriately investigated and resolved. The study was conducted in accordance with the Declaration of Helsinki (as revised in 2013). The study was approved by the South Metro Health Service Fiona Stanley hospital Fremantle hospital group (approval number GEKO 42350). Informed consent was waived by the institutional ethics committee.