A comparison of tonsillectomy techniques: a 10-year retrospective audit of a large regional hospital in Australia

Extracapsular tonsillectomy is defined as a surgical procedure that completely removes the palatine tonsils, including its capsule, by dissecting the peritonsillar space between the tonsil capsule and the muscular wall (1). Tonsillectomy remains one of the most common ear, nose and throat (ENT) procedures performed worldwide (2). Recurrent tonsillitis and obstructive sleep apnoea (OSA) are the most common indications for tonsillectomy (3).

Despite being considered a low-risk operation, tonsillectomy in Australian public hospitals had the highest readmission rates in 2017–2018 compared to other frequently performed surgeries (4). Readmissions to hospital are most often due to postoperative haemorrhage, pain and/or fever. Post-tonsillectomy haemorrhage (PTH) can be classified as either primary (within 24 hours of surgery) or secondary (occurring after 24 hours). Rates of primary and secondary PTH have been reported to be 0.2–3.2% and 0.1–9.4%, respectively (5-9).

There is ongoing debate as to which technique yields the best postoperative recovery. Tonsillectomy techniques are traditionally categorised as “cold” (cold steel dissection with suture or diathermy haemostasis) or “hot” (the use of an instrument delivering thermal energy for both dissection and haemostasis such as coblation, bipolar diathermy and Harmonic scalpel) (10).

In Australia, approximately 7 million people (29% of the population) live outside major cities (11). Dubbo Base Hospital is located within Western NSW Local Health District (WNSWLHD) covering an area of 246,676 sq/km, greater than the land size of Great Britain, serving an estimated population of 276,000. Furthermore, 11.1% of the population are Aboriginal and/or Torres Strait Islander people, which is significantly higher than the NSW average of 2.1% (12). Performing tonsillectomies in such regional areas remains challenging due to availability of ENT surgeons and the increased responsibility of general practitioners and emergency physicians in managing its complications. Therefore, identifying the most suitable surgical technique and risk factors for readmission is essential in ameliorating the rates of PTH. This study aims to investigate the rate of PTH with regards to hot and cold tonsillectomy techniques in a regional Australian hospital, and its associated patient demographics. We present the following article in accordance with the STROBE reporting checklist (available at https://www.theajo.com/article/view/10.21037/ajo-21-52/rc).

The study was conducted in accordance with the Declaration of Helsinki (as revised in 2013) and after being approved by the Research Ethics and Governance Office at Royal Prince Alfred Hospital (X21-0037 & 2021/ETH00257). Informed consent for this retrospective analysis was waived.

A retrospective medical records review was undertaken on all patients who underwent tonsillectomy between January 1, 2010, and September 30, 2020, at Dubbo Base Hospital, a regional hospital in New South Wales, Australia. All procedures were performed by one of four ENT surgeons or by an ENT registrar under the direct supervision of the consultant ENT surgeon. The data on demographics, operation performed, technique used, length of operation, primary and/or secondary haemorrhage encountered, and readmission reasons were all collected.

The hospital’s routine management of post tonsillectomy haemorrhage included urgent ENT review and baseline bloods (including group and screen) with administration of intravenous tranexamic acid (if not contraindicated) and antibiotics, and hydrogen peroxide gargles. If the patient did not have any active bleeding, they were admitted overnight for observations, however if they exhibited active bleeding, the patient was taken to the operating theatres for arrest of the haemorrhage with or without blood transfusion.

All statistical analyses were performed using IBM’s SPSS Statistics program Version 28. Statistical significance was set at P<0.05. Univariate logistic regression was used to compare the variables between those who had PTH (primary or secondary) and those who did not. Furthermore, multivariate logistic regression was used to assess the association between the independent variables and PTH. 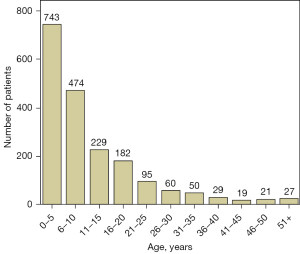 *, other operations include grommet insertion, turbinate reduction and/or septoplasty.

Tonsillectomy is one of the most common ENT procedures, with over 30,000 cases performed between 2015 and 2016 in Australia alone (13). Although recurrent tonsillitis and OSA are the most common indications for tonsillectomy, other indications include recurrent peritonsillar abscess and tonsillar malignancy, amongst others (3,14). This procedure is commonly performed concurrently with adenoidectomy (surgical ablation of adenoid tissue), especially for the surgical management of sleep-disordered breathing (15).

This investigation represents the largest Australian regional study with almost two thousand patients over a 10-year period, of which 32% identified as Aboriginal and/or Torres Strait Islander. Performing tonsillectomy in a rural or regional setting has always been challenging due to the scarcity of ENT surgeons and the large catchment area that needs to be covered. Although uncommon, some ENT surgeons visit these regions for 24 to 48 hours to perform such operations before returning to their metropolitan practices (16). Due to these reasons, the complications that arise may need to be initially managed by the local general practitioner or emergency physician.

In this Australian regional hospital, the overall primary and secondary PTH rates were 0.7% and 3.4%, respectively, being comparable to a recent study by Jones et al. who described rates of 1% for primary PTH and 3% for secondary PTH, in a different regional locality in NSW (17). Conversely, in contrast to the National Tonsil Surgery Register in Sweden which analysed over 15,000 patients, our study showed cold steel dissection with suction diathermy to have much lower primary and secondary PTH rates (0.8% and 3.0% compared with 3.4% and 8.8%, respectively) (7).

Primary PTH is generally acknowledged to be caused by inadequate haemostasis during the surgery, however the exact cause of secondary PTH is yet to be definitively established, although the sloughing of eschar, tonsil bed infection, postoperative nonsteroidal anti-inflammatory drug (NSAID) usage, or idiopathic causes have all been postulated (18,19). Furthermore, secondary PTH has been linked with several risk factors such as a history of recurrent tonsillitis, attention deficit hyperactivity disorder (ADHD), excessive intraoperative blood loss and elevated postoperative mean arterial pressure (20,21). Additionally, it has been shown that patients older than 12 years have a 3-fold increase in the likelihood of secondary PTH (22). This study supports a 1-year increase in age to be a risk factor for secondary PTH. This is most likely related to the increased tonsillar scarring, with older patients mostly undergoing tonsillectomy for recurrent tonsillitis (23). However, in this study, secondary PTH was not associated with lengthier operations, an indirect proxy for intraoperative blood loss and haemostasis. Additionally, the mean length of operation of 53 minutes for tonsillectomy could be explained by the fact that the majority of these operations were performed by junior ENT registrars, under the direct supervision of the ENT consultant.

Interestingly, primary PTH was shown to be associated with secondary PTH, which has previously not been reported. The authors recommend a longer observation period for patients who develop primary PTH with the addition of a course of tranexamic acid and hydrogen peroxide gargles whilst an inpatient and on discharge. Furthermore, a shorter postoperative follow up time is recommended.

Readmissions to hospital are most often due to haemorrhage, pain, dehydration and/or fever. The readmission rate at this regional hospital was 5.5%, with no significant difference between hot and cold tonsillectomy. It has been postulated that cold tonsillectomy yields less thermal injury and therefore reduced postoperative pain and dehydration, whereas hot tonsillectomy achieves better haemostasis and shorter operating time (24,25). Cold tonsillectomy was performed for the vast majority (71%) of these procedures with no statistically significant difference in the rate of PTH between cold and hot techniques. Furthermore, although coblation tonsillectomy with coagulation haemostasis had low number of patients, it resulted in 4 times as many secondary PTH when compared to the other two techniques. This may have been a possible reason why this technique has not been utilised more often in this hospital.

One of the main limitations of this study is that of retrospective audits; their inherent risk for bias. For example, patient and surgeon factors could in turn influence the technique used for the operation. Secondly, over seventy percent of cases were combined with other procedures such as adenoidectomy, grommet insertion, turbinate reduction, and septoplasty. This can skew results as performing more procedures would naturally take more time. Conversely, allowing more time for haemorrhages to declare themselves ensures adequate intraoperative haemostasis. Finally, although most operations were performed by the junior ENT registrar under the direct supervision of the consultant, exact data on the primary operator was not available which could influence factors such as PTH rate and operative time.

The authors would like to sincerely thank Dr. Gary Low for his valuable statistical contribution.

Reporting Checklist: The authors have completed the STROBE reporting checklist. Available at https://www.theajo.com/article/view/10.21037/ajo-21-52/rc

Conflicts of Interest: All authors have completed the ICMJE uniform disclosure form (available at https://www.theajo.com/article/view/10.21037/ajo-21-52/coif).The authors have no conflict of interest to declare.

Ethical Statement: The authors are accountable for all aspects of the work in ensuring that questions related to the accuracy or integrity of any part of the work are appropriately investigated and resolved. The study was conducted in accordance with the Declaration of Helsinki (as revised in 2013) and after being approved by the Research Ethics and Governance Office at Royal Prince Alfred Hospital (X21-0037 & 2021/ETH00257). Informed consent for this retrospective analysis was waived.