A stalwart of modern rhinology, Donald Leopold, passed away on June 11, 2022. He was born in Cleveland, Ohio, on September 27, 1947 and grew up adjacent to Lake Erie—building his life around family, athletics, and an interest in the sciences. While at the University of Michigan he nurtured a lifelong interest in learning and teaching, studied mechanical engineering, and explored interests in medicine and music. His life was guided by ambition and discovery, and the constant yearning to understand and to connect with the world around him. Don believed in the merits of hard work, eschewed elevators, and saw the immense beauty in the art of the possible. During his internationally recognized career in olfaction and rhinology, he focused his energies on patient care, education, and research. He was a leader within Otolaryngology for decades, serving as president of the American Rhinologic Society as well as the Chair of Otolaryngology at both Johns Hopkins Bayview Medical Center and the University of Nebraska. The consummate teacher and academician, Donald trained hundreds of students, residents and fellows over his almost 40-year career at SUNY Upstate, Johns Hopkins University, the University of Nebraska, and the University of Vermont.

He acknowledged that for “rhinology, as perhaps in no other area of surgery, has a disparity between biologic knowledge and surgical activity been so well demonstrated” (1). Dr. Leopold has trained many of the foremost names in our field today during his time as faculty and chair at the University of Nebraska and the University of Vermont. Professor Leopold was involved in olfactory disease and management well before it become an NIH priority (2). He ran a chemosensory rhinology fellowship for many years, training our current leaders in rhinology, and remained a contributor to even recent consensus documents on smell disorders (3). He changed the face of modern rhinology by providing an academic basis and assessment of clinical practice.

We fondly remember Don’s trips to Australia, as he actively contributed to multiple events in Sydney and Adelaide, including being the keynote speaker at our Australian Society of Otolaryngologists/Head & Neck Surgeons (ASOHNS) annual scientific meeting in 2003. He hosted us in Burlington, Vermont, and while he was keen to share his favourite coffee and donut stop with us (Figure 1), he remained the educator and teacher throughout. Equal share of our time was spent with the department and residents eager to learn from the visitors. Don continued the connection with Australia having appointment a past Sydney Rhinology Fellow as their rhinologist in Vermont, Dr. Carolyn Orgain. Professor Leopold posthumously continues his academic mission via an annual lectureship in his honour at the University of Vermont. There has now been a fund established to support his activities (Give.uvmhealth.org/leopold). We hope there are members of our profession, who were so inspired by Don’s work, that they similarly contribute during their career. 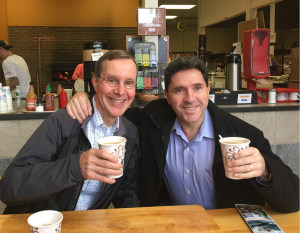 One of his greatest blessings was his love and marriage of 53 years to Sandy (Faller) Leopold. He was a dedicated father to his children Tanya, Kristin, and David, and grandfather to his seven grandchildren. Don was preceded in death by his parents Adelia and Leonard Leopold and siblings Laurel (Carey) Spicer and Allen Leopold. He is also survived by his sister Lenore (Dave) Nepveu and sister-in-law Karen Leopold.

We thank Dr. Carolyn Orgain for her contribution.

Conflicts of Interest: Both authors have completed the ICMJE uniform disclosure form (available at https://www.theajo.com/article/view/10.21037/ajo-22-28/coif). RJH serves as the Editor-in-Chief of Australian Journal of Otolaryngology. The other author has no conflicts of interest to declare.