Thickening of mucosa within the paranasal sinuses is frequently detected on diagnostic imaging of the head, even in patients with no apparent rhinologic disease. Incidental mucosal thickening is present in 12–38% of sinus computed tomography (CT) scans in asymptomatic adults (1-3). Magnetic resonance imaging (MRI) may detect even more incidental mucosal changes, with one large scale analysis reporting mucosal thickening in 49% of the general population (4). Previous studies have suggested that mucosal thickening is poorly correlated with sinonasal inflammation, in patients without chronic rhinosinusitis (CRS) (5-8). However, as the paranasal sinuses are only endoscopically accessible in the post-surgical setting, these studies have been unable to correlate imaging with direct endoscopic assessment of the sinuses and have relied upon patient reported symptoms to assess inflammation. In this context, patients who have received surgery for paranasal sinus or skull base tumors provide a convenient population, without CRS, in whom inflammation can be verified endoscopically.

This study aimed to determine the diagnostic performance of sinus MRI mucosal thickening, in patients without CRS, using validated endoscopic examination and patient reported symptoms. We present the following article in accordance with the STARD reporting checklist (available at https://www.theajo.com/article/view/10.21037/ajo-22-9/rc).

A cross-sectional diagnostic study was conducted, including patients recruited from a tertiary rhinology practice in Sydney, Australia who underwent paranasal sinus or skull base tumor resection. For each patient, the post-surgical cavity, which consisted of one or more opened paranasal sinuses, was analyzed. Follow-up was performed 3 months after surgery and included an MRI, endoscopy of the post-operative resection cavity, and patient reported outcome measurement through the Sino-Nasal Outcome Test 22 (SNOT-22). Data collection was planned and completed in a retrospective manner—after follow-up for included patients. The study was conducted in accordance with the declaration of Helsinki (as revised in 2013). The study was approved by the St Vincent’s Hospital Human Research Ethics Committee (SVH HREC 09/083). All participants provided informed and written consent for their use of their medical data for research.

Consecutive patients were recruited if they had received a paranasal sinus or skull base tumor resection, with at least 3 months of follow-up. Patients were excluded if they had a history of CRS, as defined by the 2012 EPOS guidelines, or previous endoscopic sinus surgery (ESS) (9). Atopy status was determined via immunoassay testing of blood samples taken perioperatively for allergen-specific Immunoglobulin E (sIgE), with four allergen mixes being employed (dust mite, grass, mold, and animal epithelium). Atopy status was defined as positive if a serum sIgE value of 0.35 KU/L or more was detected for any of the antigen mixes. Asthma status was defined as positive if the patient currently used inhaled asthma medications or had a known FEV1 increase >15% after bronchodilator challenge. Smoking status was determined if the patient currently used tobacco in any form, or if they had had ceased regular tobacco use within the previous twelve months. Aspirin sensitivity was defined as positive if the patient recalled respiratory exacerbation to aspirin or other non-steroidal anti-inflammatory drugs or had a positive lysine-aspirin challenge test.

Three-month follow-up T2-weighted MRI scans were used for MRI assessment. Each post-surgical cavity was considered to consist of up to 6 walls (left, right, superior, inferior, anterior and posterior), and the thickness of the mucosa was measured perpendicularly from the orientation of the corresponding wall to the point of maximal mucosal thickness (Figure 1). Nasoseptal flaps were used to reconstruct the skull base in some cases and were included in assessment of mucosal thickness. The nasal floor and septum from which these flaps were harvested was not considered to be part of the surgical cavity. Measurements were made using the digital ‘caliper’ function integrated within the DICOM reader software, InteleViewer (InteleRad, Canada), and were recorded in millimeters to one decimal point. MRI interpretation was performed blinded to endoscopic assessment and patient reported outcome measures. 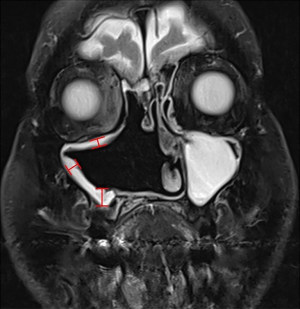 Figure 1 T2-weighted coronal MRI depicting a right post-surgical maxillary sinus cavity with significant mucosal thickening. The red bars represent the method used to measure the superior, right, and inferior walls of this cavity. Mucosal thickness was measured perpendicularly from the orientation of the underlying wall to the point of maximal thickness. MRI, magnetic resonance imaging.

Retrospective review of endoscopic video, blinded to MRI and clinical outcome measures, was used to score each wall of the post-surgical cavity via the Modified Lund-Mackay Endoscopic Score (MLMES) as defined by Snidvongs et al., a validated score sensitive to change and the patient experience (10). The MLMES comprises three subdomains—mucosa [0–6], discharge [0–2], and purulence [0 or 2]. The mucosa subdomain assesses mucosal inflammation and is composed of a seven-point ordinal scale, ranging from normal mucosa [0] to moderate oedema [3] to polypoid oedematous changes [4] to polyps extending beyond the cavity [6]. The Discharge subdomain assesses whether there is no discharge present [0], clear, thin discharge present [1], or thick, purulent discharge present [2]. The Purulence subdomain is a dichotomous score assessing whether purulent discharge is either not present [0] or present [2]. The MLMES score for each wall of the post-surgical cavity comprised the sum of the three subdomains, giving a total possible score of 10.

Patient reported symptoms were measured using the Sino-Nasal Outcome Test-22 (SNOT-22), which produces a score ranging from 0 to 110 (11). Pre-operative symptoms were not assessed as they could be confounded by tumor-related sinonasal dysfunction. Subdomains within the SNOT-22 were also analyzed, including the rhinitis, ear and facial pain, sleep, psychological and nasal symptoms subdomains (12,13). All questions within the SNOT-22 were assessed on a 6-point ordinal scale, ranging from 0 (‘no problem’) to 5 (‘problem as bad as it can be’).

Statistical analysis was conducted using SPSS 27 (SPSS Inc., Chicago). Continuous parametric data were expressed as mean ± standard deviation, non-parametric continuous data were expressed as median [interquartile range (IQR)], categorical data were expressed as percentages and ordinal data were expressed as medians. As MRI mucosal thickness, MLMES and SNOT-22 were not normally distributed as per the Shapiro-Wilk test (P<0.05), correlations between continuous variables were calculated using Spearman’s correlation coefficient. The clinical utility of MRI mucosal thickness to detect clinically significant inflammation was assessed using a receiver operational characteristic (ROC) curve. Clinically significant inflammation was defined using a threshold of ≥3 of the Mucosal MLMES subdomains on the corresponding wall. As such, the endoscopic appearance needed to be normal or near normal otherwise it was defined as inflammatory changes. The maximal Youden index (sensitivity + specificity – 1) was used to select the optimal diagnostic threshold and diagnostic performance measures including sensitivity and specificity were calculated (14).

Potential confounding factors, such as atopy status, were assessed by testing for differences in outcome variables between groups. Differences in MRI mucosal thickness, total MLMES, total SNOT-22 and subdomains of the SNOT-22 were assessed using the Mann-Whitney U test. Differences between the population groups in the ordinal subdomains of the MLMES were tested via the Kendall’s Tau-b test, while the nominal subdomain of purulence was tested using Fisher’s Exact test.

Relationship between MRI and endoscopic evidence of inflammation

Diagnostic utility of MRI for inflammation 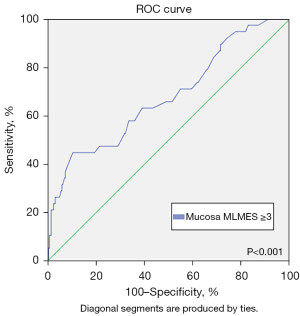 Previous studies have emphasized that incidentally detected mucosal thickening in asymptomatic patients is not clinically significant. Various definitions have been employed to define clinically significant inflammation including thickness thresholds between ≥2 and ≥5 mm (15-19), and thresholds between ≥1/3 and ≥2/3 of the cross-sectional area of the sinus (6-8,20). However, previous studies have relied upon patient reported symptoms or limited anterior rhinoscopy to diagnose inflammation, without endoscopic confirmation (6-8,21). The single previous study that employed validated endoscopic examination included only cystic fibrosis patients with chronic sinonasal dysfunction (22). In order to endoscopically confirm that incidentally detected MRI mucosal thickening does not represent clinically significant inflammation, a population with endoscopically accessible sinuses but no chronic inflammatory sinus disease is required. This study included post-operative tumour patients, who have had their sinus cavities opened for resection of their disease but without CRS, to provide the first endoscopic assessment of the clinical significance of MRI mucosal thickening.

The lack of correlation between MRI assessment and patient symptoms noted in this study is consistent with the literature. Some previous studies have identified a lack of correlation between SNOT-22 and objective measures, such as endoscopy and CT assessment (23-25). Several articles have found that postoperative endoscopy, as assessed by the Lund Kennedy score, the Modified Lund Kennedy Endoscopic Score, or the MLMES, is better correlated with SNOT-22 and particularly the Rhinologic and Extranasal subdomains (10,25,26). However, these studies only use CRS patients, while this current study excluded CRS patients to assess changes only in those in whom no underlying condition might contribute to symptom adaptation. In conjunction with these previous findings, this study affirms that radiology alone is not sufficient for a determination of sinusitis and should be used alongside clinical evaluation to determine those in need of investigation and management.

This study is associated with certain limitations. Measurement of MRI outcomes was conducted once by a single investigator, meaning that the inter-rater and intra-rater reliability of MRI measurement could not be determined. In addition, given that most patients in this study underwent central skull base or ethmoid tumor resections, relatively few frontal sinuses were included in analysis. Surgical cavity walls that were reconstructed using nasoseptal flaps were not excluded from analysis, introducing a potential confounder that must be considered.

The authors would like to thank both the staff of the Sydney Ear Nose & Throat clinic, and members of the Rhinology group at the St Vincent’s Centre for Applied Medical Research for their support.

Reporting Checklist: The authors have completed the STARD reporting checklist. Available at https://www.theajo.com/article/view/10.21037/ajo-22-9/rc

Conflicts of Interest: All authors have completed the ICMJE’s unified disclosure form (available at https://www.theajo.com/article/view/10.21037/ajo-22-9/coif). RH serves as consultant/advisory board with Medtronic, Novartis and Meda pharmaceuticals and as the Editor-in-Chief of Australian Journal of Otolaryngology. He receives research grant funding from Glaxo-Smith-Kline and has been on the speakers’ bureau for Glaxo-Smith-Kline, Astra-zeneca, Meda Pharmaceuticals and Seqirus. LK is on the speakers’ bureau for Care Pharmaceuticals, Mylan and Seqirus Pharmaceuticals, and he serves as an unpaid editorial board member of Australian Journal of Otolaryngology from January 2019 to December 2022. The other authors have no conflicts of interest to declare.

Ethical Statement: The authors are accountable for all aspects of the work in ensuring that questions related to the accuracy or integrity of any part of the work are appropriately investigated and resolved. The study was conducted in accordance with the declaration of Helsinki (as revised in 2013). The study was approved by the St Vincent’s Hospital Human Research Ethics Committee (SVH HREC 09/083). All participants provided informed and written consent for their use of their medical data for research.